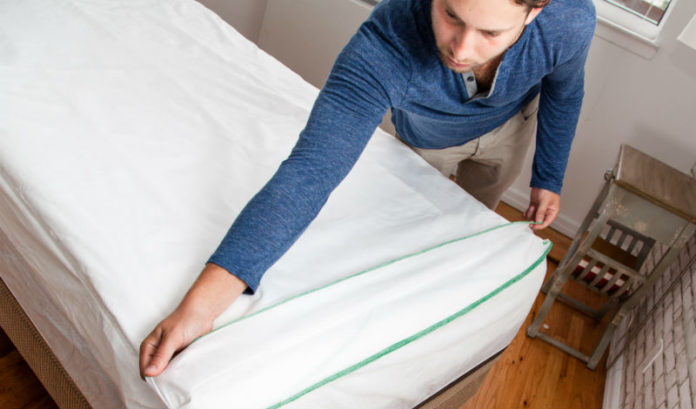 Maxwell Cohen said his family has been starting businesses for 40 years and investing in them for 20.

“My family has a rule that, before you turn 27, you have had to at least attempted to start a business,” Cohen, 27, said. “Our family motto is fail fast or realize the time and experience it takes for an idea to become a successful reality.

“Which means the younger you are when you start, the less you have to lose.”

Cohen, 27, founder and CEO of Peel Away Labs, started executing his idea for his Jersey City-based product while studying environmental and water resource economics at the University of Arizona.

“I noticed my friends would never wash their bedsheets,” Cohen said.

Stripping the bed, washing the laundry and remaking the bed was time-consuming and annoying for his friends, Cohen said, despite health experts’ recommendations that sheets be changed every seven to 10 days due to bacteria, fungi, dander, pollen and other microbes.

“I thought, there’s got to be an easier way,” Cohen said.

One, he added, that also would reduce consumption of electricity and water, as well as the amount of chemical pollutants in water systems.

He created sheets for dorm rooms (Dorm-A-Peel) and summer camp (Camp-A-Peel), Cohen said, but fell short after appearing on ABC’s “Shark Tank” in 2015, as he sought $100,000 for a 20 percent equity in his company to further move into the retail market alongside traditional bed sheets and mattress protectors.

“I filmed that when I was young, and the company was even younger,” Cohen said.

The sharks’ complaints? The sheets weren’t soft enough and the market wasn’t responding.

“I was still going through beta-testing and selling only to a few markets I was familiar with,” Cohen said. “So, I took their advice to move toward different markets while also working to make the product softer.”

Cohen improved his products, specifically targeted the home and health care markets, acquired warehouses in Edison, as well as office space and a storefront in Jersey City, and raised $1.3 million with New York Venture Partners, Alpine Meridian Ventures and a number of East coast angel investors and venture capitalists before officially rebranding as Peel Away Labs in 2017.

“When you’re changing a habit and creating something new for a need that isn’t specifically sexy, it does take time to educate the consumer,” Cohen said. “But the consumers that do use our products are repeat customers, which gives us the confidence to continue scaling the business.”

Sold in more than 1,500 Walmart locations, as well as online with Amazon, Bed Bath & Beyond, Zulily, and buybuyBaby.com, Peel Away Labs also is beta-testing with 30 Walgreens locations and more than 200 durable medical equipment stores, as well as having secured hospital distributors Cardinal Health and McKesson.

“The health care market has been very good to us when it comes to testing and sampling the product,” Cohen said.

Research found nurses often spend more than 15 minutes per bed changing sheets, Cohen said, while hospital facilities spend up to $37 billion — and utilize nearly 315 gallons of water per patient bed per day — on linens and laundry.

“We see Peelaways becoming a global, everyday product in health care facilities around the world, with our distributors overseas building their customer base and changing people’s habits to need a product like ours,” Cohen said.

Starting in South Africa, where the Netcare Group, South Africa’s largest private hospital network, has launched a pilot program with Peelaways, and in Asia, where IDS Medical Systems, the continent’s leading medical supply chain company, has signed on to distribute Peel Away Labs products to health care facilities.

“Since each sheet in a health care facility is unique to one patient and one patient only, we believe our disposable sheets can help lower hospital-acquired infections,” Cohen said.

In the U.S., Peel Away Labs is targeting the home care market, Cohen added.

“There is an aging population that wants to stay independent for as long as possible for which a simpler fitted sheet would be easier,” Cohen said. “And, if a person cannot get out of bed, a caregiver can still change the sheets within 60 seconds or less.”

The second-biggest market in the U.S., unsurprisingly, is potty-training toddlers, Cohen added, preventing parents from having to change and wash sheets in the middle of the night while caring for a crying baby.

“We believe Peel Away Labs products have a place in almost every household,” Cohen said.

Cohen said he set out to change the world in college. With Peel Away Labs, he is now much closer to achieving his goals, he said.

“We also are always looking to become more and more green, moving toward a product that is 100 percent biodegradable,” Cohen said. “We are looking forward to achieving that mission within the next 12 to 18 months as we continue to grow.”

Why ex-Horizon exec founded new business in NYC, not N.J.