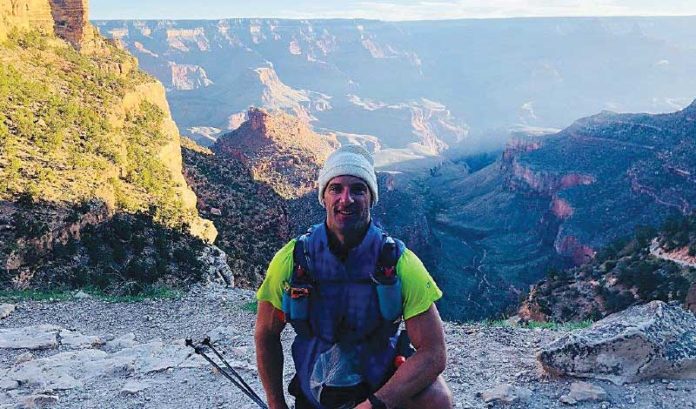 Enclosed in rock all around and plunging into the heart of the Earth, Keith DiMarino came to a few epiphanies about the business world above.

The owner of West Deptford-based DocuVault was among other entrepreneurs that recently braved the grueling trip into one side of the Grand Canyon and out of the massive gorge at its opposite end.

And the roughly 50-mile journey is one he’d recommend as more than a “maybe someday” bucket list item for the courageous. Company executives, he said, could get a lot out of pushing themselves to do it soon enough for it to make an impact on their approach to life and business, too.

Just don’t let his retelling of the 6,000-foot descent and ascent of about the same amount on what’s referred to as the Grand Canyon’s Rim-to-Rim-to-Rim route scare you off of what could be the most heroic of New Year’s resolutions.

“At one point, it was like a movie scene — something out of ‘The Last of the Mohicans’ — with us following a 3-foot-wide path up a cliff with a 1,000-foot drop just off the side of it for many miles,” he said.

As much as an entrepreneur such as DiMarino may be prepared for risk, even he was initially hesitant about a nothing-to-scoff-at jaunt through the Colorado River-carved canyon.

He was pitched on the idea by Jack Daly, a sales coach who has run more than 90 marathons.

Daly called to ask DiMarino, a CEO who could claim only a modest physical activity regimen, if he could do a two-day hike notorious for its difficulty.

He couldn’t imagine it; he said no.

But what convinced him was the experience his 12-year-old daughter was having at the time, he said. She was suffering a chronic, months-long migraine attack that had them searching for answers from doctors.

“So, as I’m watching her go through this out-of-control physical situation, here I am hanging up the phone saying I can’t do this hike,” he said. “If she’s able to deal with all that, I wanted to be able to do something, too. So, I called him back and said, ‘You’re nuts, but let’s do it.’”

Part of DiMarino’s inspiration was that it served as an opportunity to raise money for research at the Children’s Hospital of Philadelphia and awareness of this rare pediatric migraine problem.

He had four months to prepare for the massive undertaking — the ups and downs of elevations and the temperatures, which can vary more than 40 degrees and reach a blistering 100 degrees Fahrenheit in some portions.

It was a long hike, he said — that was no surprise. But the actual experience of traveling that distance was extra difficult, with malfunctioning GPS systems and few landmarks to track progress.

“Because of that, we’d get to the end of one switchback and there would be another one — that you thought definitely would be the last one,” he said. “And, sure enough, there would be 20 more behind it. That mentally beats you up, because you want to push hard to get to finish. But you can’t exhaust yourself if you’ve got a lot more to go.”

The entrepreneurial voyagers planned well for the food part of the journey, but the park happened to have a broken water line that limited the group’s access to water stations, particularly on the steep climb at the challenge’s final canyon rim.

Tired and without water for miles, DiMarino said one of the group’s most physically fit members felt too fatigued and dehydrated to go on.

“I was trying to encourage him to continue before, eventually, he said: ‘That’s it. I’m sitting here and when you find water, bring it back to me,’” DiMarino said. “And, then, just around the corner from where he stopped, there was a cave entry where it was 15 degrees cooler and water just steps beyond that. What I took from that is a lesson in how many times in life we may give up when we’re right where we need to be and just don’t know it.”

Such lessons are what DiMarino treasures as takeaways for his own daily experience as a CEO.

“I’m ashamed of how this started, with me hanging up a phone saying there was no way I could do it; I think we have a tendency to be self-limiting in our thoughts and actions,” he said. “When it comes to our business and careers, I think we can be similarly self-limiting. And it’s important to get beyond that.”

DiMarino certainly has his own uphill situation as the head of a records management company, the only private company of its sort in South Jersey. The business of paper documents — shredding, storing and the like — is challenged by the rise of cloud storage and other trends.

Regardless, DiMarino and his wife, with whom he has bootstrapped DocuVault from its start 15-some years ago, persevered. They even have a growing business — one of the nation’s fastest-growing in this industry, actually.

“We have to outperform in this business — it’s not easy,” DiMarino admitted.

But, like the journey he took, he has a way to go before reaching all his goals in the business world — and don’t expect him to stop before he’s done.