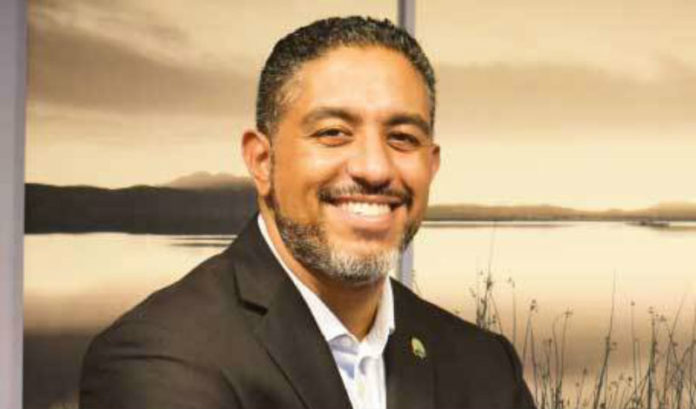 After a successful two-year stint at the Hudson County Office of Business Opportunities, Rafael Mata has been scooped up by the state and is now working for the Schools Development Authority.

His partner at the Hudson County agency, Jermaine Pharmes, has taken over his role as director.

His track record of doing so, through a competitive bidding process, was noticed by other counties around the state, which then implemented the same process he developed in Hudson County.

Now, Mata has a state agency to help do the same. He began his new job Jan. 2.

“This is definitely not a desk job,” Mata told ROI-NJ in a recent phone interview.

He has already taken a tour of a half-dozen schools — and that was on Day Three.

The new position, managing director of external affairs, gives him both the opportunity to expand his work from the county to the state level, as well as potentially help create a pipeline of more diverse contractors to work with the state, filtering up from the county levels.

That, at least, is one of his goals.

“What’s really great is, probably within the next month or two, I’m looking to engage local offices to recognize businesses ready for state contracting, or people close to ready, to help them get to that point,” Mata said. “I thought that was going to get resistance, but they are giving me the wheel and (are telling me) drive the car.”

And, just like he renamed the now-Hudson County OBO, Mata anticipates helping the SDA create a more inclusive title for its small women and minority business group — referred to internally as “swimbee” — so it can also reflect the inclusion of veteran-owned businesses.

All to help fix some of the most impoverished schools in the state.

“My role here is going to be to try to beef up and show the (benefit of) economic development of fixing these schools,” Mata said. “It’s not just about rehabbing schools, but how the community rallies around those schools, how you create jobs and increase revenue for businesses who ultimately hire in the community. The endgame is to complete the schools on budget, do that with more local businesses, preferably minority-, women- and veteran-owned. The sense I get is, it’s the same old characters getting contracts all the time. There’s lots of opportunity here.”

And, with the increased pot of funding at his disposal, Mata has no doubts he can achieve his goal.

“The amount of stuff that I’m going to do here in a year is probably going to dwarf what I did in two years (at Hudson County),” he said.

What remains to be seen is how much the state funds the SDA in the upcoming year and, of that, how much will go towards the program Mata oversees.

Regardless, Mata has set his sights on achieving the goal of diversifying contracts and, if all goes well, pitching the Treasury department, and Chief Diversity Officer Hester Agudosi, on implementing the successful program statewide.

“It’s like they took the training wheels off me,” Mata said about his new role.

As companies — and Rutgers symposium — pivot during pandemic, they can’t let up, business experts say