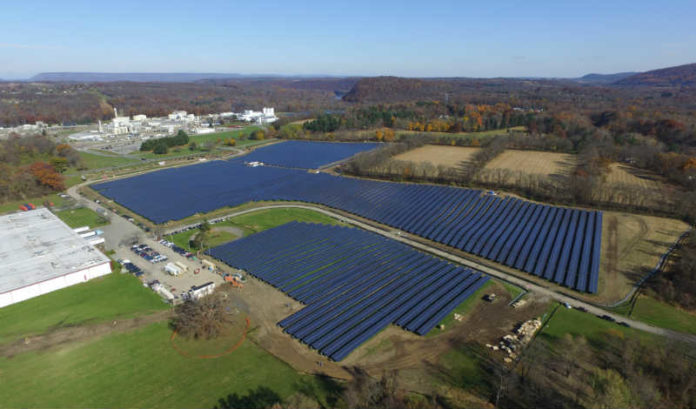 DSM will hold a ribbon-cutting Thursday to celebrate the completion of its solar field project in Belvidere.

With approximately 62,000 panels spread out over 60 acres, the company said, it will be the largest net-metered solar project in the state and the second-largest on the East Coast, trailing only a solar project by Apple in South Carolina.

When the field is operating at full capacity — a sunny day during the summer — DSM North America President Hugh Welsh said, it will produce enough energy to run the company’s manufacturing site at the location with some energy leftover to sell back to the grid.

Welsh said the completion of the second phase of the project — phase one, approximately 20 acres, was started in 2014 — is another example of the company’s commitment to renewable energy.

Even more, Welsh told ROI-NJ, it has contributed to the bottom line.

“It’s smart business that will actually save a considerable amount of money on energy costs,” he said. “From a cashflow perspective, it’s seven figures. I don’t want to give specifics because it’s proprietary, but it’s a significant cost savings. And it makes us much more efficient.”

“We’re a company that anticipates there’ll be a price on carbon in the future,” he said. “What form that takes, who knows, but it doesn’t matter.

“There’s going to be a price on carbon in one way, shape or form going forward. This makes us a ‘future proof’ or ‘fit for the future’ in an environment where energy produced through traditional means, be it coal, gas or oil or natural gas, is going to be much more expensive.”

Welsh appreciates the irony of the business outlook.

DSM, which stands for Dutch State Mines, began as a coal company more than 100 years ago, he said.

DSM North America, which is headquartered in Parsippany, now calls itself a global science-based company in nutrition, health and sustainable living.

The company’s Belvidere manufacturing plant is proof of that, as it produces products related to Vitamin C, Vitamin E, Omega 3 and different types of feed ingredients.

Welsh said the transformation has been a key to company’s sustained history of success.

“Over the last century, we’ve been very good, but also conscious of evolving and adapting to the changing needs of not just the business environment, but the world,” he said. “We’ve divested ourselves, of course, of the coal business and the chemical businesses, and got into nutrition and clean energy for that reason.

“We see this also as an example to other companies, other manufacturing companies, that you can evolve and adapt to make yourself fit for the future or future-proof as well.”

All while improving the bottom line, Welsh said.

The expansion will double the site of the initial field, have more metal than the Eiffel Tower, completely power the company’s warehouse and even put energy back on the grid.

The Belvidere project becomes a 20.2 MW solar generation facility that will provide approximately 23,437 MW-hours annually and is expected to produce an annual excess of 3,460 MW-hours of electricity, which will be sold to the grid.

The now-60-acre, 62,215-solar-panel field effectively will triple the solar output at the site and will be equivalent to:

Welsh said he is eager to get going Thursday.

He just has one request:

“Hopefully, it will be sunny,” he said. “So, when I flip the switch, the meter will move.”