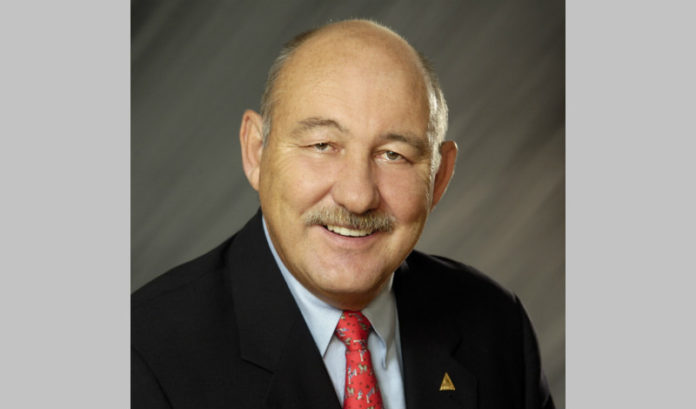 Gregory Scharpf summed up the more than five decades his father George spent at Amboy Bank this way:

“George was competitive in business; he wanted to win — but never at the expense of his deeply-held values of honesty, integrity, loyalty and sense of fair play,” his son said.

“With more than 50 years at Amboy, George personally knew almost all of the bank’s commercial customers. He was available to them in good times and, more importantly, in tough times. Clients appreciated his advice, but valued his old-school banker style even more — when you left a meeting with George, you knew where you stood and the terms of the deal were set.  His word was his bond.”

Gregory Scharpf, formerly the chief operating officer, has been named his successor as CEO and president.

Joseph J. DiSepio, vice chairman of Amboy Bancorporation, said Scharpf believed the bank was only as good as its employees — and was determined to make sure the employees were rewarded for the bank’s success.

“George would often say that the bank will only be successful if our clients are successful; and if our employees, who are responsible for delivering superior service and products, share in that success as well,” DiSepio said.

Today, Amboy employees and retirees own approximately 20 percent of the corporation as a result of the employee stock ownership plan Scharpf instituted at the bank.  He considered it one of his proudest achievements.

DiSepio, consistent with the company’s succession plan, will assume the role of chairman of Amboy Bancorporation.

In addition to the elevation of Gregory Scharpf, the board of directors has promoted Eric Scharpf, current Amboy Bank and corporation board member, to the additional role of vice chairman of Amboy Bancorporation.

George Scharpf started his career at Amboy in 1969 and became its CEO in 1981.

Although the Great Recession of 2008-2009 tested his leadership mettle, Scharpf steered the ship through the financial turbulence with the steady hand of a highly experienced and confident captain, bank officials said.

Scharpf leaves Amboy Bank in the strongest financial position in its history. Profit margins have recovered; the bank has earned more than $160 million over the last five years, including approximately $30 million in 2018. At year-end, the bank’s equity capital ratios ranked above 95 percent of its U.S. banking peers.

In the coming days, Amboy Bank will schedule a “Celebration of Life” event for those in the community who want to meet and share stories about Scharpf and their relationship with Amboy Bank. Please check amboybank.com for future details.

Gregory Scharpf was quick to offer his story of his father.

“He led by example — at the bank, in the community and at home,” he said. “His accomplishments as CEO of Amboy Bank were only surpassed by his success as a father and husband.”

Krom has grown into leadership role at SKC; now, she is...