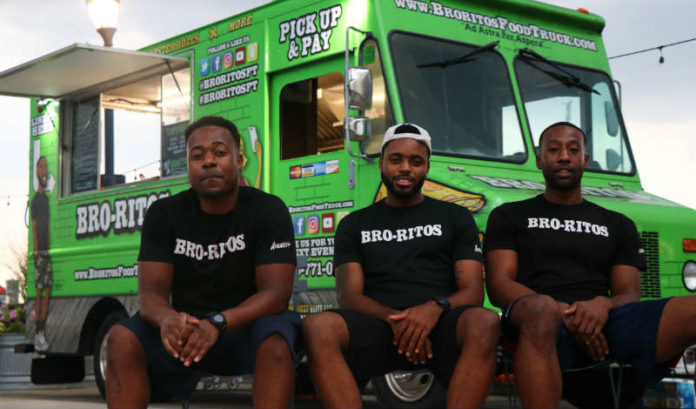 “November through March is typically slow for food trucks because no one is outside and there aren’t many events,” Crawford said. “But we’ve been able to fill our calendar with private catering business.”

Crawford, who first accepted a position in marketing and sales with The Original Soupman after graduating from Florida International University in 2010, said he thrives on the entrepreneurial challenge.

“I learned about the food business there from the ground up, but, being in an office environment, I always was trying to find a way out,” he said.

Crawford successfully pitched the company the idea of starting its first food truck concept under a franchise agreement in 2012.

But, when management at the company began mishandling debt, Crawford said it was time to go.

“I had put some money aside and was able to purchase and build out a truck from Craigslist using zero-interest credit cards,” Crawford said. “I saw what trucks were already in the industry and thought, ‘What’s still needed?’”

Crawford said he and his co-founder, Jonathan Gibbs, were deciding between chicken wings and burritos.

“But, when we saw the line out Chipotle every day at lunch, we knew there would be demand,” he said.

Based in Old Bridge, Bro-Ritos has become a six-figure business since Crawford and Gibbs created the concept in 2016, with recipe input for burritos, tacos, quesadillas and more from family and friends.

But that’s not to say there haven’t been setbacks, Crawford said.

“After our first food truck event in East Hanover, Bro-Ritos broke down,” Crawford said. “When I finally got the truck to start, and we started driving on the Garden State Parkway, we blew the motor.

“We basically worked one day and had to take three weeks off while we got the motor replaced.”

The co-founders soon worked out the kinks, Crawford said, and began strategically growing their business.

“For example, when we were first started, festivals were a home run for us,” Crawford said. “But, when attendance steadily dropped off, we started marketing for and booking more guarantees, such as catering and private events.

“We also started hanging around corporate-oriented locations, where hungry employees knew to come outside to the truck, as opposed to us parking on the street and hoping people would show up at the window.”

Though Bro-Ritos still can be found at festivals from time to time, including the Jersey Shore Food Truck Festival, Crawford, Gibbs and Crawford’s cousin, Jarid Thomas, are more likely to be found at private events, such as weddings, graduations and birthday parties, as well as corporate events, including those for Verizon, Party City and UPS.

Bro-Ritos recently was honored by New Jersey Black Businesses’ Best in Black Business Awards, in the “New Business” and “Young Entrepreneurs” categories, for its success.

“To be recognized for the work that we’re doing and the delicious food that we’re serving to our customers and corporate clients is incredibly gratifying,” Crawford said.

Looking toward 2019, Crawford said the idea is to expand Bro-Ritos’ reach while diversifying its menu.

“My goal is to grow Bro-Ritos into a business that can be of generational wealth,” he said.

“A business and financial coach broke down our numbers to provide extra guidance in what we need for the business to grow,” he said. “The program reaffirmed ideas I had in my mind and showed me how to make them a reality.”

“We’ll be looking to open up a storefront restaurant this year, as well as get a second truck on the road, to more than double our revenue,” he said.

“We’ve done nearly 30 activations with Partida Tequila alone at various samplings around the state, offering tacos to those who sample the product,” he said.

Lastly, Crawford and his team began producing a reality web series for YouTube, featuring 6-minute episodes documenting what “life on the truck” is like.

“My day typically begins at 7 a.m., checking emails and loading the truck before we hit the road at 9 a.m. to get to wherever we need to by 10 a.m.,” Crawford said. “We’ll serve lunch from 11 a.m. until 2 p.m., break the truck down and then travel to our next destination for the dinner shift from 5 p.m. to 9 p.m.

“Then, we drive back to the commissary, clean the truck and get ready for the next day.”

It takes a lot of time to run a food truck, Crawford said, especially with there only being three of them.

“But we just get through it and keep on pushing,” Crawford said.

Marcus Crawford, co-founder of Bro-Ritos, said that, in addition to using Twitter and Instagram (@broritosft), to let New Jersey where the food truck will be and when, the New Jersey Food Truck Association also has helped it develop new business.

“If someone searches for food trucks in New Jersey on Google, the association is the first item to pop up,” Crawford said.

However, not offering a statewide license of health and fire inspection dramatically increases Bro-Ritos’ cost of business, Crawford added.

“We have to pay a permit fee at every city, township and county that we go to,” he said. “Over the course of the year, that adds up.”