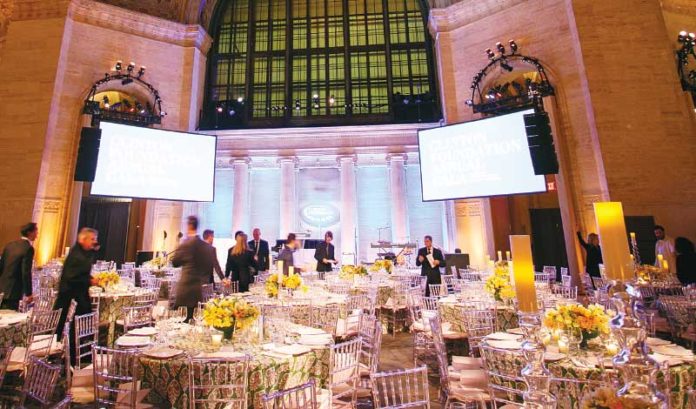 A sought-after keynote speaker or carefully-curated panel is delivering remarks when … the microphone cuts out; the sound is muffled; or, worst of all, there is vexatious feedback.

And those running the show don’t quite seem to know how to resolve the issue.

So, the speakers proceed as is, the audience disseminates and, in the days following, no press appears about the event due to journalists’ inability to understand what was being said.

That is precisely how too many events are being foiled by poor audio.

But it doesn’t need to be that way, according to three audio-visual production companies in the state.

KM Productions was founded in Secaucus in 1998. The event production and rental service with long-term clients such as Tiffany & Co., Land Rover, the Clinton Foundation and the Governors Ball Music Festival relocated from Long Island to New Jersey in April to more easily access popular venues in Manhattan and nationwide.

“We operate within a ‘big enough to service, small enough to care’ mentality,” founder and President Kevin Mignone said.

Reid Sound, an audio-visual production company and installation service in Windsor, has been serving clients such as Princeton University, Johnson & Johnson, Grounds for Sculpture and George Street Playhouse since 1999.

“Being located in central Jersey gives us the great opportunity to serve both the Philadelphia and New York City markets, as well as New Jersey itself,” owner and President Darren R. Sussman said.

And, for nearly 55 years, Audio Visual Dynamics in Hackettstown has been working primarily with Fortune 500 companies in the financial, telecommunications and pharmaceutical industries to host large corporate events worldwide.

“We create strategic partnerships with our corporate clients to then travel around the country and even sometimes internationally with them for their sales and clinical meetings,” President Chris Broening said.

ROI-NJ sat down with these industry veterans to find out how audio can break or make an event.

Here’s what they said to do — and what not to do — when planning for the year ahead:

Kevin Mignone: I ask three questions of potential clients: How many people will attend the event? How big is the space? And what is your overall goal?

If a client is hosting a cocktail party where a single speech will happen, they may need just momentary engagement, but will still require a distributed sound system to cover the desired area at a volume in which people also can still socially engage.

An 80-person and a 200-person keynote, however, require very different audio systems and infrastructure, with the major outlying component being the size of the space. If only 80 people attend, but the room is enormous, you may require additional audio to ensure you are pointing the sound at the affected area rather than throwing sound into more cavernous parts of the venue.

Darren Sussman: It is a mistake to assume that every event will play out the same way. It honestly sometimes frustrates potential clients when we seem to ask more questions than necessary about an event, but we truly need to understand the specifics, such as: What is the layout? Will people be seated at tables or mobile? Will one person be delivering a speech at a podium or will there be multiple speakers wandering around the room with microphones? Will there be a question-and-answer session?

If we do not understand the flow of the event, all we can do is throw equipment at it, tell a staff member to show up and wing it, and that is not the way to have a successful event.

Chris Broening: We ensure that the information our client is trying to convey is done so in a way that keeps their audiences’ attention without disruption. The audio and visuals must be consistent, presented in a timely fashion and able to be cued up for when the presenter needs them.

The person in the front row should hear equally as well as the person in the back row, without echo, which requires a lot of mixing in order to make the audio sound clear and articulate throughout.

ROI: How critical is audio to the success of an event?

DS: We often don’t notice the audio until it is not working, and then it is the only thing we can notice. It doesn’t make much sense that audio is the last thing people think about when planning an event, because if, for example, Johnson & Johnson is calling its employees together to listen to the CEO explain why they had such a fabulous year, if we can’t hear him say that, why are we even there?

There is a natural instinct for hearing human beings to take audio for granted, and, because we can’t see it, we often don’t think about the fact that someone needs to take care of that until it is too late.

ROI: What are the most common mistakes made when it comes to audio?

DS: Not getting an audio-visual vendor involved early enough, and therefore making decisions that negatively impact the ability of the vendor to do their job, and choosing the cheapest vendor instead of the one that is most suited to accomplish the job correctly.

There often is no or too little a budget for audio, because clients do not want to spend money on something so simple. But what they don’t realize is how much work goes in to making audio seem completely effortless.

KM: You can take the world’s best audio systems, deploy them in the best way possible for the venue and make the event sound terrible by putting someone incompetent or less than professional at the helm. It’s a combination of choosing the right gear and the right people to run it.

If your keynote speaker is presenting and their lavalier cuts out, within five seconds, someone should be on stage with a handheld mic to immediately let the keynote take back over. I’ve watched 30 seconds go by before someone even reacts to the problem.

CB: Clients often don’t believe that meetings of between 30 to 50 people would warrant needing an audio system. We need to convince them that they do, in fact, need sound reinforcement in a room that may or may not be proficient for a presenter to be heard. If the speaker has a loud, projected voice, no, you may not need it; but we often work with speakers who are very quiet, even when we mic them.

On that note, turning up a lower-level, smaller sound system that is not sufficient to cover the space will simply result in more distortion. We ensure we provide the right technical equipment to match the size of the audience and space.

ROI: What should clients expect to pay for quality audio at an event?

KM: I generally tell people to spend $100 per person on sound — that gives you a ballpark cost of what it takes to provide quality audio in a generic environment, with wireless microphones, distributed audio, a mixing console and professional staff. However, that scales up only to a certain point — if you’re spending $7,500 for a 75-person event on audio, you can expect to spend maybe $10,000 for a 200-person event based on a gross discount metric.

I typically tell clients that what we are offering is the proper coverage to allow their entire audience to have the best seat in the house — then, if the budget remains an issue, I will say, this is a slightly less expensive alternative that is between the budget you need to be at and what I need to be at. But we will never do anything halfway or on the cheap, because we care for our clients as much as I hope they care about their event.

DS: The reality is there is almost always someone out there willing to provide these services for cheaper, but it is a question of whether they are going to do it right. A client may find someone who accomplished their goals for the event just as well for a lower cost — this time. But it’s always hard to say what will happen the next.

We try to hold ourselves to a certain standard of quality by paying and sending you the right people who we know can do the job correctly. What we want is to get in and complete the event without the client even noticing we were there. But that is one of the things that makes what we do so difficult, because, if we do our job right, nobody should notice, and that is why people often take audio for granted.

ROI: How do you respond to potential clients who are working within a specific budget?

KM: I’ve found that budgeting before conversation hurts most clients. If they approach our production company and say they’ve got $1,000 in the budget for their event, I’ll ask, where did they come up with that number? Sometimes people are forced to work within a fixed number that comes down from teams above them, but it provides no value to dictate the quality of what they will get. A lot of times, someone will say, ‘We did this event last time with two speakers and microphone and it cost this much.’ Then I ask if they were happy with that event, and they say no.

Price is one of the most difficult conversations to have, especially when they’ve consistently received bad service — new clients are almost afraid to pay for good service because they tend to expect the same level of bad service again.

CB: We pride ourselves on the fact that, if there are technical difficulties, and there can be when dealing with equipment, we have the proper backups in place. The audience usually doesn’t even know that we’ve had a technical issue.

With our real competition being hotel-provided audio-visual services, providing critical backup equipment at no charge is one of our key value propositions.

DS: We always work with our clients to come up with the best solution. Typically, I initially explain why I feel the budget we’ve proposed is appropriate for what they are trying to accomplish. Then, I’ll offer some alternatives without compromising the entire event. But there is a point at which I have to say, I can’t cut down further than this and still achieve your goals.

ROI: What advice do you have for those planning events in 2019?

DS: Once a client knows the date and venue for an event, that is when we can and should get involved to help make decisions that a lot of times people don’t ever think about. For example, if we receive floor plans for an event that already is set, and every inch of space is already taken up, where can we put our speakers and equipment? If we can help coordinate early on, we can make sure things like that go successfully and seamlessly for both us and our client.

KM: Start developing a relationship with a production company early for each and every event. If you are planning an event in June 2019, and you call now and say, ‘I’m thinking about planning this event at this venue,’ you will then be able to take our ballpark estimate and scale that into the event’s budget so that there is no sticker shock or big miss that will cost you the event.

Energy & Utilities
Tom Bergeron -
October 4, 2022
The Fuel Merchants Association of New Jersey has long been opposed to Gov. Phil Murphy’s plans to increase the use of electricity in residences...

Energy & Utilities
Linda Lindner -
October 4, 2022
New Jersey Transit has made strides in its goal of transitioning to a 100% zero-emissions bus fleet by 2040. NJ Transit CEO & President...