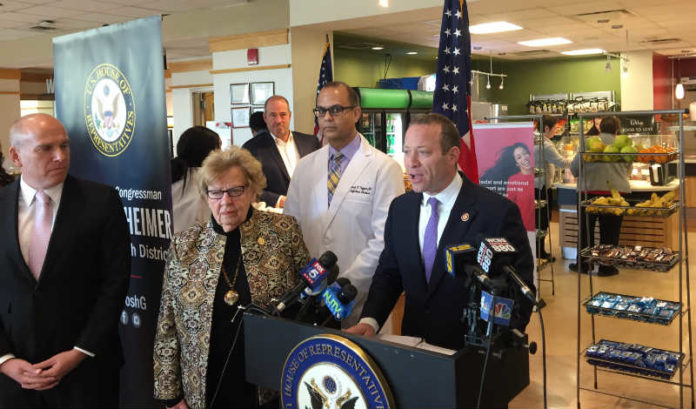 The numbers likely are higher than most people realize.

There are 48 million cases of foodborne illnesses every year, which means 1 in 6 Americans is impacted. These numbers translate to 112,000 hospital visits a year and approximately 3,000 deaths.

So said Dr. Suraj Saggar, the chief of the department of infectious disease at Holy Name Medical Center in Teaneck.

Saggar was among a group of experts called to speak at an event by U.S. Rep. Josh Gottheimer (D-N.J.) in an effort to illustrate another way the government shutdown — as of Monday, in its 24th day — is having a negative impact on the state of New Jersey.

The officials said the shutdown has resulted in approximately half of all Food & Drug Administration inspectors being furloughed, meaning the chances of a repeat of recent outbreaks (listeria in ice cream, salmonella in cereal and e.coli in lettuce) are greater.

Gottheimer — an elected official who routinely works across party lines — said he and the members of the Problem Solvers Caucus he helped form are working with Democrats and Republicans in an effort to get the government reopened.

“As you know, I take that part of my responsibility very seriously,” he told ROI-NJ after the event. “You have to get something that the Senate is comfortable with and the president is comfortable with. There are a lot of boxes to check.”

The first may be finding an issue that brings both parties to the negotiating table.

An inability for government workers to pay their bills didn’t seem to resonate with the general public. Neither did deteriorating conditions at national parks or the potential of a lessening of security in airports.

Monday was an effort to move public health — especially a situation that impacts the most vulnerable (children, seniors and those with immune issues) — to the front of the discussion.

Saggar said that, as a physician and a parent, he is concerned that so much food consumed in New Jersey will now skip inspections. He’s also bothered by the lack of a protocol should a suspected outbreak of a foodborne disease be discovered in the state.

“It’s unclear,” he said when asked what he would do — and who he would contact — should such a situation occur.

A federal government that’s currently furloughed — including approximately 6,500 workers in the state.

Gottheimer said he and other New Jersey elected officials — including Bergen County Executive Jim Tedesco — are looking to see if local and county officials can step in and do these inspections at New Jersey locations.

Gottheimer, however, said he was unsure how much jurisdiction such officials would have.

“I know they are looking at every single possibility to see where they can fill voids, as well as the other counties, and the state is doing the same,” he said.

The easiest solution, Gottheimer said, is to simply reopen the government, something he said could be done as soon as Monday.

The assembled media, however, did not let the simple idea go unchallenged.

This was hardly a group of Donald Trump sympathizers, but they flipped the script on Gottheimer numerous times: Why not just give the president the border wall he wants and end the shutdown?

Gottheimer did not have a specific answer — going instead with the standard talking points of finding “a way forward.”

And he did it, while making it clear he does support border security — just not a wall.

“I listen to the experts that we’ve met with who will actually say, ‘Here is a series of things that we can do to make sure we have the borders we need.’ Tough borders to keep out terrorists and drug dealers and gangsters.”

Gottheimer, in fact, responded to the repeated question with a question of his own.

“The question is: Why isn’t he opening the government? Why is he putting our safety and security at risk? Why aren’t we making sure that the FDA has everything that they need to do to conduct inspections.

“There are lots of questions that I find very frustrating, which is why many of us are sitting down to find a way forward. I believe there is a path forward as long as we continue to talk to each other, and I’ll continue to do that.”