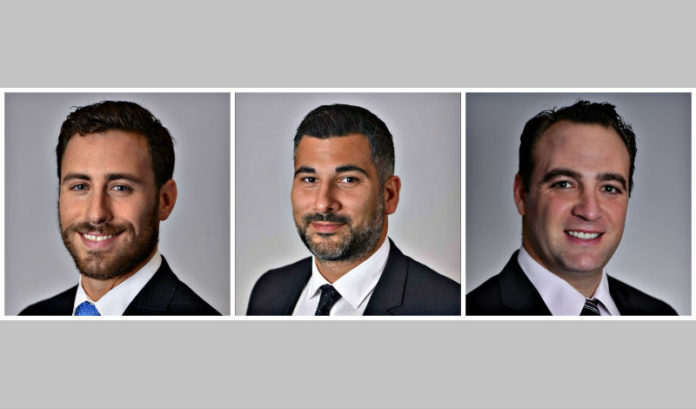 Gebroe-Hammer Associates, a multifamily investment sales brokerage firm based in Livingston, announced Monday it has promoted three of its brokers to new executive management roles.

“Once again, 2018 was a banner year for Gebroe-Hammer Associates. No other firm can compete at our level in the apartment-building sales category, especially in the New Jersey, eastern Pennsylvania and New York State region,” Ken Uranowitz, president of Gebroe-Hammer, said. “These much-deserving individuals are standouts in their own right in the multifamily sales industry. They have significantly contributed toward raising Gebroe-Hammer’s sales benchmarks year after year and have paved the way for even greater personal and firm-wide success in 2019 and beyond.”

Tragash and Nicolaou, the firm said, have been instrumental in its success since joining the firm as sales associates in 2006 and 2010, respectively.

“What makes this year, and the past couple of years, particularly momentous is that some of our brokers have achieved a rare feat – individual sales and units-sold figures that exceed the collective totals of entire multifamily divisions at competing brokerage firms,” Uranowitz said.

Over the past 12 years, Uranowitz said, Tragash has been involved in more than 100 deals and 7,000 units.

“Since day one, Steve has stood out for his affable personality, impressive intellect and tenaciousness, which are evident to all with whom he works,” Uranowitz said.

In the past 18 months, Nicolaou has closed more than 35 deals with over 3,600 units valued at more than $800 million, Uranowitz said.

“Property owners seek Niko out because he possesses rare character traits – expert knowledge of the Hudson County market, a strong work ethic and a down-to-earth personality without a trace of arrogance or ego normally associated with such success,” Uranowitz said.

Zweibel was hired by Gebroe-Hammer in 2013 as a sales associate. In five years, he closed 56 deals with over 6,000 units and $770 million in sales. Previously, he served as president of Alpha Technology Group.

“Adam has quickly risen through the ranks because he is a quick learner, has advanced technological skills and leaps over any obstacles that get in his way,” Uranowitz said.

Parker at Somerset offers the next generation of senior care