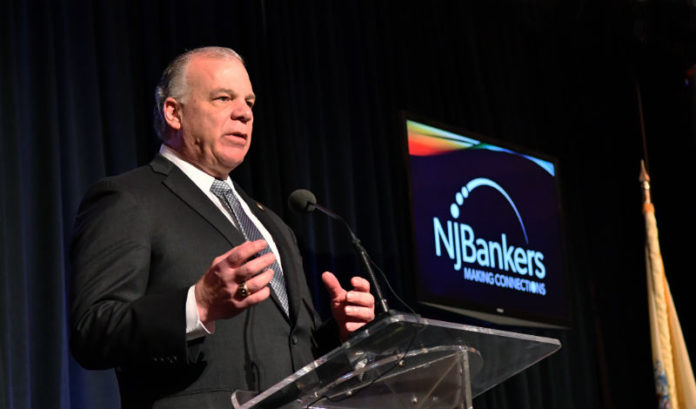 Steve Sweeney likes to quote from the movie, “Network.”

The one where actor Peter Finch, playing a television anchor, instructs his viewers to open a window and shout out, “I’m mad as hell and I’m not going to take it anymore.”

Some say 1976 was the start of a downward spiral for the state. Others say it came much later, when the state started kicking the can down the road in regard to funding our (overly generous) state pension obligations.

Regardless of when it started, Sweeney said the time to start yelling about it is now.

The state Senate president — in his typical tough-love, straightforward stump speech — spelled it out in no uncertain terms to a room filled with hundreds of top banking leaders at the New Jersey Bankers Economic Leadership Forum.

“If we don’t reverse the trend that we’re in right now, we’re in a death spiral,” Sweeney (D-West Deptford) told the group. “I’m using pretty hard words, but you know it. You’re in this world, you’re dealing with it.”

Sweeney rattles off the problems with the underfunded pension system and rising health care costs, explaining how those two issues command all of the state’s revenues — leaving other items, such as investment in education, on the sideline, he said.

“We’re not making proper investments because we don’t have new money,” he said. “So, each year, we’re in a situation where we just continue to squeeze, squeeze, squeeze programs that would make things better, just to fund government. It’s time to fix it.”

As the Senate president — arguably the second-most powerful man in the state — Sweeney seemingly would have plenty of means at his disposal to make change.

But, without saying it, he knows he is in a stalemate with the only person that ranks higher: Gov. Phil Murphy.

That’s why he’s appealing to the people in an effort to deal with the state’s fiscal crisis in the manner in which he feels is the best way — following the Pathways to Progress report that a bipartisan group he formed produced.

“We’re in a crisis,” he said. “People in this room are leaders. We could use help. I can tell you right now, we’re asking people to look at our Pathways to Progress report.”

He wants people to yell out of their 2019 windows.

“The big thing I’m asking for is help,” he said. “I feel like I’m yelling (‘Fire!’) in an empty room. We have a crisis and I don’t like talking about it like (I’m) overselling it. We can show you the numbers. Look at the Pathways to Progress report. We are in a situation in New Jersey where, if we don’t do something quickly, the game’s over.

“We have problems. I am trying to enlist an army of the people of this state (to help solve them).”

A quick check in the room at the NJ Bankers event showed he gained some.

Jim Hughes, the noted economist from Rutgers University who delivered a tough-love presentation of his own, said Sweeney’s words resonate with the audience for two reasons.

“He does it so convincingly, and with sincerity,” Hughes said.

The second: He has the facts and stats to back up the claims.

“As I cited the census numbers, it’s 1,000 people a week leaving, there’s no way around it,” Hughes said. “Nobody’s making up those numbers.”

Bob Doherty, the New Jersey head of Bank of America and the chairman of the New Jersey Chamber of Commerce’s board of directors, said he hopes Sweeney’s words are a wakeup call to the people in the room.

“I think in the past, other than (former Gov. Chris) Christie, we haven’t really hard a lot of senior people in government saying the same things and really advocating those positions that everybody in the room already knows exist,” he said.

“So, it was encouraging to hear somebody as senior as he is, talking that way. The recognition is the first step toward resolution.”

Michael Affuso, an executive vice president and director of government affairs for the New Jersey Bankers association, said Sweeney put into words what many in the audience know — to some extent — to be true.

“I think people intrinsically know we’re in bad shape, but they don’t know the dollars and cents of it,” he said. “I think what we’ve been trying to explain to people, is you get to the point where you can’t tax anymore.

“People understand there’s a problem, but this puts a finer point on the mathematics of the problem. There’s a reckoning that has to come. I think people realize it, but there’s a lot of hard swallowing that needs to be done. People are starting to see that.”

He promised — again — that he will never raise taxes again.

The state, he said, is in a crisis.

And he’s mad as hell about it.

“We’re not in a position where we can mess around,” he said. “We can’t raise taxes and kick the can down the road. All of these things that we’re dealing with, we’re in an absolute fiscal crisis of a level that people have no idea.

“That’s why I’m going around in these groups and talking to people. If we don’t change by 2023, we’re going to have a $4 billion deficit.”