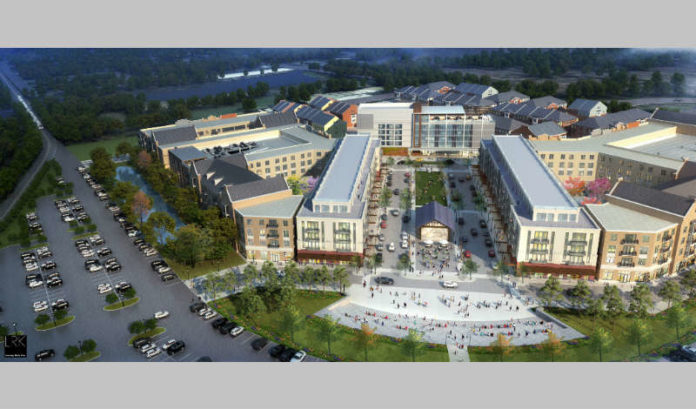 More than 800 units of housing — rental, for-sale and age-restricted.

A 120-room hotel with a rooftop restaurant.

A train station with easy access to the Northeast Corridor, allowing passengers to easily get to and from everywhere in between New York City and Washington, D.C.

It all adds up to a $300 million mixed-used destination for Central Jersey that AvalonBay New Jersey head Ron Ladell feels will rival those in other areas of the state.

The always-enthusiastic Ladell can energetically promote his projects as well as anyone, but even he admits it is not an exaggeration to say the transformation and rejuvenation of the 24-acre area around the Princeton Junction train station will be the most significant project AvalonBay has ever undertaken in the state.

“This will be unlike anything in Central Jersey,” Ladell told ROI-NJ. “This is envisioned to be a downtown for West Windsor, one that is activated with energy and activity.”

Ladell said the redevelopment plan is completely negotiated and signed and that he expects a site plan to be presented by the end of the year and a groundbreaking a year later.

The project will create more than 1,000 construction jobs during the building and hundreds of others once it is up and running, he said.

Ladell said he is hopeful the project will not only draw residents but employees from local businesses, too, noting Sarnoff Research Center is nearby. As is Route 1, less than a mile away.

“So, the hope is that at lunchtime, dinnertime and after hours, they come over here,” he said.

Ladell, who has been working to set up this project for years, said he is eager to get going. And he knows he will need join forces with others.

AvalonBay is the master developer of the yet-to-be-formally-named project, but it will begin taking bids to be the co-developer on some aspects of the project (for sale, age-restricted, hotel) Feb. 1.

Ladell said one developer could do all three or it could be a combination, depending on the results of the RFP process.

“We’ll have to see how the process goes,” he said. “It could be one group doing it all or divided among a number of developers.”

Here’s a closer look at the project:

Ladell said more than 16 percent of the units will be set aside as affordable. The variety, however, is what makes it stand apart, he said.

“Among the unique aspects of this is that each component — the rental, the age-restricted and the for-sale town homes — all have an affordable component,” he said. “So, think about this: If you’re 58 years old and you qualify for affordable housing, there is nowhere else in the state where you can rent, you can live in age-restricted or buy.

“Kevin Walsh, (the executive director) at the Fair Share Housing Center, is ecstatic about this. You normally have affordable for age-restricted or affordable for rental — this has it all in one location, in walking distance to a train station, which would get you anywhere, and on-site retail.”

The age-restricted and the rental both will be connected to covered parking decks. The for-sale units will be stacked townhomes, low-rise, of 2-3 stories, Ladell said.

A rectangular grassy area bigger than a football field will be at the center of the project, with a hotel at one end and tiered seating at the other.

“My idea is that, when people have lunch or dinner and it’s a nice day, they can take their sandwich or whatever they are eating and enjoy the atmosphere,” Ladell said.

There also will be an enclosed glass structure in the middle.

“This will have electric and plumbing and all that,” he said. “You can have small events, catered events or use it to display art or host presentations.”

The area will be circled by a street open to one lane of car traffic.

The hotel will have a liquor license and be a destination for more than just overnight guests, Ladell said.

“We are anticipating the hotel to have a rooftop deck with a restaurant and potentially a second restaurant at ground level,” he said.

Ladell said he foresees a number of service retail locations (coffee shop, haircut place, nail salon), as well traditional retail shops and a bevy of food establishments. “With thousands of commuters walking very close to the retail area, we are very optimistic regarding demand.”

Atop the retail will be more multifamily. And the roof will have loft-style units that are set back, creating a deck atmosphere there, as well, Ladell said.

Ladell said he feels the area will have a great atmosphere at night, too.

“These are going to be amazing loft units, high ceilings, with a patio all the way around,” he said. “It all comes together. At night, it’s going to be like a spaceship. It’s going to light up everywhere.”

Ladell feels the project will draw a wide variety of people, many of which will come from Central Jersey.

“Demographically, I think the diversity is going to be amazing,” he said. “Look who lives in our units now, at least generically. It’s predominantly a barbell. It’s empty nesters and then the millennial generation, which, by the way, is now over 30 years old.

“They’re not all going to take the train, but if they want to, they can.”

“The hope is that this will be the place for Central Jersey residents if you want to give up your home,” he said. “Compare it to North Jersey. People want to move into Morristown because of The Green, because there’s restaurants and action there.