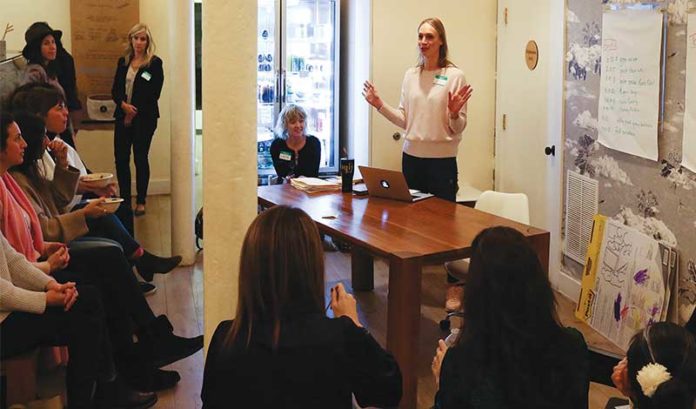 To create more revenue for her business, Kacy Erdelyi of Joyist in Montclair said she was eager to help a number of other women small business owners in the area attempt to do the same.

“There are so many women in this town doing incredible things, yet, most of the time, we sit alone in our spaces trying to solve the same problem that 20 other women are also trying to, or solving a problem that someone found a solution to a month ago,” Erdelyi, founder and owner of the organic functional foods café, said. “We should take advantage of that, rather than having to reinvent the wheel every time we encounter a new challenge.”

Erdelyi, a working mother of two who previously had a nearly two-decade career in brand and marketing strategy in New York City, said she therefore decided to host and structure monthly meetings to help inspire and exchange expertise with one another in different ways.

She started by inviting nearly two dozen women she knew, she said — but more than 50 women showed up to her inaugural meeting in January, with requests to attend more than doubling since.

“That shows there was an absolute need for this,” Erdelyi said.

However, not all who attended were women simply attempting to start or grow their businesses.

Then, after opening the floor to questions, a quiet woman who had found a seat at the base of a refrigerated display case spoke up.

Cahn said she had never had that experience, so she sought advice from the room and additional information from the woman, who said she had been an independent textile designer and author for more than two decades, drawing patterns and motifs to manufacture, print and license to companies to use on their products.

“Wait,” another woman asked from the other side of the room. “Are you Lotta Jansdotter?”

“You’re a huge success! I studied your designs in school; I know who you are; I’ve read your book!” her fan replied.

Jansdotter, just like the woman selling pom-pom hair ties on Etsy and the woman marketing her upcoming local wellness event, was here to learn just as much as anyone else — simply highlighting the fact that think tanks among women business owners are rare.

With women’s networking events often being overcrowded and saturated with similar themes, and the only other knowledge sharing typically happening between mothers at the playground, Erdelyi said she had expected a wide mix of startup business owners and more seasoned executives to attend what she thought of as the event to fill the white space for women who own small to medium-sized businesses.

Erdelyi said that is why it also was important for her to give three local businesses the chance to specifically connect with the group for feedback on a challenge they were currently facing.

At the event in January, Christine Andrukonis, founder and president of Notion Consulting, a change leadership consultancy based in New York City, sought research and data from the group about what organizations might do better in order to retain entrepreneurial talent; Kathryn McGuire, founder and art historian at Clerestory Fine Art in Montclair, needed marketing and networking assistance in order to pitch her new high-end art gallery to the community; but, then, there was Blanche Garcia, owner of B. Garcia Designs in Upper Montclair.

Garcia, an interior designer for more than two decades, already has been featured on HGTV, has co-hosted the Travel Channel’s “Hotel Impossible,” has become a certified Well AP designer (meaning she takes into consideration the inhabitant of a space as well as the structure), has started her own renovation channel on YouTube, has grown three social media accounts and has written a book.

But, here she was at a local café requesting input from a group of community-oriented women on how to efficiently incorporate her messaging throughout all the platforms that currently support her lifestyle- and wellness-oriented brand.

“I create on so many different levels and mediums that I need to constantly check in with myself to ensure continuity and reception of the messages I want to put out,” Garcia said. “So, I am here for some female boss feedback on where I should focus my energy.

“I usually am very sure of myself and what I want to do, but I also want to make sure that I am authentically connecting with each and every part of what I am doing, whether I am designing a home or building, writing a book, or speaking. How can I know for sure if I am ‘on brand’?”

Erdelyi reiterated Garcia’s question to the group to encourage the sort of feedback Garcia craved.

“What should Blanche lean into and what could she lean away from?” Erdelyi said. “Which mediums reinforce the ethos she wants to move forward with, and which detract?”

Other successful women in the room were quick to chime in.

“You said it when you first sat down that your background is in interior design, but I’m not seeing that in your deck,” Erin Crawford, a Keller Williams licensed sales associate and real estate group leader in Montclair for more than two decades, said. “I see that you are an author and a speaker, and I understand that is what you now want to market, but if you want to parlay your interior design business into a lifestyle brand, we still need to see that context.”

Jodie Dawson, co-founder of Java Love Coffee Roasting Co., an artisanal coffee roaster with two locations in Montclair and two in New York, said the show “Tidying Up” on Netflix could serve as some inspiration for Garcia.

“Marie Kondo does a brilliant job of taking organization and creating her entire brand around it, which includes changing lives,” Dawson said. “Based on all of your experiences, it would be very cool to keep design at your core while also inspiring people, to say, ‘If you design your space in this way, this is how it will help you accomplish your goals.’”

Finally, Loyla Louvis, founder of Mothers in Training, a professional parenting and life coaching consultancy in Montclair, sympathized with Garcia, after hearing herself that she “is” her brand.

“That can be frustrating to hear when thinking about next steps.” Louvis said. “But what I would encourage you to think about is that there are four types of speakers: influencers, motivators, educators and inspirational.

“I would aim to become an influencer, because, while an inspirational speaker wants to use their vision to inspire the future of others, an influencer actively helps others create a vision for themselves, too.”

Garcia, a woman with nationwide name recognition, a wildly successful career and multiple sponsorships, said she took to heart her fellow small businesswomen’s advice, and would follow through with their ideas in the next couple of weeks.

Clearly, there is a need for more women like Jansdotter and Garcia to connect on a more local and personal level with their peers in an effort to continue moving their business forward, Erdelyi said.

“I’m really interested in this feeling like a space for people who want to go big or go home — those business owners who are intent on scaling, fundraising, distributing, hiring and tackling growth-oriented issues,” she said.

The next meeting at Joyist Café is scheduled for Feb. 13, featuring keynote speaker Nikki Radzley, co-founder and CEO of Doddle & Co., a manufacturer of sanitary pacifiers in Montclair.

Space at the events is limited, but all women business owners are encouraged to contact Erdelyi for further information at (973) 337-5955.

Power of a partner: TMG able to grow its business in...