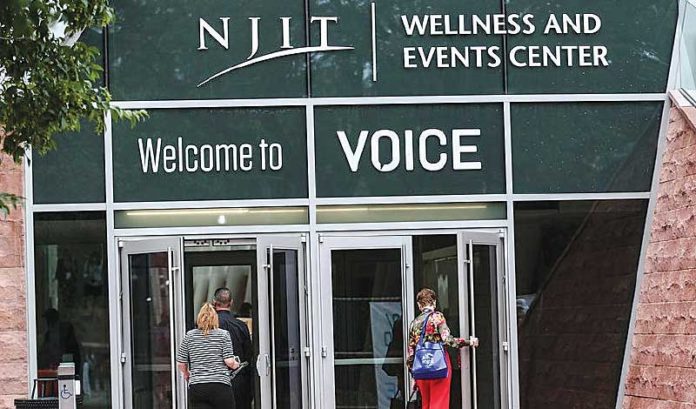 Newark officials didn’t dwell on Amazon’s decision to put its second headquarters elsewhere. They were confident they have the infrastructure and the energy to be a tech hub on the East Coast.

And they felt a few wins in 2019 would help cement that idea. They got a big one last week.

While New Jersey Institute of Technology and the city of Newark were a surprise pick for the inaugural VOICE event last summer, organizer Pete Erickson said returning to the campus and the city this summer was never in question.

“We had a lot of feedback from sponsors and attendees that the (NJIT) Wellness and Events Center was a really great venue,” he told ROI-NJ. “People were pleasantly surprised at the quality of the venue, the quality of the keynote stage, the ease of moving around, the traffic flow in and around the WEC center.”

Erickson, the founder and CEO of Modev, said working with NJIT and Newark has been great.

“The support that they have given us — and it’s continued into this year — really made the decision easy,” he said. “We’ve already started our planning calls with them and we’re really gearing up to grow the event.”

The event, scheduled for July 22-26, already has established itself as the No. 1 voice technology conference in the world. It’s why Erickson is expecting to essentially double the number of attendees (he’s hoping for 5,000) and sponsors/presenters (he’s hoping for more than 100).

So said James Barrood, the CEO of the New Jersey Tech Council, which served as a sponsor last year — and will do so again.

“The impact of an exciting and well-attended tech conference cannot be overstated,” he said. “It has signaled to the rest of the tech universe that the New Jersey ecosystem can support a large, multiday conference.

“Besides the immediate impact, the attraction of other large conference organizers to Newark and the state over the next few years is the real reward.”

To Glover, getting people to Newark is the hard part. The city sells itself after they arrive.

“Tech is booming in Newark and the always-innovative VOICE Summit producers recognize the value of being in this city over any other in the nation,” she said. “The summit demonstrated that you can bring in over 3,000 people and provide an immersive content experience that as a positive economic impact on the entire city: students, local businesses, hotels and neighborhood hot spots all benefitted from VOICE.”

Erickson said he is confident this year’s version will be even better than a year ago, when a large walkup crowd nearly doubled the expected size of 1,500 attendees.

“This space is moving so fast — just in the past year,” he said. “You’re going to see a huge leap in terms of where this market is. This conference will reflect what’s happening.”

Erickson, speaking from an Alexa conference in Chattanooga, Tennessee, pointed to Amazon as a prime example of growth.

“As you’ve seen, Google has jumped in, in a big way. Samsung’s in the game now and so is Microsoft. This market is moving so fast and VOICE Summit in 2019 will reflect the growth of that market.”

And, while last year’s event went a long way in introducing voice technology and its many potential applications, Erickson said this year’s conference will make a point to demonstrate how voice technology already is having a major impact in many sectors.

All of this thrills Aaron Price.

The creator of Propelify, an annual tech event in Hoboken that draws 10,000 people, Price said the more tech leaders can see of New Jersey, the better. He has seen firsthand how these events serve as connectors that build the tech scene.

“Technology and entrepreneurial conferences are a critical leg of the multilegged stool that helps innovation thrive,” Price said. “In uniting, educating and inspiring innovators, technology conferences serve as a real place for business to happen and for relationships to be built.

“Beyond a catalyst to the domestic ecosystem, they shine a spotlight for those around the globe to recognize the host location as a focus of innovation. Propelify welcomes attendees from all 50 states and 13 countries, some of whom have relocated to New Jersey because attending helped them recognize the geographic benefit, talent and entrepreneurial ecosystem that the state provides.”

NJIT President Joel Bloom said the school is thrilled to be part of VOICE again.

“Newark has become a tech hub, and NJIT is one of the top polytechnic universities in the country,” he said. “So, there is no better location for a conference on what arguably is the hottest and most rapidly evolving technology today.”

Amazon will return as a diamond sponsor, one of more than a dozen the conference already has lined up.

And Dave Isbitski, the creator of Amazon Alexa, will return as a keynote, too.

And since Erickson does not want cost to prohibit attendees, especially at the student level and those in underserved communities in the tech world, he’s finding ways for some to sidestep the $195 registration fee.

“This conference is very committed to inclusion,” he said. “We have set up a corporate sponsorship for scholarships at the conference to help align companies that are seeking to improve diversity and inclusion with an opportunity to sponsor recipients to the conference.

“We actually anticipate a thousand of our attendees will be scholarship attendees through our corporate sponsorship program.”

That would be another “W” for the tech community.

Experience matters: Why you should turn to your banker in times...