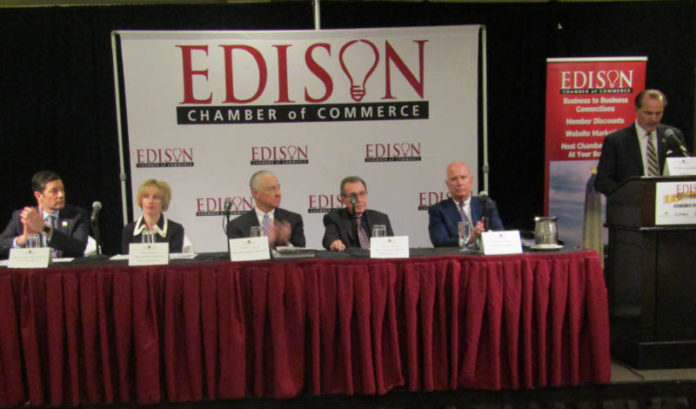 It was a call to action. Something needs to change, both locally and in Trenton.

“We need leaders that are truly going to do what’s best for us and what’s best for this state, because, right now, it’s not heading in a great direction,” said Walter Brasch, chief success officer at accounting firm Prager Metis.

That was, quite possibly, the biggest takeaway from the Edison Chamber of Commerce’s 2019 Economic Forum, held Tuesday at the Pines Manor in Edison.

“We are severely in debt in New Jersey,” Brasch said. “Our elected officials, in Trenton, (need to) wake up and fix this — and it’s the pension and the health system that’s causing this.”

Brasch said he has clients moving out of the state as a result.

“The Legislature (must) do something,” Brasch said. “If you’re under 38 years old, you’re not going to see your pension the way it’s going right now. One of the pensions, by 2023, is going to run out of cash. That’s when the Armageddon’s going to happen. You better call your Assembly (member) and your senator. We’ve got to put pressure on the Legislature to fix this, otherwise the outmigration is going to continue, because people don’t want to stay here anymore.”

Brasch brought to light a report by the Manhattan Institute for Policy Research — a conservative nonprofit think tank – that showed how the state should be contributing upwards of $6.7 billion to pensions rather than the $2.5 billion Gov. Phil Murphy says the state can afford. The payments, Brasch said, will grow to $8 billion in 2027.

It’s a system we can’t afford, he said, created over the last 40 years by past Legislatures and governors.

Grasso agreed with the criticism, and added some of his own.

“Job growth has been slow here in New Jersey,” he said. “We’re at about 5 percent job growth for the state. The national average is about 13 percent.”

The conversation shifted to talk about a potential $15 minimum wage, but went full circle to changes needing to occur within the state’s government, on all levels.

“Anytime the government mandates something, it hurts business,” Cummings said. “You could be hurting the lower end of the economy. They’ll be fewer jobs and fewer opportunities. A job at McDonald’s was part-time for someone in college. Those jobs aren’t expected to support a family of four. It’s incumbent upon our leaders in Trenton to promote better jobs for all people.”

Consolidating school districts quickly became a talking point as a potential solution to the tax and pension difficulties that the state burdens its residents with. Shared services, Brasch said, is a concept that’s been around for decades and used modestly.

“The biggest burden on our taxpayers is our school taxes,” Brasch said. “We’ve got to fix the school funding formula. Nothing’s being done. The governor says he’s going to address it, but you have to start forced consolidation.”

New Jersey can make itself affordable by not taxing everything, says Brasch.

A range of other topics were covered on the panel, moderated by Public Service Electric & Gas Senior Regional Public Affairs Manager Frank Lucchesi. They included New Jersey’s economy as a whole, tax policies in the state, trends in the housing market, demographics in the state and the effect they have on the economy, and why companies and millennials are leaving the state.

Even with their arsenal of critiques, the panelists still recognized some of the things that make the state a great one to do business in, including location, logistics, education and the demographics of the people that live here. But, for Cummings, it’s a matter of good government and good politics.

Cummings said we need a little more leadership because, if not, we’re a generation away from Germany, two generations away from France and three away from Greece — all countries that have experienced economic woes in recent years.

SHCCNJ gets $35K in grants for its Hispanic Entrepreneurship Training Program