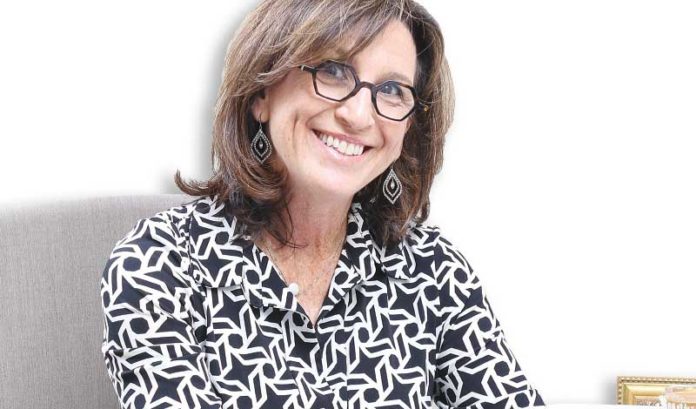 Tracy Fink asked the business professionals attending BioNJ’s Inspiring Women in STEM Conference in December to speak with a partner on what they love and are challenged by in their careers.

She then made an observation.

“When ‘listening,’ were you also ruminating about the past? Or worrying about the future?” Tracy asked. “What might it be like when we arrive more fully present?”

Fink asked the participants to turn off their cell phones, relax their shoulders, close their eyes and fully feel the weight of their feet on the floor before guiding them through a seated meditation.

Then she asked them to try the exercise again.

“How often do we go into a conversation, distracted by what else we need to do, or how we are going to respond or how what the person is saying might relate to ourselves?” Fink said. “And what happens to the quality of our conversations, both at work and at home?

“Mindfulness is about being in the present moment without judgment.”

Fink, widely known and respected in her marketing role and as director of the Executive Women’s Forum at CohnReznick, recently left her more than 14-year career with the accounting firm to conduct similar workshops at organizations in hopes of creating more emotionally intelligent workplaces.

As founder and CEO of The Tortoise Institute in East Brunswick, Fink said she employs science-based practices, one-on-one coaching and leadership development techniques to increase businesses’ focus on the relationship between leadership and well-being.

But first, she had to learn to focus on her own.

“It was like I woke up to a much more expansive way of thinking,” Fink said.

Nearly two years ago, Fink said, she began feeling as though she was outgrowing her role at CohnReznick.

“I had trained our national marketing team to embrace and adopt the Executive Women’s Forum as a business development tool for their regions, and when you are training people to do your job, you run the risk of becoming (obsolete),” she said.

Fink said she was prepared to be let go — but that never happened.

“So, I decided to obtain a certification to teach emotional intelligence in organizations through the Search Inside Yourself Leadership Institute, a secular and science-based company developed at Google,” she said.

It was a decision that was years in the making, Fink said.

“I had this growing, nagging feeling of dissatisfaction,” Fink said. “I was getting older, my kids were getting older, and I looked around and said, ‘Now what? What next?’

“But, if you looked at my life, I had everything — a great career, a healthy family, a happy marriage. I wondered, what exactly is it, then, that is making me feel so empty?”

Fink said she was inspired by a high-powered attorney friend after realizing a change in her following a four-day meditation retreat.

“It wasn’t that she had lost her edge — she was still just as successful,” Fink said. “But there was a softening about her that made her more open to different ideas, opinions and relationships.”

After attending the same retreat and continuing her research into self-compassion, Fink said she came across the online certification program at Google.

The program would take nine months to complete, including a week in San Francisco and several in-person meetings throughout the year, Fink said, but CohnReznick was on board.

“We’ve seen examples over and over of how compassionate leadership shows up in constructive and thoughtful feedback,” Fink said. “So, I said, ‘I think the firm can benefit from this, and I will need an audience to practice with,’ and they were very supportive.”

Upon completing the program, Fink said she began speaking with and providing workshops for CohnReznick and its clients about how emotional intelligence can be applied to and be beneficial for leadership development.

“But I noticed that my firm was not jumping up and down with joy the way I thought they would,” she said.

However, people outside of the firm were reaching out to her regarding her social media posts on what she had learned.

“They’d say, ‘Can you speak with my leadership team?’ Or, ‘We’re going through a transition; do you think this would help our employees?’” Fink said.

It was the catalyst for her to finally speak candidly with CohnReznick last June, she said.

“I said, ‘What are we doing here? I know CohnReznick is moving in another direction, and so am I,’” Fink said. “While it was really difficult to step out of my community and comfort zone, I knew it was the right thing to do for us both.

“I had felt very uncomfortable in my role for quite some time with my head and my heart out of alignment.”

Though she just incorporated in October of last year, Fink already has worked with large clients such as Perry Ellis International, a global branded clothing company; PNC Bank; and BioNJ, as well as a multitude of individual clients.

“What’s funny is that, when you have a name, a brand and a logo behind you, all of a sudden, what you’ve been doing for months suddenly becomes legit,” Fink said.

The work is often slow and difficult, Fink said, but incredibly rewarding, as it can lead to greater effectiveness and happiness within leaders and their organizations.

Fink books her one-on-one clients based on four-session commitments, with the first session being free.

“I need to ensure there is a mutual connection, as well as trust, understanding and respect for the process,” she said.

“I encourage people to move from autopilot to awareness to then notice things they may not have otherwise, including other people,” she said. “Just think, instead of being on one’s phone, scrolling through distracted nonsense, how many opportunities might one have to practice and develop such traits?”

Fink said she often begins by asking her clients to notice where they feel anxiety and tension in their body.

“Sometimes we don’t even realize we are holding our breath, especially when we are stressed,” she said. “If one is triggered, paying attention to where they feel that emotion in their body will help to activate a different part in their brain that will allow them to better explore and control their reactions.”

When we actively notice what we are thinking, feeling and experiencing, Fink said, the creation of new neuropathways can then help to create new and more positive habits, like acceptance.

But now that scientific evidence supports the fact that we actively can change the way we think, the workforce is catching up to Fink’s way of thinking.

“People often want to do business with those that they feel most connected to in authentic and transparent ways,” she said. “We just have to learn to pay better attention.”

Pushing parks: Why Baraka is thrilled with Newark’s big rise on...