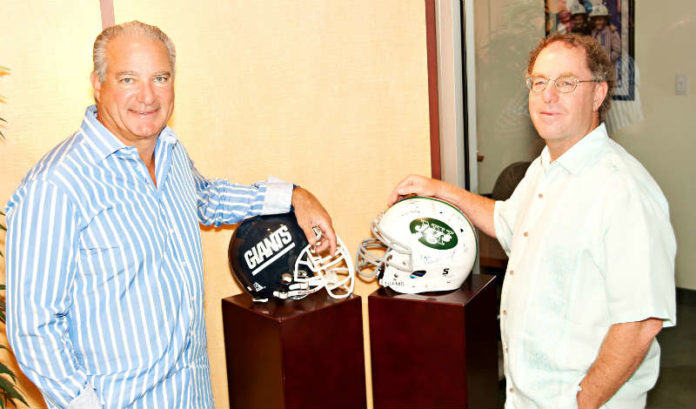 They fight for two things: their clients and their families.

Vuono and Rosner are partners together at 16W Marketing, a sports marketing agency based in Rutherford. The two formed 16W together in 2000 after working for several years at their company, Integrated Sports International, and with SFX Entertainment after they were bought out in 1999.

Rosner was born and raised in Bayonne and Vuono in Lyndhurst. They haven’t left the state since.

They’ve sat together at 26 of the last 30 Super Bowls, represented the likes of living legends Steve Young and Lawrence Taylor and Olympians Dan Jansen and Janet Evans.

ROI-NJ sat down with Vuono and Rosner to talk about 16W and the days leading up to the “Big Game.”

ROI-NJ: Can you talk a bit about your business and what it is you guys do here at 16W?

Steve Rosner: We have our talent group where we manage the careers of, at this point, mostly broadcasters but a couple active players as well. We manage their careers as far as their broadcasting and endorsements are concerned. Most of our clients have been with us a good amount of time. Boomer Esiason and Howie Long for 25 years, Phil Simms close to 20 years and Cris Collinsworth for 17 or 18. They’re basically a part of our family. Soup to nuts, anything that they need, we’re there for them.

Frank Vuono: On the corporate side, sometimes we’re representing the corporations and their interests, helping them get a return on investment, and other times we’re representing teams or the leagues or the organizing bodies who are trying to sell sponsorship on their revenue side. We’ve advised both the buying and selling sides, and we’re currently still doing that.

ROI: What sets you guys apart?

SR: We’re always looking for and using new media platforms for our clients to create content and generate revenue.

ROI: Speaking of generating revenue, you guys were running a much larger company, Integrated Sports International, while transitioning operations to 16W. Can you talk a bit about that process?

SR: In 2000, when Frank and I decided to buy this building — a small building so we can’t grow and build it again — we decided to continue to work with some of our longtime clients that have been with us thru the ISI/SFX days, to add a couple more and then stop. We wanted to enjoy life by creating a family atmosphere with our clients, but, at the same time, we were both growing our own families. And I don’t think either of us ever missed a sporting event or a recital for one of our kids. That’s part of what we’re about, especially at this point in our careers. Being prevalent in the industry while also making sure this business isn’t the only thing we have in our lives.

FV: With 66 employees, we had a much larger operation at ISI, and when we joined forces with SFX Entertainment, we were looking at it as an opportunity to play on a much bigger platform. We quickly realized people didn’t want to take on the risk and potential debt. The dreams we had to play on the bigger platform wasn’t going to happen. We maneuvered to gracefully leave there and, when we did, Steve and I decided we wanted to keep things on a much smaller, personal scale. In fact, moving into this building (in Rutherford), we did on purpose because we definitely didn’t want that much room to expand. We didn’t want to take on more personnel and overhead. We’ve said more “nos” to clients than “yesses” in terms of representing people, entities and organizations, because we do really want to keep it personal.

ROI: Keeping it personal probably means you must rely more heavily on certain people and times of the year. How much of your business is done during Super Bowl season?

SR: It’s only one week, so it wouldn’t be a large percentage of our overall business. As of this morning, and it’s two weeks before the Super Bowl, the number is 56 appearances we have to date that we have on the books that our guys are making, either our direct clients or we’re hired by third parties to secure talent for all their events. There’s 56 as of today and my guess is, by game time, there will be upwards of 80 to 85. That means our guys, or guys that we’ve put, are making appearances either on retainer with a corporation, or as one-offs — meaning they don’t have a contract, but are doing a chalk-talk or signing autographs. The first appearances start the Sunday before the Super Bowl and go until right before kickoff.

FV: It’s just an extension of what we do all year long. But, we kick off the week with our own invitational party. It’s become a major event. A lot of the top industry folks, including all our clients, attend. It’s a who’s who in the business, from the networks to the leagues to corporations. But this year, especially, will be busy with the Super Bowl in Atlanta, because there are certain people based in Atlanta I’ve done business with over the years. This’ll probably be my busiest Super Bowl in quite a while.

ROI: With Super Bowl season already a busy time of year for you guys, and with this one quite possibly being your busiest, I can only imagine. Most of your clients are also affiliated, in one way or another, with the NFL — which I can only guess is the reason why it’s such a busy time of year. Was it by design to maintain a football-heavy roster?

SR: You go to your strengths, right? Frank comes from a football background, and early in my playing career is a football background. It came with osmosis. But we’ve represented other types of athletes, especially from our days at ISI — (basketball star) Clyde Drexler, Dan Jansen, Janet Evans, baseball players and golfers. (Former New York Mets pitcher, now baseball broadcaster) Ron Darling is still a client of ours. Yes, we are football top-heavy, but that’s by choice. What we do and the way we do it could be for any talent.

ROI: Speaking of what you do and how you do it, sports management has become an increasingly popular field of study in higher education. What sort of advice would you give to those students who want to break into the business?

SR: Someone will come in for an interview, and the first thing they will say, and this is textbook, is the following: “I’ve been a sports fan all my life and I know I’m going to be good at this.” And I say, very simply, “That’ll be great. When I need somebody to tell me about my fantasy football team, I’ll give you a call.” Because, if you can’t put the business acumen that goes with this world of sports ahead, then you’re up against it. You’ve got to combine your love for the sport with the business portion. One doesn’t survive without the other.

ROI: Those hours must be quite an adjustment when you first get into the business. When did you guys know this is what you wanted to do for the rest of your life?

FV: I think Steve came into it much more deliberately, because it was part of his plan, ultimately. He made the decision to go into sports from the get-go when he got out of school. I was quite different. I was in advertising at Young & Rubicam out of college and, by chance, I was able to get a job at the NFL through a mutual connection. If that chance hadn’t come along, who knows? I could still be in advertising.

Spreading the word: Biggest challenge for nonprofits often is explaining their...