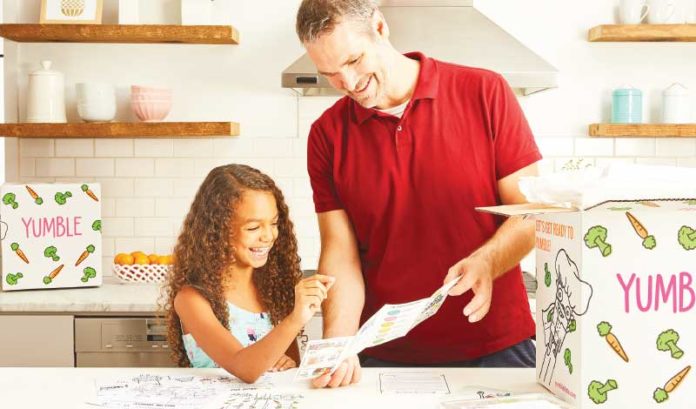 As a mother of three, Joanna Parker said she constantly was challenged to find the time — and the right ingredients — to cook healthy meals for her children.

She did not face this battle alone, she added.

“I always heard from other parents that it was a daily struggle to get well-balanced meals in front of their kids,” Parker said.

Now, nearly three years later, Yumble is positioned to become one of the fastest growing and most successful meal delivery services available for kids.

“The business is certainly evolving, but it all has been very exciting,” Parker said.

After working as a product assistant at Macy’s and a schoolteacher, Parker became a stay-at-home mother following the birth of her second child — and she said she still found it frustrating to put healthy food in front of her kids every day.

“I could only imagine how much harder it would have been if I also was still juggling a full-time job,” she said.

Parker said she was curious to learn if others felt the same.

“I posted anonymously on a Facebook Mommy group outside of my neighborhood and circle of friends to see if anyone might like me to cook their kids a week’s worth of meals,” Parker said.

Parker said she immediately was inundated with requests.

“These parents did not even know who I was, where I was or what I was cooking,” she said. “That’s when it became very clear to me that mealtime stress was a very real problem for parents everywhere.”

Parker, who learned to cook from her own mother, said she put together a menu — and a wait list — for just 15 customers back in 2015.

“I would cook and deliver everything to these customers, who would then ask again for the service next week,” she said.

As the wait list grew and Parker began searching for a more business-minded partner, her husband, David Parker, saw value in leaving his work in technology startups and film in 2016 to help solve this reoccurring pain point for parents.

“He saw the traction right away,” Parker said, becoming co-founder and CEO.

Together, Joanna and David Parker created a website at which customers could order their food online.

“But, when it became too much for us to handle, we brought on Dan Treiman, co-founder of HelloFresh, to be our chief operating officer, and began slowly building out the Yumble team in June 2017,” Parker said.

Yumble now offers free delivery to 27 states east of the Mississippi and plans to deliver nationwide by the end of this year, Parker said.

“We try to keep all of our meals well-balanced,” Parker said. “No child is going to have a perfectly healthy meal every time they sit down to eat, so we instead like to think about their daily or weekly diets, offering a variety of meals with a variety of different nutritional values.

“We also keep on top of the nutritional standards for children, making sure we always are reaching the highest thresholds for what it is kids need.”

Subscribers can choose from a constantly evolving menu of 22 different meals each week, including gluten-, egg-, dairy- and meat-free options, such as antibiotic- and hormone-free chicken nuggets with basmati rice and honey-glazed carrots, soy-free mac and cheese with sweet potato and cauliflower tots, and veggie pizza with edamame and ranch dip.

Though Parker creates all the recipes, she said Yumble will be bringing on a nutritionist this year to help guide the menu moving forward.

“We also choose organic ingredients over nonorganic whenever we can,” she said.

“Most parents think of mealtime as stressful, usually coupled with dramatic tantrums, so we’re trying to turn that around,” she said.

The Yumble Welcome Pack includes crayons, coloring sheets and a star chart for children to track their weekly meals. Children will then receive collectible coins in each subsequent delivery to be traded in later for prizes, such as board and card games and Legos.

“We recommend that parents hold on to the coins to then give to their children as rewards for eating healthy,” Parker said.

With more than 70 percent of customers ordering again after their first delivery, Yumble currently is growing 30 percent month-over-month.

In fact, on a recent episode of ABC’s “Shark Tank,” the Parkers disclosed they already have a few thousand active customers and more than $1.3 million in revenue.

“We struck a deal with Bethenny Frankel for 6 percent equity in the company for a $500,000 investment, and she even offered to be a spokesperson,” Parker said.

Though their offices are now based in New York City, the Parkers have kept both their commercial kitchen and their packing and shipping facilities near Edison.

“When we needed to hire more people, it was simply easier to find the talent in New York,” Parker said.

Out of 20 employees, she and David Parker are now the only ones who commute in, Parker said.

“But those in New Jersey are still my go-to customers when I have surveys or questions,” Parker said. “I sometimes will even go to their homes and deliver their meals myself in order to speak with them.

“Having a local contingency of customers has been very beneficial in shaping and developing the business from the customer’s perspective.”

Parker said her goal is for Yumble to become completely synonymous with healthy kids’ food, especially in the direct-to-consumer market.

“We really want to be the parents’ go-to trusted brand for all healthy foods, snacks and beverages,” Parker said.

After all, Yumble started with the idea of doing two things at once, she added.

“We wanted to make parents’ lives easier due to just how much they have on their plates right now,” Parker said. “And, my mission is to help kids develop healthy eating habits early on, because the younger they do, the healthier they will be when they grow up.”

Joanna and David Parker are parents to an 8-year-old son and two daughters, 6 and 4.

“Our kids have gotten used to us running a business together,” Joanna Parker, co-founder of Yumble, said. “They know that David and I go into the city and come home late a lot, but they also have fun.”

Her kids are her taste tasters for new recipes, after all, and they also love opening the boxes and completing the activities, Parker said.

“I really learn a lot from them by watching how they engage with the products, so, at this point, it is very difficult to separate work and family,” she said.

In just a few weeks, Yumble will become the first in the meal delivery industry to switch its packaging over to one that is fully recyclable, Joanna Parker, co-founder of Yumble, said.

“We will have the greenest packaging out there, which we’re very excited about,” Parker said. “Not only will our business be better for the environment, but, also, that has been a huge concern for customers in this industry, considering how much waste there is with a lot of other meal delivery companies.”