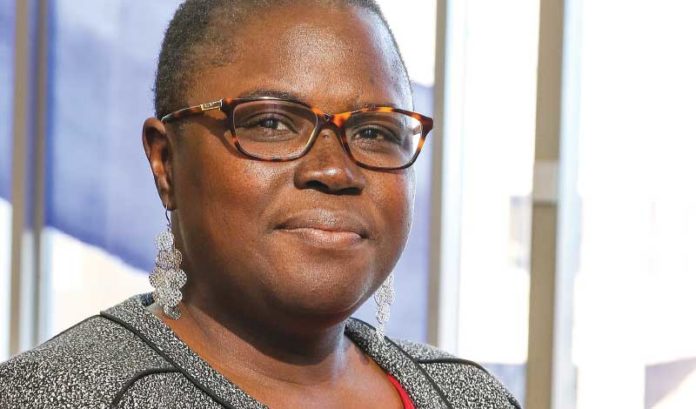 When she was promoted to co-dean for the law program on Rutgers University’s Camden campus, Kimberly Mutcherson represented a trifecta of firsts for the school: Never had it had a woman, African-American or LGBT individual in this top role.

But, if she’s being honest, Mutcherson said she would rather not have come first in so many regards.

And with the vision she has for the school, she more than expects she won’t be the last — the last person of color, the last woman or last LGBT individual who gets to sit in the office she’s now in.

Mutcherson, an expert on bioethics and other legal areas, truly has a progressive future in mind for this key institution in New Jersey’s law sector as she works with David Lopez, co-dean of Rutgers’ Newark campus.

She recently spoke with ROI-NJ about herself and her new role.

ROI-NJ: To get a better sense of what brought you here, could you talk a bit about your background?

Kimberly Mutcherson: I was one of those people who knew very early on that they wanted to be a lawyer. I was about 10 years old when I decided on that. I went to law school with the intention of being a public interest lawyer. When I graduated, I worked at a little-known nonprofit in Manhattan called HIV Law Project for a couple years. After that, I got a job at NYU School of Law and somehow ended up being a legal academic — not the path I thought I’d be on. I came to Rutgers-Camden as an assistant professor in 2002 and I’ve been on the faculty here ever since.

ROI: What drove you at such a young age to this profession? And what inspired you to take up the particular nonprofit work you did early in your career?

KM: I had a lawyer in my family. My mom’s sister, who lived close to us when I was a kid, was a lawyer and then became a judge on the Superior Court in Washington, D.C. She was one of the very few black women at the time who had that role. That was a piece of why I chose this as a career. I also felt like lawyers were people who could do good things in the world, and I wanted to be a person who could do good things in the world, as well.

I mostly envisioned myself as a civil rights lawyer. I thought I’d end up working at the NAACP or something like that. But, when I went to law school, I was lucky enough to work at a wide range of nonprofits, and I got to see different ways people were using the law to improve the world we live in. It ended up being that the place I felt comfortable was a smaller organization doing direct services work and policy work, and that’s what the HIV Law Project was.

ROI: When Rutgers announced your recent appointment to co-dean, it noted that you would be helping expand its focus on providing equal access to opportunity for students — could you talk more specifically about what that means?

KM: There are a few pieces to that. Before I had any administrative role here, one of the many things that I really pushed our dean to do was to expand our academic success programs. These are programs that push people who might have a background where higher education just wasn’t a part of their family’s experience. So, that transition to law school can be very difficult for folks. I felt very strongly that we weren’t providing the amount of support that we could to those students coming into the law school — ones without lawyers in their families or those kinds of experiences. That was years ago, and we’ve since been able to hire someone full-time to do our academic support, which is terrific.

Beyond that, I was lucky when I became the vice dean to participate in hiring adjuncts to expand the pool of people we were looking at. We brought people in that diversified that pool of people for us, which I think is important not only for them but for our students, who can see a wider range of people who are successful lawyers — women, people of color and people who are living with disabilities. We want to get past the vision that what a lawyer looks like is a set type of person.

Our profession has lots of different people in it. The people teaching in law schools should reflect that. We’re in this great space in which we’re seeing law school applications on the rise. It has been a while since we’ve been in that space. And so, we want to make sure that our doors stay open when we’re bringing in students for our program, many of whom are going to end up here in New Jersey.

ROI: What’s your assessment of the situation across the board in the state in terms of representation of minorities and women in the legal sector?

KM: One of the things that’s great about New Jersey is that there are really strong affinity bar associations. There are ones out there for Latino lawyers, for Asian and Pacific Islander lawyers, for African-American lawyers.

There are great organizations offering opportunities for mentoring and other support for younger lawyers and people in law school. That’s a nice thing about the state, but, unfortunately, we know that, in general, the profession has not been as welcoming to folks outside what’s considered the mainstream of who lawyers are and those who might not have had the same opportunities afforded to them. Even though about 50 percent of people going to law school now are women, if you look at the people who are partners at major law firms in New Jersey, 50 percent of them definitely aren’t women.

So, we’re still seeing a lot of firsts at firms — and some firms haven’t even had them yet. There’s still a lot of work to be done. And I think part of that is that people need to be able to see themselves represented in these spaces in order to feel like they can be there and be successful and rise in the ranks.

ROI: Going back to that role model at a young age: Are you going into this position with the hope — especially as the first woman, the first African-American and the first LGBT law dean at Rutgers — to similarly inspire the next generation of lawyers?

KM: I would hope so. I think about the people who I looked up to when I was in law school and how formative those relationships were — I think of two professors in particular. I think it’s very important for people to see people (who look like) themselves, to see someone who has their commitment and is in leadership. It allows people to imagine themselves differently than they might otherwise. So, I’m excited about that. But there’s certainly the part of me that wishes this had happened before 2019 — that I wasn’t the first.

In any case, I’m glad to be here now. And my expectation is that I’m not going to be the last person — the last person of color, the last woman or last LGBTQ person — who gets to sit in this office and do this work.