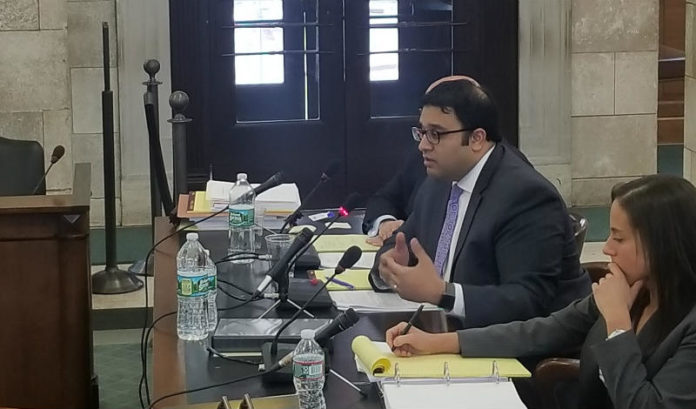 There is no one-size-fits-all equal employment opportunity policy in the private sector, nor is there a uniform policy for all state agencies.

This and other issues have been uncovered in the ongoing hearings in Trenton by a joint legislative committee that is looking into accusations of sexual assault against a former member of Gov. Phil Murphy’s transition team.

Rajiv Parikh, a lawyer at Genova Burns who served as the chief counsel for Murphy’s transition team in 2017, was the only person testifying Friday at the sixth hearing of the committee.

He emphasized the point about the EEO policies, and shared some insight into how the state views transition team operations and funding.

The hearing focused on the ongoing questions surrounding the hiring of Al Alvarez, accused of sexual assault by current New Jersey Housing and Mortgage Financing Agency chief of staff Katie Brennan. Alvarez has now twice been cleared by two separate county prosecutor’s offices in the past 13 months.

Parikh said that, in his role as counsel, he had no way of knowing how Alvarez was hired by the transition team, even though he played a role in conducting public records searches of potential hires.

Alvarez eventually became chief of staff in the Schools Development Authority, but resigned last October, prior to the publishing of a story in the Wall Street Journal detailing the alleged assault.

The case is one of interest for lawyers and businesses, as the human resources issue that has played out in offices around the state is being viewed through the lens of the political sphere, where there appear to be fewer protections, based on Parikh’s testimony Friday.

In an eight-page opening statement, Parikh suggested policies and laws that could prevent the Alvarez-Brennan conflict from being repeated in the future.

The cost of running the transition team has also been brought up in previous testimony, and, in fact, many of the paid transition members were paid by the state Democratic Committee, rather than by the pool of money provided by the state.

This, according to Parikh, played a role in the limited ability to screen applicants that were passed on to state agencies as potential hires.

The most thorough checks were done on the cabinet members, Parikh said, and those are costly background checks done by the New Jersey State Police.

In his testimony, Parikh also highlighted that transition employees, though paid by state money, aren’t covered by equal opportunity laws and policies.

State Sen. Loretta Weinberg (D-Teaneck) was surprised by that point, and said it was an important one to bring up.

“What about the part of the EEO policy that says this policy covers any applicants for positions in the state government or anyone doing business with the state of New Jersey?” Weinberg asked.

Parikh said that the policy does not cover anything more than the application process — ensuring that an applicant receives fair treatment in their pursuit of a job, but nothing beyond that. And the law governing transition committees specifically says that transition employees are not state employees, so any protections afforded to state employees does not apply.

The only state laws that apply to transition team members are rules regarding participating in the retirement system and conflict-of-interest laws, Parikh said.

“The state EEO policy does not apply to transition staff,” he said. “Usually, statute trumps policy, because it is the law.”

But Parikh also emphasized that he is not an employment lawyer and cannot opine in depth on the topic.

Why businesses should expect more closures, stay-at-home orders — and to...