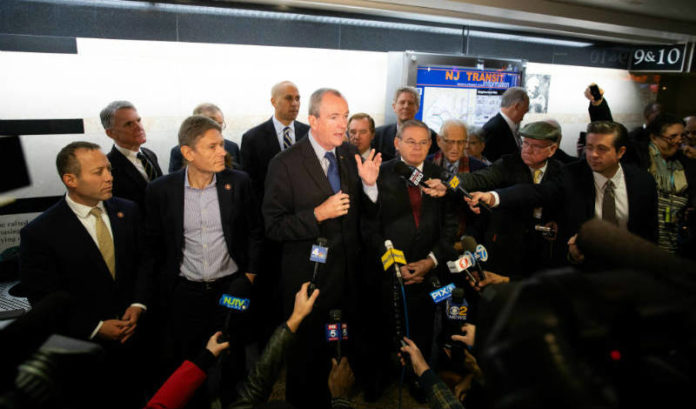 It was just after he entered the tunnel that connects New Jersey and New York under the Hudson River in an Amtrak theater car — a specialty car fitted with huge windows and floodlights — that U.S. Rep. Josh Gottheimer said he fully realized just how desperate the situation is.

“When you first got in the tunnel, when we slowed down and they actually put these bright lights, these spotlights, onto the cracks and crevices, and you could see the actual damage, that’s when I threw my video on and said, ‘Everyone’s got to see this,’” Gottheimer (D-N.J.) told ROI-NJ.

(See a clip from Gottheimer’s video below.)

“It just really makes the case better than any article or an explanation.”

Gottheimer, who represents the state’s 5th District in the House, was one of approximately two dozen elected officials and transportation leaders to take the ride through the tunnel in an effort to see just how much the tunnel walls are crumbling.

“When you see this up close, you realize just how risky the situation that we are facing is and how dire the situation is,” he said. “We were just kind of talking to ourselves, saying, ‘I can’t believe people are playing political games with this project right now versus greenlighting this immediately.’

“There’s no way that any official from anywhere who got in that train to see what we just saw would ever do anything except say, ‘OK, how do we start this? How do we get this thing going tomorrow?’”

The Gateway Tunnel project has begun. But, until it gets a massive commitment from the federal government — estimates range anywhere from $15 billion to $35 billion — it will not get to the most meaningful stages.

That’s why Zaro, member at Sills Cummis & Gross P.C. and chairman of the GDC, put this sightseeing tour together, at the urging of Murphy.

“It’s the old adage: A picture’s worth a thousand words,” he told ROI-NJ. “That’s what we accomplished today. I’m quite sure of it.”

Of course, convincing New Jersey of the need for the tunnel has never been the issue. Convincing the federal government to appropriate the funding has been.

Gottheimer said the failure to do so came through Monday.

“It’s very frustrating,” he said. “I think you’ve got a lot of frustration on that train of folks who have just felt like we keep having the same conversation, but we haven’t been able to move the ball.

He said he is grateful for Murphy’s support — which came along with $600 million from the state — and said he is confident the area’s leaders in Congress will be able to put more pressure on President Donald Trump’s administration.

“The table has been reset in the November election,” Zaro said. “The House now is in Democratic control. The Appropriations Committee is now chaired by Nita Lowey of New York and (New Jersey’s) Frank Pallone is chair of the Energy and Commerce Committee.

“It’s going to be very hard for people from other areas in the country to get bills through Congress until they recognize and do the right thing by this region.”

Gottheimer said it’s time for straight talk. It’s what he said he has learned since he helped found the bipartisan Problem Solvers Caucus.

“You’ve got to keep talking,” he said. “You actually have to engage.

“The one thing you don’t do is go to your respective corners and refuse to talk. Anybody who’s ever negotiated any progress on any issue knows you have to sit at the table.

“What I’ve learned with the Problem Solvers is that it’s talking to and actually listening to the other side, so you can understand where their perspective is. Doing that can actually help you find out where you can actually agree.”

Then again, there were those cracks.

Gottheimer was quick to agree those images were, in fact, worth a thousand words of discussion.

“Actually seeing it up close has a very powerful effect,” he said. “Getting to see the damage at that level and have it explained to you from an engineering perspective of what’s going on just reinforces the case at a level that I think is critical.

“I’ve been talking about this for a long time, but seeing it at this level is different. I’ve seen the Portal Bridge, because you can pass it, but actually having someone take you through every crack in the tunnel and see them up close is a very powerful moment and an important moment.”

Zaro just wishes everyone could see the damage.

“This tunnel is underwater, literally and figuratively,” he said. “If we could pull it out of the water and span it across the Hudson and everyone could see it, the outcry to replace it would be deafening.