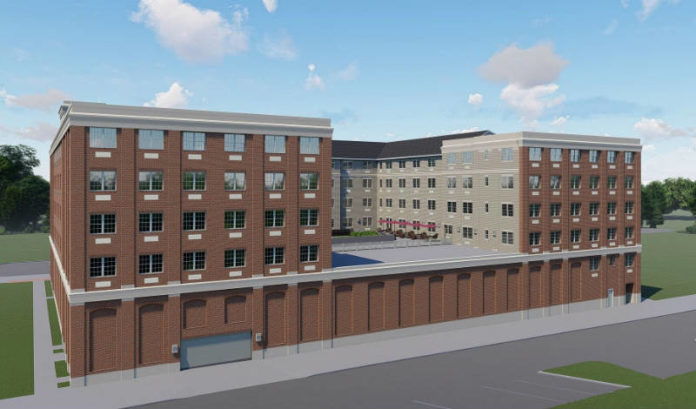 Circle Squared Alternative Investments and an affiliate of The PRC Group of Companies will build the Class A property, which will include 144 units of upscale, market-rate housing and related amenities. The project is a collaboration between the city, NJCU and the developers.

“We have been a part of the redevelopment of the West Side of Jersey City for some time now, and, thus far, tremendous progress has been made, with even more transformative development on the horizon,” Morristown-based Circle Squared’s founder and president, Jeffrey Sica, said in a prepared statement. “The PRC Group is a 60-year-old amalgamation of companies with an exceptional track record as a construction manager and developer.

“We couldn’t have found a better partner for this stage of the University Place project.”

The project represents the second apartment building to break ground at the University Place master-planned community, which will eventually include four such buildings, plus graduate student housing, a performing arts center and a shopping center.

“This is an exciting and transformative project for us,” Robert M. Kaye, West Long Branch-based PRC Group’s founder, chairman and CEO, said in a statement. “The apartments in this complex will offer many of the same amenities as the luxury building on the waterfront, along with excellent access to public transportation, but at a much more accessible price point.”

Food & Hospitality
ROI-NJ Staff -
November 25, 2020
How’s this for giving back: Newark Working Kitchens — a program created during the time of COVID to deliver nutritious meals created by Newark...

Food & Hospitality
ROI-NJ Staff -
November 25, 2020
What happens when the creator of the first cannabis-based ETF joins forces with a celebrity cannabis chef for the holidays? You get some really...

Fine time for wine? If that’s how you feel, this group has you covered

Food & Hospitality
ROI-NJ Staff -
November 25, 2020
For many, the holiday season means holiday wine. The Garden State Wine Growers Association sure hopes many feel that way. It is kicking off its...

Health Care
ROI-NJ Staff -
November 25, 2020
While New Jerseyans debate how they will celebrate a COVID-impacted holiday season, there is one aspect of the holidays we should all be able...

Giving thanks to health care workers on this unique Thanksgiving Day

Op-Ed
Kevin O’Dowd and Anthony Mazzarelli, Cooper University Health Care -
November 25, 2020
To say 2020 has been a challenging year would be quite an understatement.  However, difficult times present an opportunity for us to focus on...

Ron Ladell is on sabbatical. Seriously