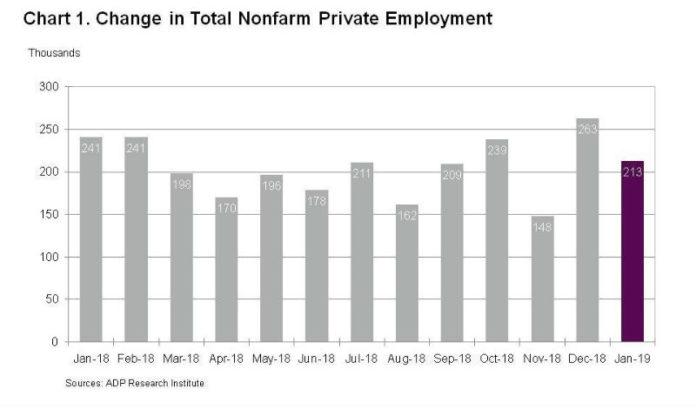 Private-sector employment is up by about 215,000 jobs this month, according to Roseland-based ADP.

The payroll and human services company said in its monthly ADP National Employment Report that the number of jobs grew by 213,000 positions between December and January.

“The labor market has continued its pattern of strong growth with little sign of a slowdown in sight,” Ahu Yildirmaz, vice president and co-head of the ADP Research Institute, said. “We saw significant growth in nearly all industries, with manufacturing adding the most jobs in more than four years. Midsized businesses continue to lead job creation, however the share of jobs was spread a bit more evenly across all company sizes this month.”

“The job market weathered the government shutdown well. Despite the severe disruptions, businesses continued to add aggressively to their payrolls. As long as businesses hire strongly the economic expansion will continue on,” Mark Zandi, chief economist of Moody’s Analytics, said.

Under the goods-producing sector, construction brought in the most jobs, reporting 35,000 new roles, while manufacturing added 33,000. The only industry at a negative was natural resources and mining, which lost 1,000 jobs.