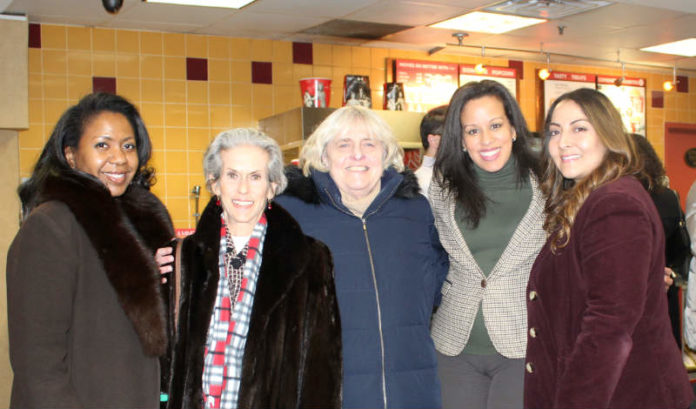 “An Acceptable Loss” is a women-led film from start to finish.

The investors are women, the executive producer is a woman, all the lead roles are women and half of the extras are women.

“It reflects the challenge for women in leadership in all fields,” she said.

EWNJ, in partnership with the Hispanic Bar Association of New Jersey and the Women’s Association of NJPAC, held a private screening of the film Wednesday night at the Bow Tie Claridge Theater in Montclair.

“An Acceptable Loss” is a political thriller about a former national security adviser who sets out to tell the truth after a controversial military action that was supposed to end the war on terror actually causes thousands to die under false pretenses. It debuted in theaters Jan. 18.

Michellene Davis, an executive vice president and the chief corporate affairs officer at RWJBarnabas Health as well as past president of EWNJ, who was an investor in the film, said the makeup of the cast — which includes Tika Sumpter and Jamie Lee Curtis — mattered.

“I was an investor because I believe representation matters,” Davis told ROI-NJ. “I think (“An Acceptable Loss”) will reveal the fact that women are significant decision-makers in matters that have great impact on the world around us, and the fact that they should be.”

Davis said these women are not playing characters just waiting for the romantic lead to come and sweep them off their feet, but, rather, they are complex creatures.

“These leading women are not weeping women,” Davis said. “We’re providing an opportunity for women who occupy powerful seats in the corporate world to see themselves on screen. We don’t really see ourselves when we’re watching ‘Princess Diaries’ or ‘Runaway Bride.’”

Davis said it’s important to see women in these roles to show that we exist in these spaces, especially for future women who may want to follow suit.

“We wanted to look at the political scene,” she said. “Rumsfeld wouldn’t have changed a thing and McNamara had second thoughts. We decided to flip the script and have women play these roles.

“I think it reflects what happens in politics, and we decided to have women in the script.”

Straight says it’s extremely important for women-led films to receive the attention and funding needed for their creation because, she said, unless you see women in front and behind the camera, movies like this will not be created.

Following the screening, Straight stayed to answer questions from the audience.

EWNJ is eager to keep the discussion of women in the workplace going.

EWNJ publishes a biennial report, “A Seat at the Table.” Kaufman said its next report, that’s to be published in October, will talk about the status of women on the boards of New Jersey’s public companies. The report, she said, recognizes companies that have three or more women on their boards. Its last report, published in 2017, showed 22 of 95 companies had three women or more on the board.

“What we represent as an organization is that things won’t change unless we take measures to make sure that change occurs,” Kauffman said.