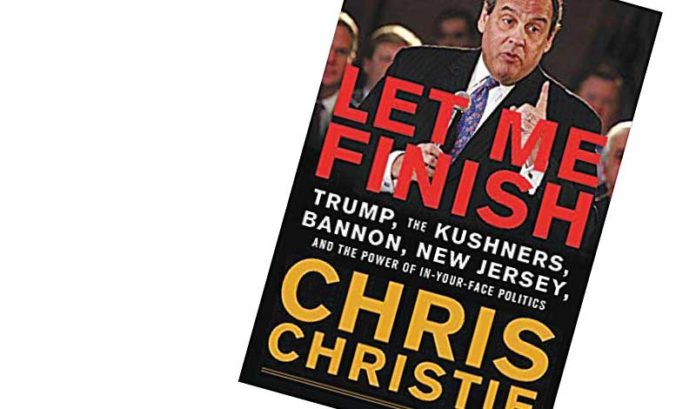 The answer to all three — after talking with many people who interacted with him and his administration — was D) None of the above.

“I haven’t read the book and I don’t plan to,” came back repeatedly.

For the few people (read: fellow media) who have (accurately) found (many) passages that appear to stray from the public record, the view appears to be that it is simply another book from another politician who gets to look back at his time in office. That means it comes with his own positive perspective and allows one last opportunity to take a negative swipe at his opponents (whether it be the Kushners, Steve Bannon, the media) while trying to adjust his legacy (see: Bridgegate).

In other words, it’s just another book from a politician, one that will soon end up at bargain-bin bookstores after failing to resonate on Amazon and making only a brief stop at Costco and Target.

That doesn’t mean it is inconsequential.

So said Bill Palatucci, one of the architects of Christie’s political career, who remains a supporter.

“This is one of the very few books from a person with high level and direct contact with candidate (Donald) Trump and President Trump,” he told ROI-NJ.

“The book is vintage Chris Christie,” he said. “He’s got something to say and he’s going to say it clear and emphatically. — Bill Palatucci

“I think it’s very insightful (to hear) what happened when we were dismissed from the transition from Chris, who continued to be a frequent visitor to the White House. These are his observations about why things were and were not working (in the Trump White House). I think that it’s good for the country to hear that person’s perspective.”

Readers and viewers ultimately will answer that question. And, while Christie has the resume to speak (federal prosecutor, two-term governor, chairman of the Republican Governors Association, presidential transition leader), the simple truth is that everyone in this state made up their mind about Christie years ago.

It’s why there’s little buzz about the book.

And could be one of the reasons Palatucci does not think the book will have any impact on any future races Christie may enter (and Palatucci in no way suggested he is going to) or on Christie’s personal brand. If anything, Palatucci said, it just reinforces it.

“The book is vintage Chris Christie,” he said. “He’s got something to say and he’s going to say it clear and emphatically.

“Good for him. People can agree or disagree — and everybody will be right.”

Most importantly, Palatucci said he feels it will have no impact on the Republican Party in New Jersey.

“Everybody has to stand on their own two feet, pick up the mantle themselves and move forward,” he said.

“We had to build the party from scratch ourselves and got it all accomplished, and if that’s what others want to do, then they need to blaze their own path.”

The Christie book tour is just getting started. The guess here is that it soon will be winding down.

The governor — love him or loathe him — certainly was one of the most consequential in the state’s history in the past generation. Even his critics concede that.

And, like all politicians, he wanted an opportunity to get the last word.

Most people apparently feel he already had.

In search of PPE — and everything else a hospital needs