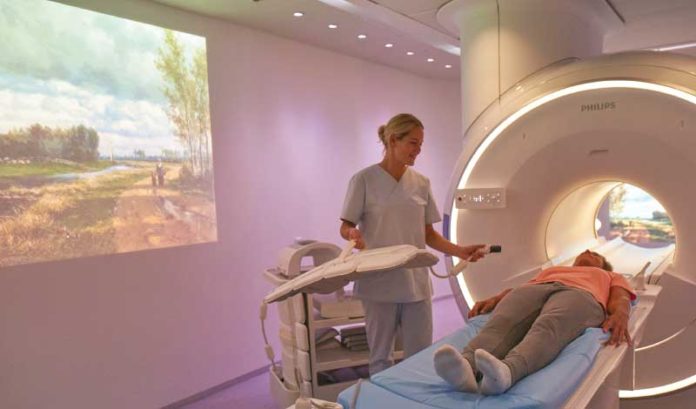 You know hospitals in the Garden State are really taking off in terms of technology when its leaders are drawing analogies to “Star Trek.”

Dr. Robert Lazarus, a radiologist at Inspira Health, chose a fictional device from that TV show to describe a new MRI technology soon coming to its facilities.

“You remember the holodeck from that show? You’d walk up to it, there was a plate on the wall, you’d program something in and then a door opened and you experienced whatever was programmed,” Lazarus said. “Maybe it’s not 25th century like it was on TV, but it’s moving in that direction.”

Using the Vineland-based nonprofit’s system, which it is purchasing from Philips Healthcare, patients can select from different aesthetic experiences on a panel outside MRI rooms and then have that virtual ambiance surround them once they are in the room.

“And, when you’re in there, it really does feel like you’ve been transported to some other place,” Lazarus said.

There’s a benefit outside of space age novelty, of course. Hospitals across the South Jersey health system, as well as hospitals outside Inspira, have long struggled with the traditional MRI experience.

It involves tucking into a dark space in a noisy room; it gets the job done, but it’s no fun.

It’s no wonder why patients report a lot of discomfort, according to Fred Gajewski, director of ambulatory imaging services at Inspira.

“Often times, it can be a really unpleasant experience for people,” Gajewski said. “The patient doesn’t feel well, sometimes even scared. They’re going inside a magnet, and they might be claustrophobic with a fear of enclosed spaces. This helps to ease patients’ concerns.”

With new technology now available to hospitals, gone is the menacing room. Patients can now, at least virtually, escape to a scenic mountain retreat or swim alongside sea turtles — with sounds and all.

It might not replace the spa, but the verdict is that it works well.

“I’ve spoken to other health care institutions who have this, and all the feedback has been really positive,” Gajewski said. “And customer satisfaction scores are something we really take pride in.”

Easing patient worries is one perk, but, as both Gajewski and Lazarus explained, when a hospital does an MRI, it needs the patients to stay relatively still, otherwise it won’t have clear enough images for physicians.

Keeping patients relaxed makes that requirement a little easier — and reduces the amount a hospital has to reschedule patients and have radiologists redo tests. Lazarus expects patients will be less apt to move around if they’re comfortable.

“And no one in this South Jersey area has this experience yet,” he said. “So, for us, we’re looking to differentiate ourselves from our competitors in offering this health care service.”

That might not be true for long. More health care institutions are going to catch wind of this and start to offer it, too, Lazarus said.

“I think in time it will become very widespread,” he said. “Philips Healthcare has really mastered this technology. And, over time, we’re going to see other vendors besides Philips slowly start offering this.”

The catch? It doesn’t come cheap.

Inspira is purchasing these new devices for local hospitals as well as another improved computer program that’s involved in MRIs from Philips Healthcare that will nearly halve the time it takes to do this scan. It adds up for a significant capital expense.

“It’s up to us to prove it’s going to work and that it’s a good value for your dollar,” Lazarus said. “You have to prove that patients love it and that they’re going to respond to it. Once you see that, everyone will want on the bandwagon.”

Lazarus is confident people will respond well to it.

“Because it’s not just for claustrophobic people — it’s for anyone who is used to going in a room and seeing a typical sterile environment,” Lazarus said. “Instead, they’re going to see something different, something pleasing, where they can come out and say, ‘Hey, that wasn’t so bad.’ That’s really what we’re excited about.”