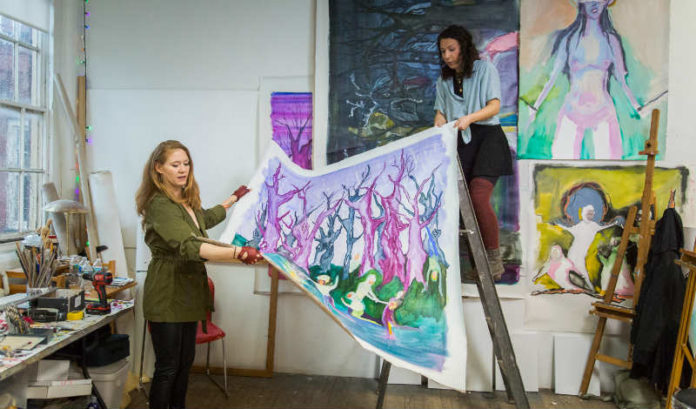 Kathryn Waggener McGuire said she moved into a “hotbed” of quality artistic work when she relocated from Brooklyn to Montclair with her family in 2013.

“As a collector and artist myself, I’ve gotten to know a lot of artists in town,” McGuire said. “But some of these artists’ amazing pieces are just sitting in garages and basements right now.”

Montclair, she said, was lacking a high-end art gallery, a space intended for “academic shows and scholarly perspectives.”

So, McGuire decided to open Clerestory Fine Art in Montclair to aid in her pursuit of making collecting art less intimidating and more accessible.

“To know I am helping launch someone’s career by connecting people in this area who would have no contact otherwise is extremely exciting,” McGuire, the space’s owner and director, said.

She has the chops and the knowhow to make such a feat happen.

While earning advanced degrees in studio art, art history, museum education and historical research from both Franklin & Marshall College and Columbia University, McGuire traveled the world, she said, living, working and studying in countries such as Bulgaria, Austria and Russia, before returning to New York City to accept a prestigious curatorial internship with the Metropolitan Museum of Art in 2005.

From there, McGuire gained professional experience with for-profit galleries such as Galerie St. Etienne in New York City and the Baron and Ellin Gordon Art Galleries in Norfolk, Virginia, before returning to the Metropolitan Museum of Art as an education associate within its exhibitions and communications department.

However, McGuire changed paths following the births of her three sons, to pursue smaller projects in and around her new town.

“I’ve always had my foot in the door, even after leaving work full-time,” she said.

For example, McGuire has directed programs for artists with Alzheimer’s and dementia at the Montclair Art Museum, created an incubator for emerging artists at Studio Montclair, and also founded the Montclair Figure Drawing Group in her home studio.

“That’s why people of well-established means often would come to me seeking advice on works they should buy, but were not sure where to start,” she said.

What motivates real collectors, McGuire said, is getting to know the artist.

“If you’re going to buy a piece for $30,000, you care about where it comes from,” she said. “Therefore, I wanted to be the bridge point between these collectors and those artists creating meaningful bodies of work I thought should be in museums and Artforum International Magazine.”

McGuire said she and her family sold an investment property to be able to properly renovate a 1,300-square-foot space on Church Street, with enough space to show two exhibitions at a time while also hosting educational workshops and panels.

Clerestory Fine Art is expected to open in March.

“Clerestory is the architectural term for the most elevated row of windows in a church, designed to let light in, and the name also is a play on our representation of local artists, as Montclair means ‘clear mountain’ in French,” McGuire said.

Clerestory Fine Art will sell pieces between $5,000 to $25,000, with the idea of also helping to train people how to effectively purchase art.

“It’s about properly building local collector-creator relationships,” McGuire said. “We’re not selling work intended to match your living room — we’re selling work that you want to learn about and have a deep connection with.

“Think about it. If you are going to pay $5,000 for a couch, you might want to consider paying $5,000 for a painting instead that will outlast you and you can hand down to your children.”

“People do not start out as collectors, but once you work your way up to it and discover what it is that you love, you know what you are then willing to invest in, instead of simply purchasing a piece of artwork that you think looks nice,” she said. “You then become both a patron and an advocate for that artist.”

One goal, McGuire said, is to have a collector with an artist’s work in their home be able to run into that artist at the grocery store.

The other is to lead a massive rebranding of Montclair as a cultural tourist destination for fine art.

“To do that, other galleries and local art organizations must work together to put Montclair on the map,” McGuire said.

For example, Studio Montclair is a nonprofit consortium for more than 400 artists producing smaller exhibits in conjunction with public buildings.

“The incubator program for emerging artists, for example, is in the Academy Square building, which houses small businesses and lawyers and such,” McGuire said. “But there are restrictions of the kinds of work they want exhibited in such buildings.”

And as for other for-profit galleries in the area, such as Gallery L, 73 See, and Gold/scopophilia, McGuire said, the work typically sells at a lower price point than what she intends at Clerestory Fine Art, or the intent is to showcase more so than entertain scholarly understanding or to exhibit pieces from all over the country.

“But I am working on creating a consortium of for-profit galleries in the area to talk about how we can better collaborate, create art walks and cross-publicize to help make Montclair into a visual arts-based tourist destination,” McGuire said. “I also would like to be able to point patrons in different directions if someone cannot afford what I am selling, to be able to challenge galleries in the city.

“I view Chelsea as my competition, not any of my neighbors — they are my colleagues in arms.”

McGuire said she also is happy to be exhibiting with other New Jersey-based arts organizations.

“A lot of people are unaware of Glass Roots in Newark, for example, despite their inspiring story and the way their teaching artists work with low-income students, so we’re planning an exhibition with them in the spring and speaking with collectors who are on their board,” she said. “And Art and Prozac is a group of three bartenders at Egan’s and Sons in Montclair, a poet, a visual artist and a performer, that put on these guerilla art pop-up shows with musicians and fine artists and photographers.

“These are the types of organizations I would like to highlight, to emphasize that there is all this hot blood that is starting to bubble to create these open, creative spaces in our area. I want to be able to connect collectors with these people who are starting to express themselves.”

Her overall goal, McGuire said, is to get works featured at Clerestory Fine Art into Artforum International Magazine within two years and to have her artists represented by museums within five.

“It’s exciting as an art historian to be able to catch something new,” McGuire said. “Everybody can research DaVinci, but I can be the one to write the narrative.”

ShopRite’s Kent takes over as chair of N.J. Food Council