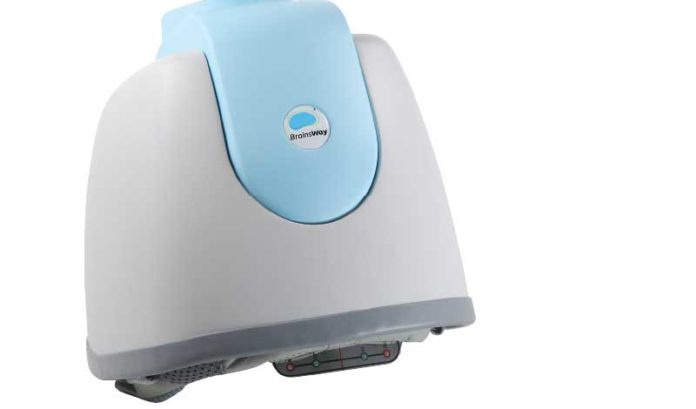 When you’ve got the first treatment cleared by the FDA for obsessive-compulsive disorder in almost a decade, word gets around.

That’s why the Hackensack office of Israeli biotechnology company BrainsWay recently got a barrage of phone calls — none seemingly from the same area code — when it got a first-ever clearance for a noninvasive medical device that treats OCD with deep transcranial magnetic stimulation.

The first questions: What is it? And how does it work?

Put simply, deep TMS is a device that uses magnetic fields to stimulate nerve cells in the brain. In this case, magnetic pulses are sent into the region of the brain known to be involved in OCD.

The device, a magnetic H-coil inside a padded helmet, is used for treatment in doctor’s offices. And it apparently comes without many side effects. According to the FDA, the most frequent side effect experienced by patients was a headache, but no serious adverse reactions were reported.

Joseph Perekupka, the company’s vice president of sales operations, said the technology, which already has been approved for use in the treatment of major depressive disorder, is generating a lot of interest from those suffering from OCD.

“But it’s not just potential patients excited about it,” he said. “Physicians and psychologists have been having the exact same discussions with patients about treatment options for almost 10 years. … There was a desperate need for something new.”

Importantly, he added, OCD is one of the most difficult diseases to treat in the mental health spectrum. It’s a long-lasting disorder in which a person has reoccurring thoughts and behaviors that prove difficult to control — the prototypical example being contamination anxieties and repeated hand-washing.

And Dr. Aron Tendler, chief medical officer at BrainsWay, said this is an unexpectedly prevalent disorder.

“Conservatively, 2.3 percent of the population will be diagnosed with this over their lifetime,” he said. “And it’s really a chronic disorder, with a waxing and waning aspect.

“OCD is also quite disabling and costly. We suspect it ranks 10th in causes of disability and fifth in a younger population.”

“The average age a person is diagnosed is 19,” Perekupka said. “And, in most cases, they’ve been treated for a decade on average for a potential mental illness before that diagnosis.”

There has long been only five medications and psychotherapy as options for OCD treatment. But up to half of patients don’t see adequate results from those existing treatments, according to Tendler.

For those who don’t respond to conventional treatment, BrainsWay’s device is now being marketed as an alternative. And the new treatment option started being introduced to outpatient centers around the country as part of what Perekupka referred to as a soft launch of the device.

“But the demand for it was so high that we had to expand it faster than we wanted to,” he said. “In the next phase of the rollout … we’re launching a larger patient awareness program.

“We broke it up that way, because the worst thing you can do is get patients excited about it before there is anywhere they can actually get the treatment. Right now, hopefully, there’s someplace relatively close where people can find it.”

The devices are dispersed across the country, with a small percentage staying in Garden State health care centers. A number of facilities in New Jersey also are utilizing the BrainsWay device marketed for depression treatment.

BrainsWay has a pipeline of trials underway with its H-coil devices. It’s evaluating how effective the technology will be in helping people cease cigarette smoking, as well as in the treatment of post-traumatic stress disorder and bipolar disorder.

In fact, the company’s system was one of only a few medical devices — and the only system of its sort — selected by the FDA out of more than 250 applications to participate in a program dedicated to finding tools to prevent and treat opioid abuse. The device is being tested for its potential to help prevent relapse after detox in addiction treatment.

“We’re proud to support research and development with consistent investment in these trials,” Tendler said. “We’re doing more in this space than anyone else. We really believe in this technology and want to expand the utilization of it.”