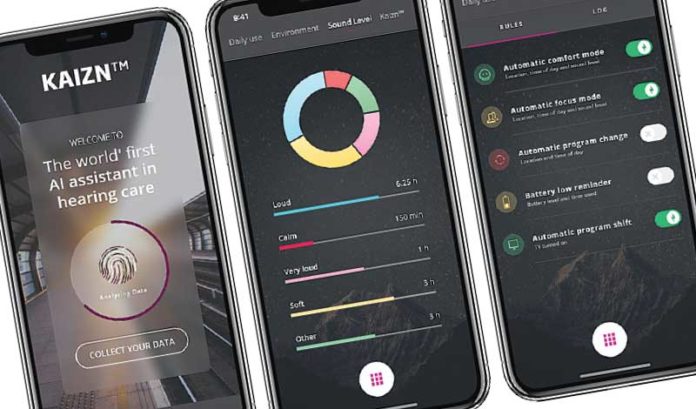 Gary Rosenblum, president of Oticon Inc., says hearing health technology is moving in a new direction — and he means it literally.

The basis of hearing aid technology has for a long time been that these medical devices allow wearers to better understand speech in a headlights-like directional field in front of them, suppressing other sounds in a loud situation.

But the newest technology from Oticon, a leading hearing aid manufacturer with a large U.S. base of operations in Somerset, is taking a wider view.

Rosenblum said Oticon’s Opn fleet of products, which it has been steadily rolling out over the past two or so years, ditches directionality for a different approach: It takes in sounds from all around its wearers. New processing technology in the device analyzes the dynamics of surrounding sound and helps wearers differentiate between speech and background noise.

“Instead of having that field of hearing be static … it scans the entire environment around the head and processes it for a much better experience,” Rosenblum said, adding that it can help people handle multiple speakers in a noisy environment.

One of the misconceptions about hearing aids — and the difference between these medical devices and other solutions marketed over the counter — is that they are simply amplifying sound. As Rosenblum explained, the real value of hearing aids is the ability to discern speech and diminish unimportant noises. At a party or in other circumstances, that’s not easy to do.

To that end, Opn — a device with Bluetooth capability, one that Oticon markets as the world’s first internet-connected hearing aid — is pushing the boundaries when it comes to helping hearing aid wearers navigate tough scenarios for hearing.

Oticon recently unveiled an artificial intelligence assistant that learns about the preferences of Opn device wearers to automatically adjust their hearing aid settings or alert wearers when those settings could be better optimized. The solution, which it calls Kaizn, received the 2019 CES Best of Innovation Award in the Software and Mobile Apps category.

“We’re really excited about this innovation, which we’ll be launching in the summer,” Rosenblum said. “And (Kaizn’s automation) is not something the wearers are even going to notice, they’re just going to have better hearing experience.”

There are features to these internet-connected devices and the app that’s being introduced that make them sound like neat consumer electronics gadgets, such as functionality that allows it to connect with the sounds of a phone, the doorbell or even the microwave.

But Rosenblum said the emphasis his company places in the development of its hearing instruments and software is not on those bells and whistles, but on improving sound quality and the hearing experience. He added that hearing health’s importance in the health care spectrum is taking on new meaning today, as strong correlations between untreated hearing loss and cognitive decline are being identified.

If Oticon is at the forefront of helping patients manage hearing loss, then, by extension, so is New Jersey. The company’s Somerset base is loaded with more than 500 employees, and it plays a key role in not only the operation of Oticon’s regional market — the company’s largest — but also its global business.

New Jersey has been the Denmark-headquartered company’s home abroad since 1979. And it’s clearly not changing directions on that.

“One of the real positive things about being centrally located here is we have a tremendous talent pool to choose from,” Rosenblum said. “I’ll tell you — if I ever had to start my own medical device company, I’m going to do it here, because, with the wealth of talent, we’ve had no problem filling positions (across many different roles).”