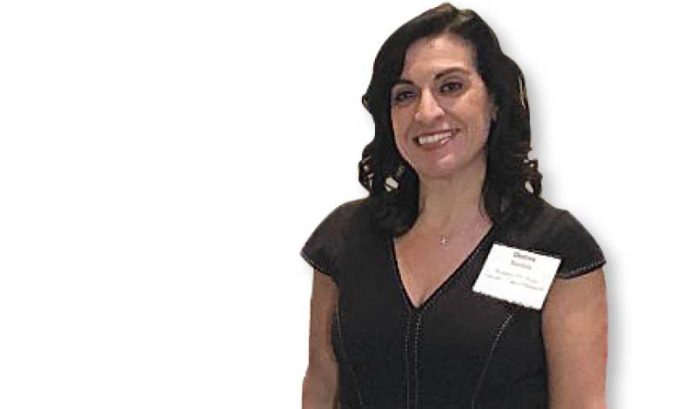 In our busy, hectic world, where we deal with so many people and personality types, some have a lasting effect on your life and need to be recognized and honored.

It’s difficult to refer to Denise Bartone in the past tense, as we had become colleagues and friends just this past year. The tragic loss of this kind and considerate human being no doubt has had an impact on me and so many colleagues in the food industry she worked in. I’ve received so many phone calls from mutual friends and colleagues expressing their disbelief and grief at her passing.

Denise and I worked on a food and beverage project together and, as we communicated back and forth on ideas and project details and deadlines, I truly was touched by her dedication to her job, her family and those around her. She was a food marketing professional at Rutgers Food Innovation Center in Piscataway, and in that role and others, she was truly a thoughtful, compassionate and caring individual who you could always count on to be “in your corner,” who always would find a way to encourage those she worked with.

My first week on the job here at ROI-NJ, I set up a meeting with her and the staff at the center. I walked into the conference room to talk about future projects, and, as we sat down, I was surprised to see a birthday cake with my name on it. She had found out my birthday was the day before, and wanted to celebrate it.

That was the kind of person Denise Bartone was, putting others ahead of herself and finding ways to encourage and lift others up!

Wow: Just think what things would be like if we had more people like her in this world.

Denise, thank you for your kind and generous heart that you shared with your colleagues and friends. Though you had just a short time here with us, we are forever touched and we will always remember your dedication and loyalty to us! You will be greatly missed, and your daughters and loved ones are in our thoughts.

‘No Tricks. No Shticks’: Bingo now open in Lakewood

We all recognize that a “Bingo” sign usually represents a fun, chain-smoking Friday night at a VFW hall. Well, think again … this one represents a new way of shopping for Kosher food. Bingo is New Jersey’s newest Costco-style, “mostly kosher” warehouse store, and it’s just opened a second U.S. store, in Lakewood. The store is located in the Town & Country Shopping Center and is about 70,000 square feet. The company also opened a store in Brooklyn, New York, last year.

Situated right on Route 70 in this heavily Orthodox, kashrut-observant town, the superstore is selling tchotchkes in bulk, and also offers kosher meat, fish, fruit, vegetables and specialty desserts like halvah, rugelach and babka.

Bingo is a partnership between Weiss and Osher Ad, a grocery chain with 20 stores in Israel.

“This is the second store,” said Yehuda Lanaido, managing director at Osher Ad. “We plan to open many, many stores.”

Bingo Wholesale is part of a fast-growing retail and wholesale segment that caters to a market for specialty and kosher food, said Burt Flickinger III, a New York-based supermarket analyst.

While the newly opened Bingo obviously targets predominantly Jewish consumers, Flickinger also said that its prices and quality make it “a United Nations for consumers.”

With a company motto that promises, “No Tricks. No Shticks.” it might be worth checking out, bubbelahs!

MEND Gala for good cause on March 9

Mark your calendars to support a great local charity for its special mission! MEND will host its annual gala March 9 — the Green Bean Gala — at The Woodland in Maplewood. The theme is built around “the green bean,” a converted school bus MEND uses to collect and distribute healthy food to its patrons, which is at the heart of MEND’s goal of addressing the root causes of hunger.

MEND, or Meeting Essential Needs with Dignity, is a hunger relief network serving Essex County since 1980. In 2018, MEND served more than 128,000 patrons, nearly 40 percent of whom were children. MEND’s tagline is “Together we feed our community.”

MEND’s mission is simple: “We help strengthen food pantries across our community through fund-raising efforts, healthy food donations, volunteer and outreach programs, and by bringing together its network of pantry managers to share ideas and best practices.”

Word has come to the “Food Fella” that Diana Food, a pioneer in the development of natural ingredients and flavorings for the agro-food industry, has inked a lease deal with commercial property owner Alfred Sanzari Enterprises for office space at Heights Plaza, located at 777 Terrace Ave. in Hasbrouck Heights.

Its lease of 8,455 square feet, according to sources, will provide a new home for its food testing and research and development operations as well as executive, sales and administrative teams, while providing the firm with ample room to grow operations out of a well-located, modern building. Prior to coming to Heights Plaza, Diana Food had been splitting its administrative, executive and sales teams between offices in Saddle Brook and Teterboro.

With a presence in 14 countries across the globe, Diana Food is at the forefront in developing healthy and clean ingredients for the changing demands of consumers. It has a dedicated team of agronomists that work closely with seed producers, farmers and researchers around the world to bring their food clients a wide variety of natural ingredients.

All the best to Diana Food in its new home!

Happy to report a new craft brewery opened with much fanfare Feb. 2 in the northern New Jersey enclave of Hackensack. The owners, Mike Jones, Alex Ferenczi, Herbert Lamont Barr III and Irfan Qureshi, are a close-knit group of friends who decided “It made more sense to sell Mike Jones’ beer than to just drink it all.” … Thank you for sharing it with us, guys!

According to its website, in 2017 it secured a 4,000-square-foot warehouse at 78 Johnson Ave. in Hackensack. Roughly two-thirds of this space is dedicated to manufacturing and packaging beer. The remaining space is used as a taproom.

Hackensack Brewing is setting out to be a small-scale microbrewery, focused on producing a wide variety of fresh, quality beers. Offerings run the gamut from classic, time-tested beer styles to unique manifestations of those styles with Hackensack Brewing’s own unique twist. I’ve tried the Pepper Coast, and I can tell you it’s a winner, definitely worth a try, but the business has a variety that should satisfy all craft beer lovers.

Though the beer will be found primarily in Hackensack, there will also be a handful of select craft beer bars carrying their products outside of the city limits. As the inventory builds, they will grow their distribution in other areas of the state.

We wish the team at Hackensack Brewing much success, and I can tell from the crazy opening day crowd that filled the brewery to capacity, you’re off to a good start and will capture a good chunk of the local craft beer market. Cheers!

A new food franchise concept made its debut in New Jersey just two weeks ago, adding French Fry Heaven to Newark’s diverse landscape of fun food. The new location, at 155 University Ave., is just a short walk from the Rutgers School of Business.

According to Scott Nelowet, director of franchise marketing for French Fry Heaven, the concept started as a mall kiosk-only, snack-only brand in 2010, but has recently grown into an even bigger meal idea. In 2015, Nelowet said, he brought in a consultant group from the Wing Stop franchises to help him create a new vision and new ideas for the french fry chain to continue moving forward. He said of the consultants, “They were geniuses, and they really helped us get to the next level for rolling out this concept.”

Well, the franchise has now been purchased by a company called Hickory Foods, which also owns Bubba Burgers and Peterbrook Chocolate, and, yes, there is a chef responsible for these unique french fry meals such as Italian Chicken Parmigiana, Chipotle Chicken Taco, Robusto Bruschetta and Classic Canadian Poutine. They are the recipes of veteran corporate chef Jeff Smith, who started with Hickory at Hickory’s Peterbrook Chocolate division. Nelowet said the company is ready to roll out more franchises in two specific regions, the Northeast and Southeast U.S. New Jersey ranks high as target market area for more franchisees, and the franchise team and Nelowet are both anxious to show the concepts success for these “spud-tacular” menu options.

Expect more French Fry Heavens to be served up as a main course here in New Jersey in 2019. For more information, go check out its site: frenchfryheaven.com.