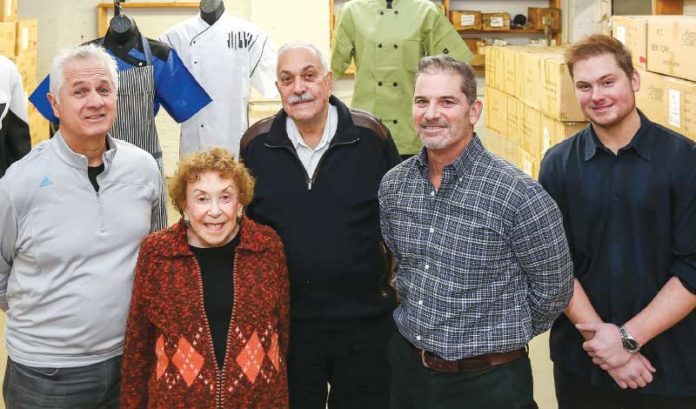 “It always has been about making chefs’ lives better, with the chef being at the forefront of every decision we make,” he said.

Nadler, who began working for both his father and grandfather in 2014, can easily rattle off some of the company’s key advancements in the industry:

But the story of Happy Chef, an international manufacturer of culinary and hospitality apparel that currently is headquartered within 70,000 square feet of warehousing, offices and embroidering space in Butler, is not just about innovation.

The company has continually changed with the times, both in the products it produces and the leadership that heads the company.

And it’s been that way since Nadler’s grandfather, Chairman Joe Nadler, founded Happy Chef more than 30 years ago.

It all started in the 1950s, when Joe Nadler began working with the New Jersey Linen Rental Association, training under Jack Orlinsky.

He said his ability to make contacts allowed him to start his own linens rental company, Santowel, in 1958.

“I had solicited and built up enough customers to start a route and purchase trucks,” Nadler said.

The couple had a son, Jim, who would frequently join Joe Nadler on his routes when he was a small child.

In 1975, the company shifted for the first time, as it began manufacturing its own linens for purchase under the name J.H. Nadler Textiles Inc.

“I started contacting the American mills, which took some work, to begin manufacturing and distributing items such as tablecloths and napkins, sheets and pillowcases, towels and so forth,” Joe Nadler said. “It was a one-man, home-based business that allowed me a good living and the time to take my son to tennis practice in the afternoons.”

Jim Nadler began working as an accountant in Atlanta, but it didn’t prove to be a good fit, his father said.

“He called me one day and said, ‘I hate accounting — I want to come home and be in business with you,’” he said.

Jim Nadler joined his father in business in the mid-1980s to help implement some key changes — specifically, branding and what, exactly, they were to keep manufacturing, Joe Nadler said.

The decision was made to start transitioning into chef uniforms — and to change the name.

“I said, ‘Well, if we are going to start private labeling our merchandise, we have to have a catchy name that people will remember,’” Joe Nadler said. “That’s how Happy Chef was born.”

On average, he said, Happy Chef will introduce three new colors each year to be on par with fashion-forward design.

Jake Nadler, who serves as brand manager, said it’s just the latest way the company is changing with the times.

“The problems chefs face have not changed over time,” Jake Nadler said. “The kitchen is always going to be a very hot and hectic place, so chefs and the kitchen staff are always going to need apparel that helps them stay cool and agile.

“But, right now, with the rise of the celebrity chef and the popularity of Food Network shows, chefs are wanting their uniforms to be more fashionable and recognizable. This has allowed us to create more stylish garments that are often inspired by current fashion trends.”

Happy Chef also employs 40, many of whom have been with the company for years.

“In fact, when the guy who was in this space previously moved his business out of state, he said, ‘I’ve got these two guys — they’re great — can you use them?’ And I said, ‘Sure!’” Jim Nadler said. “Now they’ve been with us nearly 20 years.”

As for Joe and Sheila Nadler, who now works as a bookkeeper with Happy Chef, retirement is not for them, they said.

Which is great, Jim Nadler said, as Happy Chef has doubled its growth over the last 10 years and plans to do more of the same over the next decade.

“We’d like to double our business and continue to expand internationally,” Jim said.

Underpromise, overperform — and tell the truth 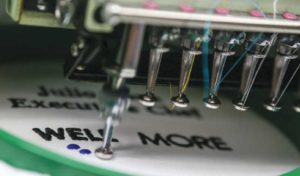 One word that drives the organization of Happy Chef, Joe Nadler, its chairman, said, is integrity.

“When (son) Jim (Nadler) and I started working together, I said, ‘There are a lot of things I can put up with, but the only thing I cannot is lying — if our customers ask for something unreasonable, we simply tell them it cannot be done,’” Nadler said.

Jim Nadler, president, said he learned his lesson at the start.

“When I would answer the phones early on, for example, the customer would get upset if they received an order on Thursday and I had told them it would be in by Wednesday,” Jim Nadler said. “The customer was not upset that it would be in on Thursday, only that I had given them false information.

“We’d rather underpromise and overperform, telling customers that an order will be in within seven days when it actually comes in three.”

Though not a complete list, some of the organizations Happy Chef contributes to include Action Against Hunger, Fedcap, ProStart, Share Our Strength, Children’s Aid, and Community FoodBank of New Jersey, Jake Nadler said.