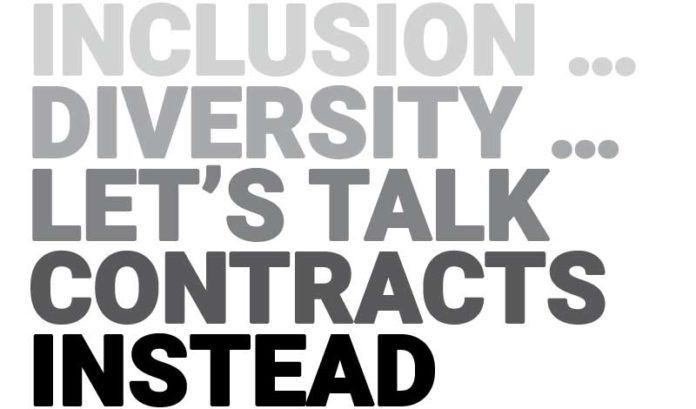 Cynicism may not be warranted, but healthy skepticism? Maybe.

If John Harmon, CEO and president of the African American Chamber of Commerce of New Jersey, were to impart a word of advice, especially during Black History Month, it might be to keep some of that in reserve amid back-patting about diversity.

“Many corporations or agencies in New Jersey like to talk about diversity — but, sometimes, it’s not represented in their spend in terms of actual contracts with African-Americans,” he said. “By and large, New Jersey is struggling in this regard. Organizations will tout strong minority participation, but when you drill down into specifics, African-Americans are often at the bottom.”

His organization, as always, is out to fix that.

But to know how to do that, it helps to have some details about the problem. In New Jersey, making that sort of data available hasn’t always been a priority.

Count on it being a priority for Harmon. His organization is pushing harder than ever for a detailed disparity study to determine how well agencies are doing in regard to contracts with businesses run by African-Americans or other minorities.

Out of that, he’s hoping it’s used to shape some minority-owned state contracting goals for public entities. That’s something Harmon has had on a wish list for many years.

The time for it is now, he said.

“We believe that this would incentivize more participation from minority-owned businesses,” he explained. “New York has a goal of 30 percent for these contracts and a very aggressive system in place. But in New Jersey, that doesn’t exist. We’re neighboring states — it makes no sense at all.”

The argument he makes for it isn’t an emotional appeal for anything like a handout. It’s this: Taxpayer dollars from minority communities should at least have the possibility of being repatriated back to those communities. It’s also a matter of holding agencies accountable.

“In particular, utilities come to the state for rate hikes and incentives for infrastructure projects, but their numbers on minority participation have been poor, year-in and year-out, and there’s no accountability in getting them to improve,” he said. “So, we’re going to advocate for a statewide assessment asked of utilities annually to include their spend and hiring practices when it comes to minorities and women.”

Information on those hiring practices is something that’s kept too close to the vest by public organizations currently, Harmon said.

When it comes to the energy sector as well as other industries, especially in the private sphere, sometimes testimony from businesses is all there is.

“(African-American-owned) businesses can tell you which ones really give them a forum to present their services and which refuse to,” Harmon said.

Ed Jordan, consultant with Voorhees-based Industrial Commercial Cleaning Group Inc., a janitorial and facility maintenance firm owned by an African-American woman, said the business has had to give up on work with certain industries due to difficulties in having the firm fairly evaluated in the contracting process.

Hanford Jones, who works for the same firm, happens to be one of the region’s watchdogs when it comes to burrowing into the numbers behind contracting with black-owned firms. He regularly reviews state contract documents under public records requests to determine how agencies are truly doing on working with African-American businesses.

He said he’s found New Jersey limited in terms of transparency. But what he has seen over the years, he added, is that there’s no doubt it’s a trying environment for black businesses.

“The language has been corrupted in a way that hurts black business owners,” he said. “And the whole terminology around small business has never created a problem for people to want to make special exclusions. When it comes to set asides for black businesses, it’s seen differently.”

It’s a complicated issue, and one Jones has been involved with for decades.

“I can’t say there’s no hope, because then there’s no point to keep trying,” he said.

And you won’t catch Harmon turning cynical, either.

“It appears that this administration, with the hiring of a chief diversity officer, the state’s first, is on the same page,” he said. “That new officer is making rounds with various state agencies to find out who they’re spending with and how much — and if they’re not doing a good job, finding out why. So, I’m optimistic that we’ll get change, but if we don’t have people continuing to make this important issue, there will be no pressure to get it done.”

Reach John Harmon of the African American Chamber of Commerce of New Jersey: jharmon@aaccnj.com or 609-571-1620.