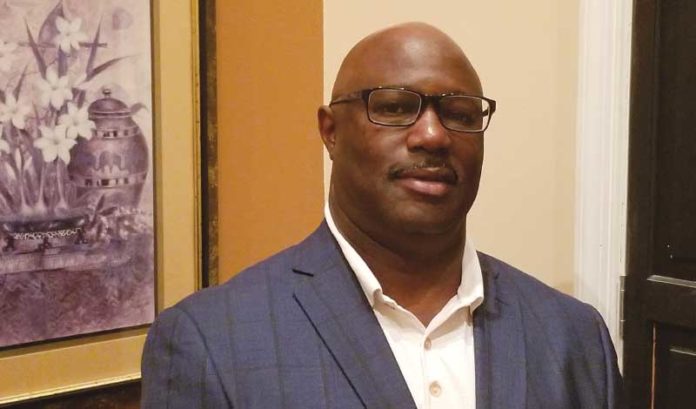 He’s an expert in environmental site investigations of brownfield sites set for redevelopment after years of abandonment. Those projects are quite often located in urban communities, places that sometimes feel just as forgotten.

Lewis finds what’s hidden there, too.

“One thing my father used to say to me is, ‘There’s gold in the ghetto,’ by which he meant there was a lot of value in the people there, you just needed to expose, nurture and harvest that talent,” he said. “We can make a real impact in our community if we look at it that way. We can create jobs in communities and be part of the solution.”

His company, which has a base in Newark, prides itself on participating in programs that give back to the communities with which it regularly interacts through its work.

“We see the highways during morning rush-hour commutes — it’s all automobiles moving into urban communities and then leaving right after work,” he said. “They’re leaving, but not leaving resources in communities. You benefit communities by keeping resources local, and we want to be part of that.”

Since its 2010 inception, the building inspection and site remediation firm also has made a point of hiring diverse personnel for its 15-person team, Lewis said. It just makes sense: His client base, the communities his company focuses on and New Jersey as a whole are the picture of diversity.

Still, he believes minorities are sometimes sidelined in this industry. Not to mention, African-American-owned businesses come in scarce supply in the environmental services sector.

“There are very few African-Americans in this business,” Lewis said. “In my lifetime, in New Jersey, I’ve come across maybe five or six total who are environmental consultants.”

It’s no surprise then that Lewis is appreciative of having a voice like the state’s African American Chamber of Commerce. His clients span different private, public and nonprofit sectors, but he’s eager to play a role in the expansion plans of utilities, and the chamber’s advocacy has been invaluable in getting his firm’s qualifications a second look from them.

There’s no shortage of competition in the region from other firms doing environmental assessments. National firms make for particularly fierce competition.

But it’s hard to match Lewis’ local commitment or the zeal he has for mentoring in an industry with seemingly limited entry points. Without coming from a certain educational milieu, environmental services jobs might seem like a far-flung prospect to many.

“And, without a degree, it’s true you may not necessarily be able to be an environmental scientist, but there’s opportunities for those in a technician role,” he said. “We’ve hired people for that job, even some who may have made some mistakes in the past, but we’ve trained them as environmental technicians. Having not known about this, they’ve now been put on career paths.”

Lewis’ employees have been overwhelmingly supportive of these initiatives, he said. For him, nothing is more important than that.

“This is not just a ‘me’ company, but a ‘we’ one,” he said. “I’m fortunate that I have a talented team; I might be the captain, but I really rely on my team to guide this company.”

At Manufacturing Day, lots of energy and (cautious) optimism