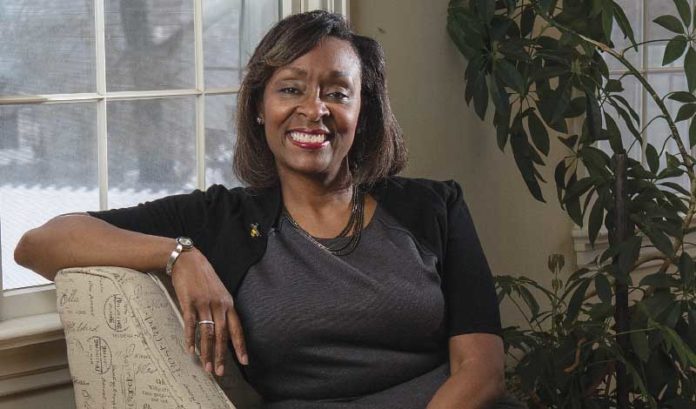 Kim Lemon’s enterprise is the very definition of small business — it’s a long-running, one-person operation that brings in less than a million dollars in revenue each year.

She’s chief cook and bottle washer, as she puts it.

But the impact she has at her executive coaching firm, The Lemon Group, is far from small.

Since its 2005 inception, Lemon’s business has consulted for companies in a wide array of industries — including some of the region’s largest corporations and health care networks. As the person tasked with grooming those organizations’ top leaders and up-and-comers, the mark she’s left on New Jersey business has been significant.

Many of the businesses she’s taken on as clients come from the world of finance, which is the sector she emerged from, as well. She spent about 20 years in various human resources positions at Wall Street behemoth JPMorgan Chase.

“As you might imagine, banks, especially early in their development, are increasing market share through mergers and acquisitions, and I was there along for the ride,” Lemon said. “As my experience grew, it increased my accountability for really driving changes and implementing them.”

It’s about NOT micromanaging, and giving people some autonomy to do what they need to do. That’s one of the most important principles of leadership. Business leaders need to consider engaging folks in that way — not so that it’s a free-for-all, but so people have the running room they need. — Kim Lemon

Her increasing responsibly led to her carving out her own business doing what she felt she had become adept at: helping others be productive, better engaged and more collaborative.

To some degree, being an African-American woman makes her a standout among local executive coaches. Lemon is also a recipient of a YMCA Black Achievers Award, which recognizes successful African-Americans in the corporate arena.

But there are a lot of people, both in New Jersey and elsewhere, doing executive coaching, talent management, people strategy — or any of the other labels this area of business services has been given. The nomenclature is always changing as these services evolve.

“Back in the early days of executive coaching, back in the late ’70s or early ’80s, it was either only at the executive level that you saw them in organizations, or maybe sometimes coaches were used to come in and fix things if a leader was very talented but presenting some sort of derailing behavior,” Lemon said. “Now, this is seen as a development resource for all layers of an organization.”

Lemon does it all. And businesses call on her expertise to guide leadership and employees through some tough situations: offshoring, outsourcing, mergers or other business shakeups.

She described a recent example of having to help a local equity research firm’s leader turn the ship with the introduction of a new business model:

“He was surprised to find people were not welcoming to the notion of change, even if it was paramount to the company’s continuation,” she said. “If they didn’t make changes, the company wouldn’t be there in five years — to him, that was compelling enough. Not everyone will buy into that, however.

“There are different motivations and different modalities and approaches to communicating that platform. Sometimes you need to reach people in the heart and sometimes in the head.”

Different leaders have their own style and preferences in how they want to handle challenges their organization is facing, she said.

Lemon did offer some free-of-charge advice for local business leaders, based on what she’s seen as effective through her years of coaching: Empower employees.

“It’s about NOT micromanaging, and giving people some autonomy to do what they need to do,” she said. “That’s one of the most important principles of leadership. Business leaders need to consider engaging folks in that way — not so that it’s a free-for-all, but so people have the running room they need.”

Will long wait for sale of cannabis for recreational use hurt...