Home Industry Tesla is building its biggest N.J. facility. If it is allowed to...
Facebook
Twitter
Linkedin 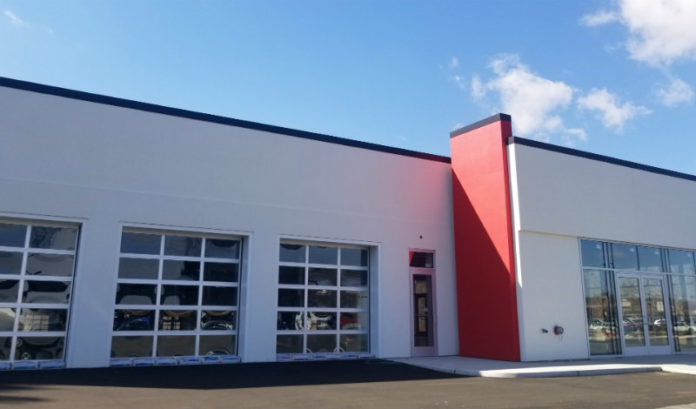 A new Tesla store on Route 1 in Lawrence Township is one of the worst-kept secrets in the state.

Tesla owner forums have been tracking it since last April and some trade groups already have publicly called out the new location.

The approximately 20,000-square-foot facility, which would be the company’s largest in the state, serves as a symbol of Tesla’s bullish outlook for New Jersey.

It is currently a shell of a Tesla store, with car service bays and doors in place — but nothing else.

And, although the company plans to open the store later this year, it all hinges on whether or not the Legislature repeals a cap on the number of service centers Tesla is allowed to have.

The new location would be the fifth in the state for Tesla. And Tesla has been limited to four licensed service and delivery centers since 2014, when the state was lobbied to protect car dealers, which operate as franchises, from having to face direct competition from direct-to-consumer manufacturers.

The cap, as it is called, is the key to Tesla’s future in New Jersey.

“The cap is a very real factor in our executive decision on where and when to open,” Ryan Barnett, a policy adviser for Tesla, told ROI-NJ.

The company is lobbying the Legislature to have the amount of locations changed. On Feb. 14, legislation was introduced that would allow Tesla to open as many as 10 more locations over time.

Barnett said Tesla should not be bound by franchise laws for one simple reason.

“We’ve never had a franchise agreement anywhere else in the world,” he said. “So, there is no pre-existing agreement that we are undermining at the local level.”

Tesla officials feel the store could play a significant role in helping Gov. Phil Murphy meet his desire to dramatically increase the number of zero-emission cars on the state’s roadways.

And some believe the store would feed the state’s demand for more electric vehicles — New Jersey is currently the seventh-strongest state in terms of Tesla’s market demand.

But all of this can only happen if the store is actually allowed to open.

Part of the spike in purchases came from a federal incentive that gave buyers a $7,500 tax credit on their purchase. The discount shrinks to $3,750 once the car maker meets a target of 200,000 sales.

Tesla met the target in July 2018 — the first company to do so — and General Motors followed, meeting the mark earlier this year. Tesla then lowered its car prices by $2,000 to help balance out the reduced credit.

But there have been ups and downs for the electric vehicle leader, which currently holds 85 percent of the market share — but still only counts for less than 1 percent of overall auto sales in the country.

Tesla recently posted its second profitable quarter in Q4, but that was followed by a round of layoffs and a reduction in car options — notably only selling a long-range model and ceasing production of the lowest-priced Model S. And Consumer Reports removed the Model 3 from its recommended cars list due to reliability issues.

Tesla shares fell 5 percent Monday after the Securities & Exchange Commission asked a judge to hold CEO Elon Musk in contempt for violating a court-ordered deal in which Musk was not to tweet information about the company without preapproval.

Barnett blames the cap for a slow-roll of shipping and delivery of the Model 3 — which, ironically, played a role in why the company showed a profit. In New York, the company has been restricted to five locations.

But Barnett said the new location near Princeton, which would also serve the southeast Pennsylvania region, is being built to help alleviate the slow delivery.

And impact the price.

Barnett said that, even if the number of locations remains capped, the company can still open what it is calling galleries — basically, storefronts where customers can walk in to learn about the technology.

But there are restrictions with those locations.

In addition, Tesla sells its solar panels at the same location as the cars.

Barnett said all of this proves the company’s premise.

“We’re not just an automaker,” he said. “We can’t sell through the traditional auto dealer model.”

While the Legislature mulls over whether to walk back the location restrictions on Tesla, there is a debate over whether Tesla has four or five locations: It has four stores, in Cherry Hill, Paramus, Short Hills and Springfield, along with a gallery in Garden State Plaza in Paramus.

The New Jersey Coalition of Automobile Retailers, or NJ CAR, is the statewide trade association that represents the Garden State’s more than 500 neighborhood new car dealers, which employ more than 38,000 people.

It has concerns about Tesla, and that it has found a way to open more than four locations, which has been operating in New Jersey under an exemption passed by the Legislature and signed by Gov. Chris Christie in March 2015.

The new location is one of three planned for the state, and the other two would likely be galleries.

NJ CAR President James Appleton said the special exemption was granted to Tesla four years ago because state officials felt the startup electric carmaker needed special consideration and that, once the company was up and operating at four factory-owned retail locations, all future Tesla stores would conform to existing franchise laws, which govern every other car dealer in the state.

Those laws, Appleton said, are not there to limit commercialism but to create local jobs and business. And not just for the initial sale, but for service visits, including safety recalls.

NJ CAR just wants what it calls a fair fight. This is not, he said, David versus Goliath.

“When Tesla first came (to the state), it was operating as a startup,” Appleton said. “Their market cap is equal to GM now, so what need for special dispensation does this company need?”

In addition, Appleton said, the current system Tesla has does less to contribute to the local economy and more to add to the company’s coffers in Silicon Valley.

On the other hand, if New Jersey lifts the cap on the company, it could expand significantly and put more electric vehicles on the road — a point Tesla officials are hopeful the Murphy administration will back.

If the legislation does not pass, Tesla would have to decide which current store to close in order to open the new location.

“The market is ripe and ready. We feel half-measures to combat the effects of climate change are no longer acceptable,” Barnett said. “I think the Murphy administration has made clear that this is something he is committed to making New Jersey on track to help solve.”