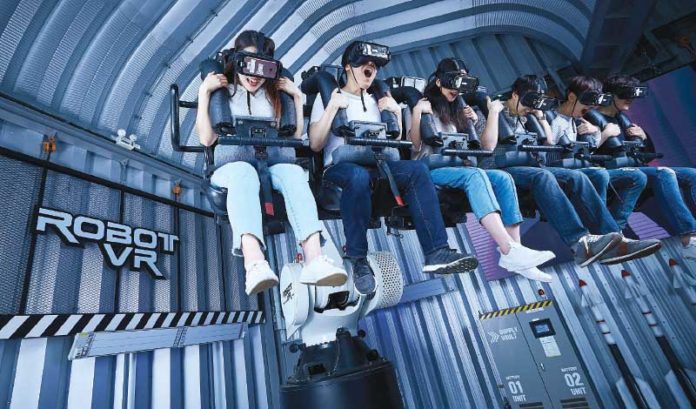 Ron DeLuca, CEO and principal of the Old Bridge-based R.J. Brunelli & Co., said the reality today is that the shuttering of Toys ‘R’ Us and other retail staples left a big hole in local shopping hubs.

“Toys ‘R’ Us was massive, hundreds of stores in New Jersey alone, coupled with Sears and Kmart closures,” he said. “Now, what we see occurring is that the uses refilling those vacancies break from what was traditionally there.”

Legend Heroes Park, which is introducing worldwide a new concept involving an immersive indoor virtual reality experience, is one of those. R.J. Brunelli & Co. was announced last month as the company’s exclusive broker for its entry into the United States market.

“We’re getting to a situation in real estate where these uses are becoming the norm in mainstream retail development uses, not just in malls but even big-box centers,” DeLuca said. “And entertainment in particular is being embraced to fill many vacancies.”

With still-standing traditional retailers finding themselves at a crossroads with new e-commerce dynamics, they need shopping centers to be more destination-like, DeLuca said. When people have more of a reason to visit retailers because of their surroundings, the thinking goes, they might be inclined to stop in regularly for in-store returns or other business.

With so much shopping taking place online today, the relevance of a lot of retail business is on shaky ground. However, there have been some standbys in retail centers that have proved resilient to the internet shift, DeLuca said, such as grocery businesses.

“Four or so years ago, the trend of home delivery seemed like it’d be huge,” DeLuca said. “For whatever reason, it didn’t take off with the magnitude that people had anticipated. It began to wane.”

That is, he said, until Amazon’s purchase of Whole Foods.

“So, that’s putting a wrinkle in the trend, and home delivery’s relevance is coming back,” he said “But I still don’t see the grocery segment going massively in that direction. I know when I go the grocery store, I want to pick the plump apples I want to eat for the week. Sometimes, what people get at the door isn’t what they want.”

“I don’t think it’s as susceptible to that e-commerce disruption as other retail segments,” he said. “The better grocers are already evolving their model.”

Of course, Toys ‘R’ Us or other legacy retail was just as sought-after in its heyday, Harding added.

Looked at one way, the closure of something like Toys ‘R’ Us presented real estate professionals with opportunities. Those toy emporiums took up a lot of quality locations that are now available, Harding said. His firm just finished up a pair of new deals in buildings that housed the former international chain.

But a lack of potential tenants for larger storefronts could be a problem, Harding said. And if more corporations start to scale back brick and motor operations, vacancies will really increase in visibility across Garden State retail hubs.

The potential of that might rest on how well business is doing on the whole in coming years. In an industry so tied to the economy’s health, Bill Hanson, president of commercial real estate firm NAI James E. Hanson, said the potential of a recessionary period is a regular topic of discussion.

“Especially because we’ve had this very long economic expansion,” he said. “It makes people want to sit on the sideline when it comes to the real estate market. But my view is that things seem to be under control for now.”

“We’ve had difficulty getting our arms around some projects,” he said. “The way we look at it as a lender is that there are still good malls and shopping center operators, and there’s still success stories, but we have to analyze these deals carefully.”

Even if Investors did complete a $42 million loan to refinance commercial mortgages on 27 retail properties in December, Orefice admits the bank walks away from quite a lot of potential retail deals today.

“Even as retailers adapt to new models, the truth is that we don’t know where the bottom is in this sector,” he said. “From the lending standpoint, I expect it’ll be hard to see that improving.”

In the meantime, local real estate firms will continue to be purveyors of drawing people to retail centers with entertainment concepts that sometimes break from the norm.

“Not always, but sometimes, we’re not just thinking as much about basic economics as the attraction a retailer might have as a pure draw to a shopping center,” Harding said. “It’s a very interesting time – challenging in some ways. You definitely have to be more creative.”

Beauty is in the eye of the beholder

It’s a registered trademark of Texas-based HomeVestors. As it turns out … the company buys ugly houses.

And, apparently, the property flipper, which purchases homes even in not-so-great shape, are doing a lot more of it in the Garden State these days.

“It’s actually one of the biggest growth areas we have in the country,” said David Hicks, HomeVestors’ CEO. “Part of the reason for that is the simple fact of there being so many people there, and such a large market. Also, because we deal with houses that are older and need repair, there’s a lot of older houses in that area because it’s an established market — and that means more opportunities for us.”

The company has more than 1,000 franchises, with 27 independently owned and operated in New Jersey.

“We just added more franchises there, and part of it is because the ones we do have there have done well,” Hicks said. “We started with just a few there, and now it’s becoming an exciting area for us.”