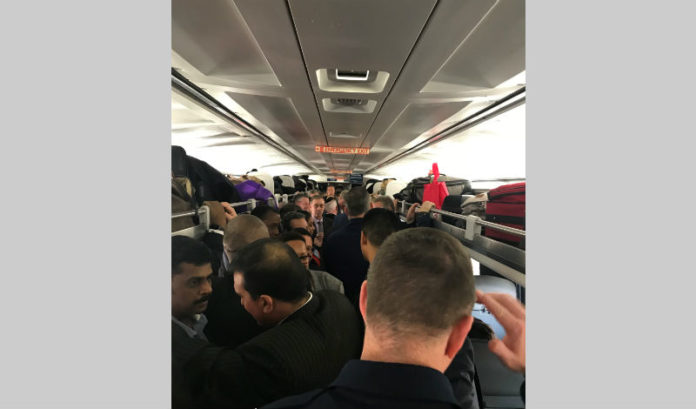 Here’s the bad news for the governor’s economic development team.

A random, totally unscientific poll by ROI-NJ reporters working their way through a crowded, noisy train lovingly known as the Walk to Washington showed that the top business and political leaders in New Jersey do not feel Gov. Phil Murphy has made New Jersey a pro-business state.

The worse news? One responder said they didn’t even think the governor’s team is trying.

“I object to the premise that the governor even wants to make this a pro-business state,” the person said. “Look at all the new rules and regulations he has passed and wants to pass. Tell me that is even slightly pro-business.”

And so it went, up and down the annual New Jersey Chamber of Commerce train to D.C., the ultimate networking party.

In the final count, 92 percent of the more than three dozen responders said some form of “No” to the following question:

“Every governor thinks they are pro-business. Do people outside of the New Jersey perceive the state that way?”

“No,” was a popular response.

“Not by a long shot,” was another.

“Are you kidding me?” was popular, too.

Everyone asked for anonymity.

And the reason is good news for the governor — and a reason there hasn’t been more of a public outcry.

“No, you can’t quote me,” one person said. “I do a lot of business with the state and I need to keep it.”

One person was willing to be quoted: Tim Sullivan.

As the CEO of the New Jersey Economic Development Authority, Sullivan is one of key people front and center in the state’s fight to attract and promote business.

Sullivan said he understands the concerns.

“It takes time to change perceptions,” he said. “It requires consistency and it requires doing some marketing and telling our story well.

Sullivan feels the state is getting the tools it needs to fight back.

“I think we took a big step forward when the governor announced his economic plan in October,” he said. “And we have the reauthorization of some of the incentive plans coming up. I think that will be a real opportunity to explain our vision and how we need to make the investments that we need to make.

“There are things like infrastructure, workforce and higher education — and, to be honest, education at all levels, including K-12, that we need to address.

“We have the world’s best talent, we just have to tell that story better.”

Sullivan sees hope. In fact, he said, he has seen it.

“The further away from New Jersey you get, the easier it is to make the case about New Jersey,” he said. “If you go to Europe and Asia, they see that New Jersey is a great place to be because of both our location and infrastructure, current challenges notwithstanding.”

Riding along the Northeast Corridor, the optimism wasn’t as high.

“The taxes and all the new regulations are crippling,” one person said.

Another was more biting — or, at least, more willing to use the governor’s messaging against him.

“When they said ‘stronger and fairer,’ he obviously wasn’t talking about small business,” the person said.

Consolidation, if done right, can succeed