Home Opinion Where else can you get the governor working the room, eager to...
Facebook
Twitter
Linkedin 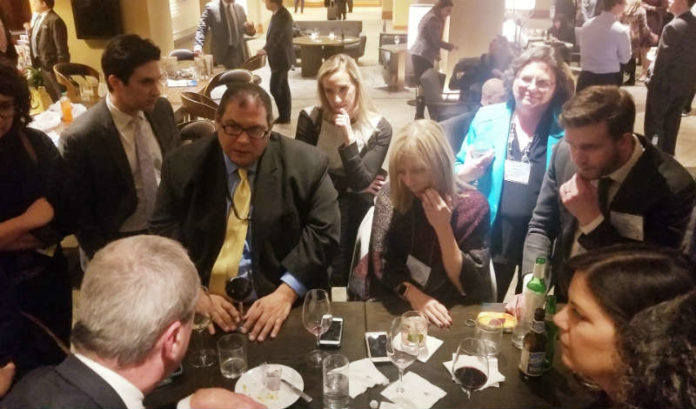 Everyone knows the Walk to Washington train trip is the ultimate networking opportunity in New Jersey.

Where else can you get more than 1,000 political and business leaders in all sectors coming together for 36 hours?

Those on this year’s trip got a little bit more.

Gov. Phil Murphy, after delivering the keynote speech at the annual Congressional Dinner on Thursday night, made his way to the hotel bar and held court.

Murphy had off-the-record conversations with the media and numerous leaders in the business community.

He worked the crowd for more than an hour.

And that was after he worked his way through the lobby, frequently stopping to chat with everyone and anyone who approached him.

This was the Walk to Washington at its finest.

So said Tom Bracken, the CEO and president of the New Jersey Chamber of Commerce, which spends a year making sure the 36 hours go perfectly.

The event drew more than 1,000 participants, more than 700 of whom took the trip down on an Amtrak train Thursday.

Those here in Washington, D.C., stressed it was not just the quantity of people, but the quality.

In addition to all of the business leaders, more than 50 legislators — including Assembly Speaker Craig Coughlin (D-Woodbridge) — were on the train. A record number.

Murphy’s late-night speaking tour was the first for a sitting governor that longtime riders could remember.

And he wasn’t the only member of his team making the rounds.

After years of Gov. Chris Christie forbidding his staff to mingle, this was an all-star meet-and-greet.

Bracken obviously was thrilled. He said this type of access is the key to doing business in New Jersey — often called the biggest small state and the smallest big state in the country.

“Every sector of the state is here, and they are captive for 36 hours. It’s the ultimate way to network. And in the state like this, where networking is so important, it’s a perfect fit.”

William Murray, executive vice president/national director, public affairs at MWWPR, said his group tells all its clients that the train trip is a must.

It’s not hard to rationalize, he said.

“It’s more than just a marketing opportunity. You have Assembly members and lobbyists on the train, but you also have public relations and marketing people and sales people. It’s critical that you’re interacting with them. I don’t know how you could miss it.”

Ron Ladell is on sabbatical. Seriously

Kean won’t give up on adding charitable deduction to N.J. income...