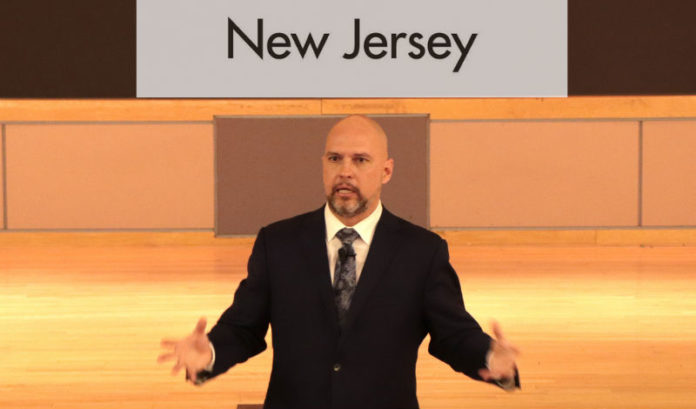 Eric Maddox, an infantry paratrooper, jumpmaster and Ranger in the Army for nearly a decade, said he was serving as a Chinese Mandarin linguist in Los Angeles in 2003 when he received orders to report to Baghdad, Iraq, to join the teams responsible for tracking down the most wanted people in the world — including Saddam Hussein and his senior regime members.

Maddox, having also been trained as an interrogator, was selected for the job — despite never having conducted an actual interrogation before.

“I was expected to bring in information that would help our commander make better decisions,” Maddox said.

Maddox told his story last week to the New Jersey chapter of the Entrepreneurs’ Organization, a global peer-to-peer network of more than 13,000 business owners with 186 chapters in 58 countries, including 118 founders, co-founders, owners and controlling shareholders of businesses in New Jersey that employ more than 3,500 and have $2.9 million in median sales.

“What we want to do as leaders is to get our people to say, ‘I’m with him — not because I can enjoy the crumbs of his success, but because that person is all-in for me first,’” Maddox said to the more than 50 members in attendance.

Shortly after arriving in Baghdad, Maddox said, he was told to pack a change of clothes —he chose a blue short-sleeve shirt — in which to interrogate prisoners found during a raid he’d be accompanying in Tikrit.

Instead, Maddox was there for six months, taking part in multiple raids and conducting over 300 interrogations.

“The Army psychological interrogation techniques are based on intimidation and the idea that, with conviction and authority, you can make a prisoner think you know everything about them,” he said.

But those techniques were not working, Maddox said. No one was talking.

“So, the next time I brought in a prisoner, I thought, just talk with this guy and keep him talking,” Maddox said. “Talk with him about his life, his family, his culture, what it’s been like living under Saddam Hussein, and maybe he’ll answer my questions.”

Sometimes, it would take some convincing, Maddox said.

“My basic strategy was to accuse them of being someone they could absolutely prove they were not,” he said. “And they thought, ‘If I can prove I’m not a jihadist in Afghanistan, I’m out of here.’ Think that guy wanted to talk then?”

Maddox said the more he “dialed-in” and listened — without making it about the goals the Army had there — the more the prisoners would open up, despite speaking with Maddox via a translator.

“I learned how to get inside the minds of these prisoners and break them down without using physical contact or torture of any kind,” he said. “It was simply about breaking their previous decisions not to cooperate with me.”

Maddox said in putting himself completely in their shoes and getting these prisoners to talk about their situations, he learned how to tell when they were lying.

“I would build up their worlds and, if aspects of their lives didn’t match up, I would use those smudges to dial in and identify the lies,” he said.

Maddox then used the lies the prisoners told to protect who they cared about most to get them to reveal further information about the insurgency, including logistics, communications, finances — and the names and locations of those involved.

“We built a diagram of the insurgency in Tikrit with more than 2,000 names on it, all leading to the one guy who ran it all,” Maddox said.

Every interrogation from then on was focused on those connected with Mohammed Omar Ibrahim al-Musslit, Hussein’s former bodyguard, Maddox said.

But after he interrogated Ibrahim al-Musslit’s driver — who happened to be the cousin of the head of security for the governor of Tikrit — operations were suspended and Maddox’s return to Baghdad was scheduled for the next day.

Maddox said he had gotten just enough information from the driver to persuade his commander to continue raids that night, including five safehouses, two addresses in Samara, a fishing pond along the Tigris river and an address in Baghdad, resulting in the capture of dozens of prisoners, including Ibrahim al-Musslit himself.

“I said to him, ‘You’re Mohammed Ibrahim, and I have been waiting to meet you,’” Maddox said. “And he responded, ‘You’re the interrogator in the blue shirt.’”

Word had got around, Maddox said, that when insurgents were captured and interrogated by the “man in the blue shirt,” they more often than not cooperated with him.

“But I released so many people that they couldn’t figure out if any of those people had actually been flipped,” Maddox said.

Maddox said he had just two hours with Ibrahim al-Musslit before his flight back home.

“I said to him, ‘There’s only one thing we can talk about and that is the exact location of Saddam Hussein,’” Maddox said. “I didn’t know what was going to come out of his mouth, but I knew whatever he said was going to tell me how to break him.”

Maddox said Ibrahim al-Musslit said he gave him too much credit and that he did not know where Hussein was.

“I said, ‘I didn’t know who you were when I came to this country, but the 300 prisoners I’ve interrogated and the 40 of your family members we’ve captured because you got them involved, they give you credit for ruining their lives,’” Maddox said.

That is when Maddox said he revealed to him that he knew where Ibrahim al-Musslit’s wife and 3-month-old baby were, but had chosen not to raid that home.

“I said, ‘What will Saddam Hussein do for you now?’” Maddox said.

Maddox left his prisoner with that thought as he boarded his flight home. That night, Saddam Hussein was captured in a pit at a farmhouse in Tikrit.

“He was found in the one place everyone said he was not and pinpointed by the person Saddam trusted to never give up his location,” Maddox said. “But I broke that man in 90 minutes.”

Maddox was subsequently hired as the first civilian interrogator for the Defense Intelligence Agency, traveling all over the world to conduct over 2,700 interrogations of prisoners from 25 different countries.

“Since Sept. 11, 2001, the thousands of interrogations conducted using the old techniques have resulted in just 4 percent of prisoners breaking,” Maddox said. “But me and my team were able to break prisoners at a rate of nearly 65 percent by doing just one thing: seeking to gain empathy.”

Distractions — from thinking about how little sleep you got to learning your child just got suspended at school to the very biases you feel toward the person you are speaking with — lower your listening abilities, Maddox said.

On average, people listen to just 25 percent of what they hear, he added.

“How many times have you had a conversation with a client, prospect, subordinate or superior in which you already have preconceived notions about who they are, how they are going to behave and the decisions they are going to make?” Maddox said. “Or, if we are having a conversation and they say something to us, how often do we think about how what they just said fits into what we want to accomplish on our agendas?

“We are missing the details that will help us to understand what they are trying to tell us.”

The No. 1 distraction, Maddox said, is thinking about what we are going to say next.

“People know when we are listening and when we are not,” he said. “And they appreciate it more when, if they stop talking, we don’t immediately respond.”

Maddox said he often creates his next point of conversation regarding whatever their last statement is so that he can truly listen prior to.

“People don’t want to be interrupted — they want to be heard,” he said.

Conversations, after all, are tests in which to measure how much a person can be trusted, Maddox added.

“There is no greater way to earn trust from an individual than to put that person ahead of yourself,” Maddox said. “I sat with prisoners who had been radicalized to kill us and I knew they were not impressed with my success. But, when I talked with them, I made them feel that I was listening to them so completely that I was putting their issues ahead of my own.”

Maddox said this very quickly earned their trust and encouraged them to associate with him.

“I learned to get inside people’s minds to gain their trust and influence by seeking to gain empathy in my conversations,” Maddox said. “And when you can understand the perspective from which someone is communicating, anything they say will become that much clearer. Think about it — when you speak with someone, are you typically aiming to understand their background? Their biases toward you and the world? Their agenda?”

We tend to be good listeners when we care about someone enough to consider those things, Maddox said, but it would have been impossible for him to care about the 2,700 prisoners he interrogated who all wanted to kill him and his comrades.

“I never once had an emotional feeling toward a single prisoner I ever spoke with, because I needed to let them completely take me on the ride of their life,” Maddox said. “I needed to jump into their shoes, and my emotions didn’t serve me in any way to do that. Everything that was me came out of it as I completely dove into their world.”

He did, however, use their own distractions to better serve his interests, Maddox said.

“Their distractions lowered their listening and, if I could find out what distractions things were, those were the portals of empathy that I would use to gain trust without caring,” he said.

Maddox retired in 2014 to write, speak and consult with others about what he learned and how it could apply to their own negotiations and leadership skills.

“If you want to see your world change in whatever business or industry you are in, I challenge you to ask yourself, how well do you listen? Do you make people want to be around you?” he said.

Area business leaders named to advisory board for PGA Tour playoff event that returns to N.J. in 2021

Cannabis conundrum: Court has vacated 2018 decision on licensing — so, what now?