Home Finance Murphy, in budget address, said he will save N.J. more than $1B...
Facebook
Twitter
Linkedin 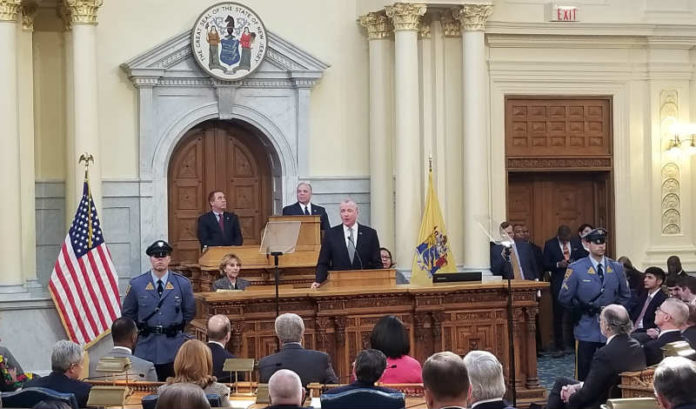 Gov. Phil Murphy said during his second budget address Tuesday that he will be saving the state more than $1 billion while pursuing new or controlled revenue sources — including an expanded millionaire’s tax.

“We are building a stronger fiscal house for New Jersey,” Murphy said. “We are replacing gimmicks with stability. For example, the projected surplus of the budget I signed last year was $765 million — a vast improvement over prior budgets. But, through careful management and keeping an eye on every dollar, we have grown our surplus by one-third over the year and are now set to close Fiscal 2019 with a surplus of over $1 billion.

“This budget will grow our surplus even more in Fiscal 2020, to nearly $1.2 billion. One-shot revenues are down to only 1.7 percent, a decrease of one-third over the current budget, and half the average yearly amount across the prior administration.”

In his budget proposal, Murphy said the state’s economy performed well and is projected to continue to expand moderately in 2019 and 2020.

New Jersey’s real GDP grew at 3.3 percent annually in the third quarter of 2018, preceded by 2 percent through the first three quarters year-over-year.

But national economic factors could affect the state’s performance, he said in his budget proposal.

“The Federal Reserve Open Market Committee is projecting U.S. real GDP to grow 2.3 percent in 2018, moderation from 3 percent estimated growth rate for 2018,” the proposal said. “Federal Reserve Chair Jerome Powell did note potential headwinds from slowing global economic growth and policy uncertainty regarding both Brexit and U.S. trade negotiations, and as a result the FOMC is taking a ‘wait-and-see’ approach regarding future increases in the federal funds rate.

Murphy said he is bringing back his request for a millionaire’s tax.

Last year, the state introduced a tax on those earning more than $5 million. Murphy said that will bring in $219.5 million, which, paired with other tax policy measures from last year’s budget battle, will boost the state’s gross income tax by 3.5 percent, to $15.6 billion.

Murphy wants to expand the tax this year to all millionaires, anticipating it will add an additional $447 million to the state’s coffers.

“My vision for New Jersey has never wavered — we need to continue to build an economy that works from the middle class out and from the bottom up,” he said Tuesday.

“We need an economy that embraces the future but stays true to the values of rewarding hard work, creating opportunity, and providing the tools people need to succeed.”

One revenue generator that will not be returning is tax amnesty.

The one-time program boosted the state’s coffers by $282 million, well over the estimated $200 million.

Of the taxes collected, 37 percent, or about $104 million, came from sales and use tax. The Corporate Business Tax came in second with approximately $82 million, or 29 percent of all taxes collected during the amnesty period.

In the end, Murphy is hoping all of these moves will be noticed by the outside world — and not just companies considering coming into the state.

On Thursday, Murphy said, he will meet with bond ratings agencies, making a case for the state to be upgraded.

“The real value is that (these moves) allow us to make the investments we need, to make New Jersey a stronger and fairer state for every family,” he said. “And, reaching these fiscal mileposts will not go unnoticed by the rating agencies, with whom I will visit later this week, and whose decisions greatly impact our future sustainability.

One senior administration official said the front office took seriously the challenge laid out last year to find savings after the criticism the governor faced of adding expenses to the state’s budget in Year One.

Many in the Legislature were surprised by the governor’s proposal and are feeling optimistic about this year’s negotiations.

One insider, who also was not authorized to speak publicly, said the state, at this juncture, does not appear to be headed towards a shutdown as it almost was last year.

The Legislature was prepared for a fight as late as last week, but after the legislative leadership was briefed on the budget proposal Monday, everything changed, several sources said.

“It’s not perfect, but it’s really good,” one insider said.

One key point of conflict will likely be the millionaire’s tax, which Murphy is pursuing once again this year, saying it will raise $447 million for the state.

The Legislature will have until June to negotiate, craft and pass legislation for the Fiscal Year 2020 budget.