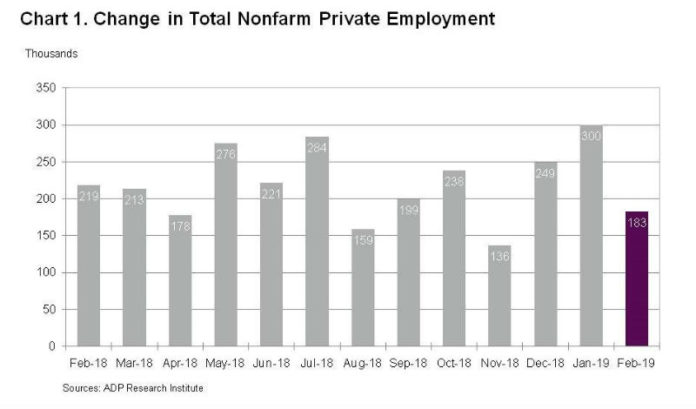 Private-sector employment is up by about 180,000 jobs this month, according to Roseland-based ADP.

The payroll and human services company said in its monthly ADP National Employment Report that the number of jobs grew by 183,000 positions between January and February.

“We saw a modest slowdown in job growth this month,” Ahu Yildirmaz, vice president and co-head of the ADP Research Institute, said. “Midsized companies have been the strongest performer for the past year. There was a sharp decline in small business growth as these firms continue to struggle with offering competitive wages and benefits.”

“The economy has throttled back and so too has job growth. The job slowdown is clearest in the retail and travel industries, and at smaller companies. Job gains are still strong, but they have likely seen their high watermark for this expansion, Mark Zandi, chief economist of Moody’s Analytics, said.

Under the goods-producing sector, construction brought in the most jobs, reporting 25,000 new roles, while manufacturing added 17,000 and natural resources and mining added 3,000.

One Rock wraps up acquisition of Innophos, names new CEO for...