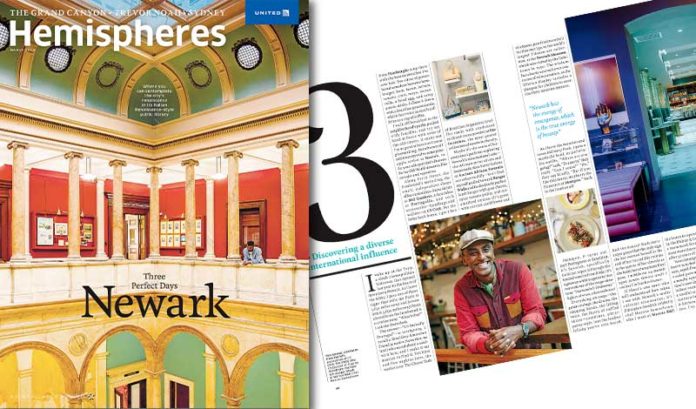 But she has one characteristic that differentiates herself from the others. She is the editor of a travel magazine.

After 17 years of being on the job at Hemispheres, the in-flight travel magazine produced by United Airlines, Carpenter and her team decided to do a story on Newark as a tourist destination rather than a place that flies you to them.

“I had come to Newark 100 times, but always to the airport,” she said during an event to promote “Newark: Three Perfect Days,” the cover story in this month’s issue.

“I never got off one stop earlier until last summer, when we finally decided to do this story.”

The resident of Manhattan said she is glad she did.

“Discovery is what drives travel journalists,” she said. “What’s new? What’s next? What’s exciting? I know Newark isn’t new, but I feel what’s happening here is new and it’s inspiring. The creativity, the passion, the pride — combined with this rich history — (makes it) a city in the midst of a renaissance.

Changing the perception of the city is her most important task.

“We run interference all the time on our social media platforms,” she said. “We’ll do a promotion or a contest, and people will say, ‘Oh, I’m never coming to Newark. That place is a dump.’

“And we immediately come back and say, ‘When is the last time you’ve been to Newark?’ We flip it — and we have to do it really quick, so it doesn’t spread.”

The numbers say Aaron’s team has been doing a good job.

Hotel occupancy in Newark is up by 4 percent so far in 2019.

And the city already attracts more than 1 million overnight visitors a year — which helps to generate more than $8 million in tourism annually.

Newark soon may be getting much more of both.

In addition to the cover story of the magazine, which was placed on United Airlines planes March 1 and will remain there all month, there was a lengthy video on the city, which also will be available to fliers.

United officials estimate the magazine will be seen by nearly 12 million travelers, while the video will be accessed by more than 2 million.

Aaron, who hosted a breakfast for more than 100 at Nico Kitchen & Bar at the New Jersey Performing Arts Center earlier this month, said she felt it could have a huge impact.

“This is a fantastic day, because there’s been so many naysayers that say Newark can’t compete,” she said. “There are so many people who look at Newark as a travel stop or a bus stop.

“This is an opportunity to show Newark to the world. To show people who have not seen or had the old perception of Newark to get a chance to see it and watch it and view it for themselves.”

The story details the city as a tourist destination, highlighting its history, its modern resurgence and its diversity.

It features pictures and stories on sites such as the Cathedral Basilica of the Sacred Heart, Branch Brook Park, Riverfront Park, the Lucent Technology Center for Arts Education, NJPAC, the Prudential Center, the Newark Museum, the Grammy Museum, Broad Street Station and the Paramount Theater, as well as the Ironbound and other areas.

The inside of the Newark Public Library is featured on the cover.

Jill Kaplan, president N.Y./N.J. for United Airlines, said featuring Newark in the magazine — and placing it on the cover — is symbolic of the city’s rise in stature.

“(It’s) the magic that I feel in Newark. And being able to bring to life and be able to share with the world with our customers how you can enjoy culture and the arts, eat so incredibly well and see the incredible development that is going on … is a testament to the spectacular elements of what’s happening here in Newark.”

Aaron said working with United Airlines and others is the key to helping Newark promote itself.

“This is something that we cannot do alone,” she said. “For those who work in this industry, you know, it is a very concerted effort.

“Our primary goal is to promote Newark as a travel destination. And we do that through our partnerships with our airlines, with our hotels, with our attractions, with our small businesses, that creates demand for the public to look at Newark for the first time and creates an opportunity for people who haven’t been to Newark for a long time to come and see this place from a very new perspective.

“These types of partnerships will allow Newark to thrive and allow us to live, work and play in that space that we’ve been hearing about so often.”

“Tourism in Newark supports over a thousand jobs,” she said. “So, when you’re in a restaurant and you’re in a hotel, these are the people who are in the front line to the window to the visitor and their experience when they come to Newark.

“Over $8 million in economic impact comes from … the tourism industry. This is something that the city welcomes openly. And this is why, when you hear of new growth in hotels and new growth in restaurants, you can understand that there’s a pulse here and a need here for more people to see this city for the first time.”

People such as Richard Morgan, the writer of the story.

Morgan had lived in Newark previously — in the Ironbound section. But he admitted he knew little of the city that wasn’t on the walk from his apartment to Newark Penn Station.

The story, he said, gave him a second chance.

“As a travel writer, you’re often playing within the boundaries of other people’s bucket lists,” he said. “You are going to Paris or Venice not because you want to go, but because readers want to know about those places because they’ve been told about those places for ever.

“What was appealing about Newark was that we had the chance as creatives to add something new to those traditional conversations. We had the chance to play a part in the readers’ sense of discovery and adventure in this overlooked city.”

“He said, ‘Newark has the energy of emergence, which is the true energy of beauty.’

“One of the reasons that bucket list can be put off is because you can go to Taj Mahal or the Golden Gate Bridge because it’s going to be the same in five or 10 or 20 years,” he said. “Newark is in this moment of really electric renaissance.

“It’s going to really change in five or 10 or 20 years, but you really want to be a part of it now. That’s what I hoped we related in the story.”

Aaron can only hope it will be another factor in changing the perception of the city — especially for a new generation.

“We have this window. I find we’ve got people who have a negative perception in Newark, or they have no perception of Newark. We have a chance for a generational shift. Those who are in my generation say, ‘I think I know about Newark, but I haven’t seen anything or heard anything for a long time.’

“Where we’re really making a difference is that we’re talking to those people who have no perception.”