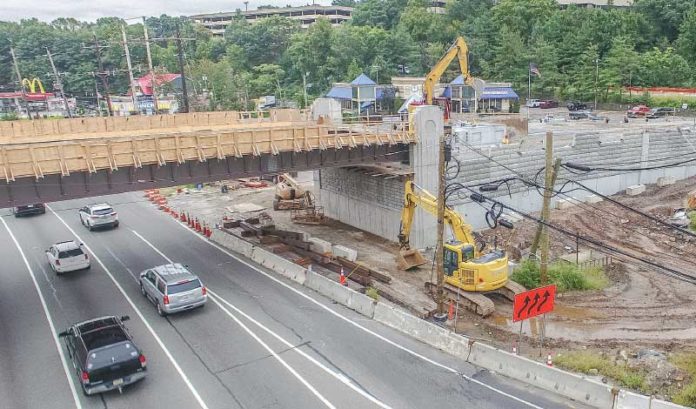 Six Brothers Diner, long a favorite of those traveling east on Route 346 — or those traveling down the hill from Montclair State (either by car or foot) — is still there.

And, if you can see it, you can’t figure out how to get to it.

A much-needed overpass construction project is helping traffic flow in the area — one known for accidents, as it is right before Route 46 intersects with Route 3 at Valley Road.

But it is killing a business at the same time.

George and Katy Stylianou’s business. The one the couple has gladly and eagerly worked at almost day and night for more than 20 years to support themselves and put their three kids through college.

The one they hoped — after signing a 10-year lease shortly before the project began — would help them create a retirement nest egg.

The project, which started in early 2016, was supposed to be finished by last summer. It still isn’t.

And, as the Stylianous have watched months turn into years on an overpass that has made their diner almost invisible from the road and difficult to enter once it does come into focus, they can’t help but feel they are seeing the end of their business.

“Our gross sales are down approximately 30 percent,” George Stylianou said. “What that does is eliminates any kind of profit. We barely can pay our insurance or taxes. Forget about taking money home.”

Finding a solution won’t be easy.

The Stylianous were not surprised by the project.

“We knew about the construction coming of the highway expansion, but we had no idea this would happen,” George Stylianou said. “They said overpass. They didn’t say a wall blocking our view from the highway.”

The project seemingly has been beset with problems from the beginning, which is why it is more than a year behind schedule.

The location has been an issue.

The diner is located in Little Falls. Right down Route 3, where Valley Road intersects in a junction with Route 46, is Clifton.

The sewer lines near the diner connect to Clifton — and are part of a maze of lines that seem to connect in the area. That led to a problem.

“When they were working in the parking lot, they damaged the sewer line,” Stylianou said. “It started to overflow. In order to stay in business, you’ve got to have running sewer for the bathrooms. Right away, we did the work. It cost $5,000 to replace 40 feet of sewer. We knew they were working in that area. The state wrote the check.”

However, the state has not always been as accommodating, Stylianou said.

“When they reconfigured the property, me and my wife said we have to do something about this to make the property more alive,” he said. “So, we did the landscaping and it cost us $6,000. They refused to pay it because they said it was never negotiated.”

Steve Schapiro, director of communications for the Department of Transportation, said the agency has been working with the property owner throughout the process.

“The property owner has always known about the location of the new Clove Road overpass and that the driveway from Clove Road would be eliminated. To mitigate that loss, the department is building a pedestrian walkway along Clove Road from the college and train station. In addition, part of the mitigation for the property owner included NJDOT acquiring the former gas station in front of the diner to replace lost parking spaces and moving the diner’s driveway on Route 46 further east to a mutually agreed location for safety.”

Stylianou has nothing but good things to say about the contractor, Joseph M. Sanzari Inc., which is doing the work.

“They are very professional, very respectful,” he said. “It’s not their fault. They are just doing their jobs.”

But the works requires trucks, which require places to park.

“There are times that that the heavy equipment overwhelmed the whole parking lot,” he said. “Who’s going to come, especially on the older person, when they see that?”

Here’s the biggest problem for the Stylianous.

Even when the project is completed, their business may not be able to recover.

“The biggest thing is the visualization,” George Stylianou said. “You used to be able to see us coming down the road. Now, you can’t see it. Even if you know it’s here, it sneaks up on you.”

“For the regulars, who are not as thrown by the visibility, it’s the access,” he said. “For the drive-by customers, it’s the visibility. If you don’t know we’re here, there’s not enough time to stop if you see it at the last minute.”

The access is so bad that Stylianou said he is losing money on pick-up orders.

“People will order pick-up at night and then a half-hour later they would call us and say, ‘Sorry, I can’t figure out how to get to you,’” he said.

Business off Clove Road — which comes down from the Montclair State campus and the nearby train station — also has been hurt.

Not only are fewer students coming down the road, those who used to use it as an alternative entrance can’t do that anymore, either.

The diner, which used to have two entrances to its lot, now has one — and it’s on Route 3.

“The way they designed the entrance and the exit of the diner, and the ramp coming from the college and the train station, has them all coming together with people trying to get off and people trying to get on the highway,” he said. “It’s a disaster. People tell us, ‘We don’t want to come to you,’ or, ‘Oh, my God, I almost got into an accident.’”

It only gets worse.

If you put Six Brothers Diner into your GPS, it will direct you to the old Clove Road entrance — the one that no longer exists.

Don’t let the name of the diner fool you. Neither of the Stylianous has five brothers (the previous owner named the diner).

They are the only leaders of this diner.

They are proud of their business. Proud of the fact it helped them put three kids through college.

Now in their 50s, the Stylianous thought they could use the next 10 years to prepare for retirement. That’s why they renegotiated their lease for 10 more years in 2014.

“We have no retirement savings,” George Stylianou said. “We were counting on (how) the same way we bought the business, we could sell it somebody else and that will give us some kind of retirement. So, that’s what we were counting on.

Stylianou is not even sure the diner will make it until 2024.

Many of the regulars, he said, are gone. And he doesn’t think they will ever come back.

“Our older clientele finds it very difficult to come here,” he said. “And since it’s been over two years, I know they’re not coming back. They’ve found another place.

Many of the longtime staff that is the heart of any diner have left, too.

“They can’t make as much money,” Stylianou said.

Turnover among replacement hires is high, too.

Stylianou said the landlord on the building has reduced their rent because of the issues, but he knows they cannot simply close down.

His only hope is that the state will fix the access problem in the future.

“They say this is Phase 1 and that there will be a Phase 2,” he said. “But I don’t know when that is coming or if there is anything they can really do.”