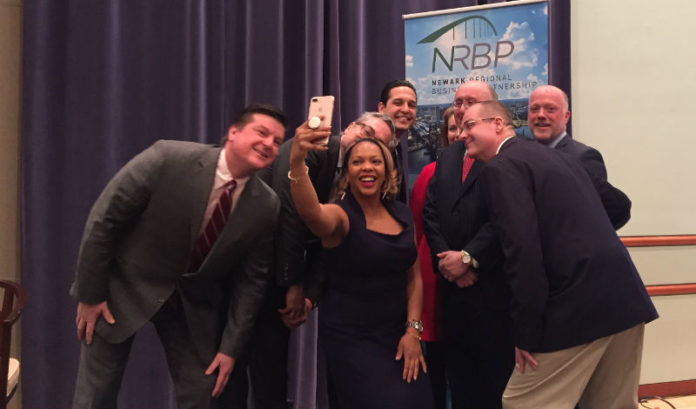 But don’t be confused, the Newark Regional Business Partnership’s always-anticipated annual Newark Real Estate Market Forecast event was not a downer. In fact, it was filled with optimism like never before.

A panel of development industry leaders and a room full of stakeholders frequently used the word “bullish” to describe their take on the city’s current economy and future.

It’s a phrase the veterans in the room said they’ve been waiting a lifetime to hear.

Ferruggia, a longtime partner and real estate attorney at Newark-based McCarter & English, said he is astounded by what he is seeing.

“You could never have envisioned some of the things we are saying in Newark today if you were here 40 years ago,” he said. “These are dramatic, dramatic developments.

“Is there more to be done? Of course. But we’ve come an awfully long way and we want to celebrate the progress that we’ve made.”

Progress can be marked in a lot of ways.

Richard Dunn, senior vice president at Paramount Assets, discussed how his firm has made a big push in Newark in recent years because of the city’s momentum.

John Saraceno, co-founder and managing principal of Onyx Equities — the group that led the recent purchase of One, Two and Four Gateway Center — said his group is all-in, too.

Newark, he said, is where it’s at.

“The thing that Newark has — and there’s not another city in the state that comes even remotely close — is the HQs that are in this city,” Saraceno said. “You have Prudential, you have Panasonic, you have Audible, you have PSE&G. Mars is coming here.

“Think about that, there’s not another urban community (that can match that). The idea that this is their location is profound. You talk about cultural assets, you have the Prudential Center and you have (the New Jersey Performing Arts Center). Those two don’t exist in the same anywhere else. I mean, they’re here.”

So are the dogs.

Tim Lizura, a longtime leader of the state’s Economic Development Authority and the current head of real estate and capital projects at NJPAC, said that means a lot.

“People will talk about the stroller test: Do you see people walking downtown with strollers?” he said. “We’re not there yet downtown, but you know where we are: We are seeing people walk around with dogs. And you can’t get the strollers until you get dogs.

“I will tell you, at night, in the morning, I see people in the afternoon walking dogs, and that is a huge bellwether for the success of downtown.”

Another marker was being named one of Amazon’s 20 finalists for its HQ2 second headquarters project.

And even though the city wasn’t ultimately selected (though some feel that process is still going on), Peter Bronsnick, an executive vice president at SJP Properties, said Newark may be better off in the long run.

“To me, there is a silver lining — and a tremendous one — considering the efforts of everyone in this room and the efforts of the people that were directly involved,” he said.

“I personally want to see a more diverse tenant base (rather than relying) on one tenant and one company to transform a city. I think we can do better. And I think that the efforts of everyone in this room is going to get us there. I’d like to see life science, I’d like to see technology, I’d like to see financial firms.

“To me, (Amazon) is somewhat of a blessing in disguise. What it taught us was how effective we can be when we combine our efforts and the different groups within Newark that collaborated to get that done.”

“We’re very bullish on Newark and the market here,” he said. “However, there are going to be pitfalls, and we need to work collaboratively with one another.

“We also need the city to stay consistent. They need to stay on track with their vision as well, and work with developers and business here in Newark to ensure the viability of the future.”

The future, the group said, was bright.

Karl Paul Frederic, partner at Windels Marx Lane & Mittendorf and longtime observer of Newark, said he can feel the difference in the city.

“I don’t really rely in my view of Newark on data or analysis and reports,” he said. “I go more from my gut and my instinct of what I see as a lawyer and as chairman of (WGBO) Newark public radio. And my instinct is that every trend that forms the revitalization of a city is positive and going exactly the right direction.

“All we need is a little bit more momentum. And we need to get the message out that Newark is a place to do business and a place to live and a place to come to for entertainment and culture.”

Ferruggia said the momentum of the city can be easily tracked in what wasn’t said as much as what was said.

“I find it interesting — and I’ve been coming to these panels for many, many years — that, this year, not a single member of the panel mentioned crime and security as an issue with respect to development,” he said. “And I think that speaks volumes.