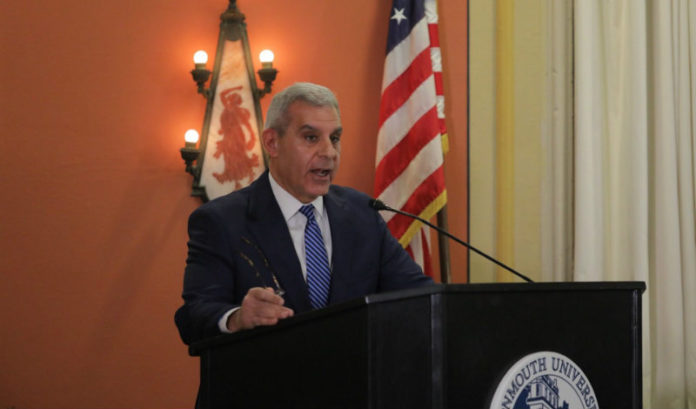 Even though New Jersey’s economy is doing well now, there are significant short-term improvements that can be made.

Observing long-term behavior is key, too.

“I have two (things) when I think about the state’s economy: what happened and what’s happening,” former state Sen. Joseph Kyrillos said Thursday at Monmouth University.

This was, in a sense, what Kyrillos and the speakers at Monmouth’s panel discussion, “Jobs, the Economy and Global Competition: New Jersey and the Macro Economy,” were illustrating to the audience of around 65 students, faculty, trustees and community members gathered in the university’s Wilson Auditorium.

Kyrillos, who spent most of his 30-year political career in the state Senate, said another key indicator that people don’t acknowledge is how the state is losing wealth to other places.

From 2015-16, which Kyrillos said is the most recent data, New Jersey ranked third in the nation for gross income lost, with $11 billion total that left the state, equating to a net loss of $3.5 billion. Only New York and Illinois were worse, he said.

A Washington, D.C.-based think tank, the Tax Foundation, ranks New Jersey as the worst state in the country for business climate.

Gov. Phil Murphy’s plan to add another tax and put a cap on economic incentives, Kyrillos said, will hurt the state. He said companies such as Panasonic would neither be here to begin with, nor stay here in the state, if it weren’t for the incentives.

Despite this, Kyrillos said he remains bullish on the state.

“(With) an educated and sophisticated workforce, a great strategic location and high quality of life, we want to build on those attributes and successes,” he said.

Tashiro said there are pockets of New Jersey, such as Cape May and Atlantic counties, that are still struggling with unemployment. He also said there has been a sharp decline of employment in the manufacturing sector, yet rapid growth in service-providing sectors.

“One thing we have to recognize is that there are pockets in the state that are still struggling, especially southern counties,” Tashiro said.

Maher said the two industries to focus on are health care and transportation. And he said the health care industry is still an important part of the state’s economy.

“What we should think about is: What are the things that can impact the New Jersey economy? There are two sectors that are pretty obvious that I can draw your attention to. The first is health care; (the other) is transportation,” he said.

Taylor said unemployment rates are good, but they don’t show the whole truth. He said there are many employees who are overqualified for the jobs they’re doing, but who aren’t qualified for other open positions.

“Unemployment is a very nice and attractive number, but that unemployment number doesn’t show what’s under the surface,” he said. “There’s a tremendous amount of underemployment, people (overqualified) for the positions they’re in.”

The panel is the third in a series of four as a part of Monmouth University’s public servant-in-residence program this school year. The program was created in 2000 so public officials would have a space to share their expertise with students at Monmouth.

Former New Jersey Govs. Jim Florio and Christine Todd Whitman, as well as former Chief Justices James Zazzali and Deborah Poritz have all been a public servant-in-residence at Monmouth.