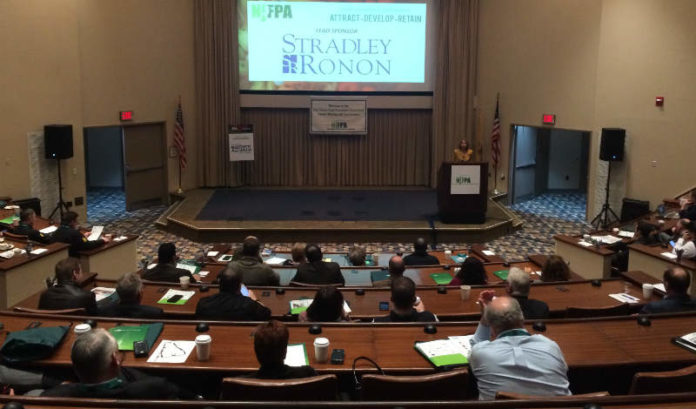 When it comes to training the next generation of skilled workers, companies need to be front and center, leading the charge.

“My big ask from you is I need you at the center of the table,” said New Jersey Business & Industry Association CEO and President Michele Siekerka.

Siekerka was speaking to an auditorium filled with over 100 food and beverage business professionals Friday at the New Jersey Food Processors Association’s 2019 Annual Conference at the Crowne Plaza Princeton in Plainsboro. There, she delivered the keynote address.

She was echoing something that’s been on repeat recently in New Jersey’s business community: The state is doing well, but could be doing much better.

“This requires some time, it requires an investment and some money,” she said. “But, if you can help to inform your future workforce, think about the return on investment that it would have for you.”

Sierkerka, like many others, praised the state’s location and access, and applauded, as she puts it, vibrant metropolitan areas on the rise such as New Brunswick, Newark, Long Branch and Camden. But she criticized, just like those same people have, the state’s affordability and business climate.

“When an overwhelming majority of graduates, when they are the largest percentage of a moving population leaving the state of New Jersey, why are we not concerned about that?” Siekerka said.

Sierkerka said the state also is losing a lot of K-12 students to higher education institutions outside the state, particularly Pennsylvania, Delaware and Southern schools.

“Driving up and down the Jersey Turnpike, I see billboards from Pennsylvania schools and the University of Delaware,” she said. “Our own schools don’t do the greatest jobs at recruiting kids.”

She said the state needs to establish a brand for higher education and post-secondary education, because, as she puts it, what kid can’t get behind a message like Penn State’s “We Are!”?

But it’s also the price of New Jersey’s colleges and universities. Students can drive just a state over and get a cheaper education in Pennsylvania.

Disinvestment from technical and vocational schools does not improve the situation either, Siekerka said. Companies need to invest in experiential learning, apprenticeships, internships and summer opportunities.

She said they also need to be honest with the next generation of workers, because they’re dropping out of school with incredible amounts of debt. This generation is the largest living at home right after graduation, she said.

But Siekerka remains very bullish on New Jersey. While very practical on New Jersey’s business climate and how there are many improvements to be made, she said the state’s post-secondary education and diversity make it worth fighting for.

“Alumni from our institutions (have) the highest salaries across the nation,” she said. “Our graduation rate from post-secondary education is the second-highest.”

The focus of the conference was attracting talent in a competitive labor market, the best practices for developing future leaders and retaining talent with a focus on total well-being.

NJFPA is a Trenton-based organization of manufacturers and suppliers of food and agricultural products joined to promote best practices, share information and expand the food industry of New Jersey and the surrounding region.