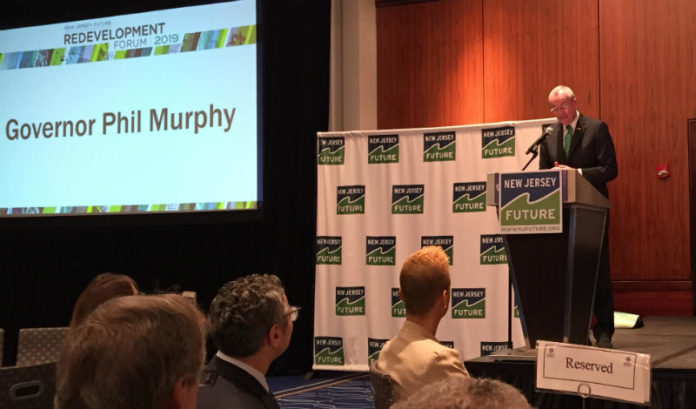 As the hecklers and protesters continued to scream at him from 20 or so feet away, Murphy didn’t lose his cool, didn’t raise his voice, didn’t — as he, himself, pointed out later, tell them to “Shut up and sit down.” He just continued on with his remarks at the annual New Jersey Future Redevelopment Forum at the Hyatt in New Brunswick.

But he threw in a little dig, too.

“I hope you’re protesting the governors of Oklahoma and Texas, too,” he said.

Murphy went on with his remarks, talking about creating a more sustainable state, rebuilding mass transit and investing in clean energy. He reiterated his support for incentives — and his belief that incentives alone are not enough to grow the state.

And he reiterated his ultimate dream.

“We have put such a focus on taking a longer view and thinking of the New Jersey we want to be in five or 10 years or beyond, not just this year or next year,” he said. “It’s why I signed an executive order for the Board of Public Utilities to create a new energy master plan to help us achieve our goal of a 100 percent clean energy economy in New Jersey by the year 2050.”

The talk was nothing new for the more than 600 people in a standing-room-only crowd.

The fact that a sitting governor was at the forum, was.

“We’re really excited that this governor is very much aligned with our smart growth redevelopment agenda,” he said. “When we have conversations with him and his staff, they’re all saying the right things, they’re all going in the right direction, policy-wise.

“Now, it’s a matter of starting to put the wheels of government and the gears of government moving in the right direction so that we can start getting action quicker than we all that we have in the past.”

Murphy’s 18-minute speech was right out of the NJ Future playbook.

“We are committed to achieving the vision of a more sustainable future that is shared by everyone in this room,” he said. “A strong New Jersey is more resilient, it runs on clean energy and is home to thriving and dynamic downtowns where people work in both new buildings and historic ones refurbished for tomorrow.

“A stronger New Jersey has safe and reliable mass transit for people to get to school and work and serves as anchors for smartly developed communities.”

Kasabach was thrilled to hear it.

“This governor is moving more in the direction of being very environmentally responsible, very community-oriented,” he said. “We’re now looking more broadly at how economic development can affect more people.

“So, it’s a shift. And the policy shift moves it in a little bit in a direction. It will never go as fast or as far as people want it.”

Murphy laughed off the group of protesters — as well as another who interrupted the speech from the back of the room later, saying there always is room for alternative ideas.

Kasabach said it comes with the territory.

“I think it’s true in any policy world you’re in, there’s always going to be two extremes,” he said. “And there are extremes on both sides. And we’re very comfortable that those extremes keep coming up and they keep making their case, and we’re comfortable with the governor moving in the direction that he’s moving.”

NJ Future, after years of feeling as if it didn’t have a voice, is just glad it has one again, Kasabach said.

And, judging by the record crowd — the conference actually closed registration earlier in the week — Kasabach feels the voice is gaining strength.

“When the policy winds are blowing against you, you have your hardcore folks who are working with you and you’re fighting the good fight,” he said.

“Once the winds start blowing in your direction, you start to create new allies, you get new opportunities to work with people. That part has been very good.”

Even if it means you have a few blowhards trying to interrupt your event.

Garden State Film Act will be great for Jersey. I know....