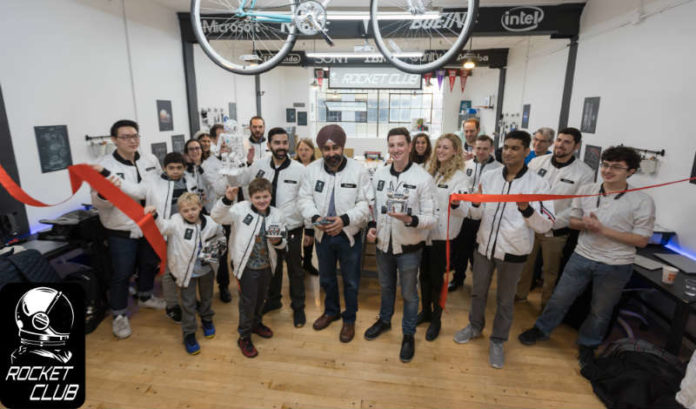 Alex Hodara said he was amazed with the technology that students were creating after he was asked to sponsor a technology-based “hack-a-thon” at his alma mater, Westfield High School, one year ago.

“More than 50 kids showed up to create robotics and mobile applications, including artificial intelligence,” Hodara said.

However, in seeking more involvement afterwards, Hodara said he grew disappointed with the overall lack of after-school programs focused on science, technology, education and mathematics, or STEM, especially when such well-paying and important STEM-related jobs are in high demand today.

“I wanted to give kids the education they need to get the jobs of the future or to start companies with products and technologies that we cannot even think of yet,” Hodara said. “That was my goal.”

Hodara therefore founded Rocket Club, a robotics, coding and entrepreneurship club in Hoboken for children ages 9 to 14, to create opportunities he wished had existed when he was a kid, he said.

“By building, coding and marketing robots, our members will be performing at a different level than their peers and even most adults, all while having fun,” Hodara, founder and owner, said.

To celebrate the launch of Rocket Club’s inaugural class this week, Hodara and Rocket Club’s president and director, Paulo Nunes, have pledged a total of $10,000 in prize money to at least three children when the class concludes in June, to be used as an investment with which to launch their own businesses or obtain patents.

“Our mission is to rid kids of any limiting beliefs when it comes to developing emerging technology or starting a business,” Nunes said.

As entrepreneurs themselves, Hodara and Nunes said they know this is easier said than done.

As owner of the Hodara Real Estate Group — a Boston-based real estate development and management company Hodara founded as a student-run brokerage in 2008 while still a junior at Boston University — Hodara purchased, renovated and rented his first property in 2011, shortly after being named to Forbes’ “30 Under 30” real estate list.

Today, Hodara has developed hundreds of rental properties between Boston and Jersey City, while residing in New York City.

That, Hodara said, is how he met Nunes, a general contractor and owner of PJN Construction, with whom Hodara has developed real estate with in Jersey City for more than two years.

“We started to talk about how we might be able to open some sort of club for kids to pursue some advanced learning,” Hodara said.

Hodara said their subsequent research into various STEM-related franchises proved fruitless after they could not find one that truly matched their vision.

“I have nephews, and it can be frustrating when they sit behind screens all day,” he said. “We wanted to do something more hands-on that included robotics, coding and entrepreneurship.”

Hodara said he ultimately decided to fund and create the club himself with the help of Nunes, who, as a mathematically- and scientifically-inclined student in Newark, was exposed to robotics at Science Park High School.

“I knew from my own personal experience at the age of 14 that robotics is what would engage these kids the most,” Nunes said. “The physical representation of the concepts we were working on was one of the best ways for me to understand them.”

But Nunes said the metrics regarding attention spans today have only grown worse since he and Hodara were kids.

“A big part of what we wanted was to make sure the club was an opportunity to ‘hack’ the learning for these kids, to make sure they are engaged, challenged and having a good time,” Nunes said. “We knew capturing and maintaining kids’ attentions was going to be the challenge.”

Nunes said he and Hodara were therefore inspired by For Inspiration and Recognition of Science and Technology, or FIRST, a nonprofit international youth organization in Manchester, New Hampshire, that operates FIRST Robotics, FIRST Lego League, FIRST Lego League Jr. and FIRST Tech Challenge competitions around the world.

“The FIRST Robotics Competition, for example, is an international platform for competitive robotics for kids ages 6 through 18 at varying levels of difficulty,” Nunes said. “We were inspired by FIRST Robotics to entice excitement by pushing the level of innovation to something that was going to pay dividends in the actual child’s experience.

“We never wanted anyone to leave Rocket Club to then describe their experience that day as ‘fine.’ It needed to be much more than that.”

Rocket Club’s curriculum is therefore developed and instructed with other members of Forbes’ “30 Under 30” lists, as well as those involved with the FIRST Robotics Competition, iRobot and the National Aeronautics and Space Administration.

“We designed our curriculum around friendly and cooperative competition to tap into a child’s creativity and drive,” Hodara said. “For example, we created this internal mock-economic system called Rocket Fuel, in which kids can earn units over the course of each level to then use for prizes such as drones or to hire their friends to help them consult on their projects.”

Students can earn Rocket Fuel through a number of different ways, such as attendance, robotics competitions, consultations within a classroom and moral objectivism, Nunes said.

“If students become particularly good at something, whether they be a master builder, coder, debugger or more, a classmate can draw up a business contract to then hire that classmate as a consultant,” Nunes said. “We also want to help create not just people who are good at robotics, coding and business, but also good people. So, like in video games, we have hidden objectives within the classroom, such as, the first one to work as a consultant for free will earn double the previously arranged Rocket Fuel.”

Hodara said that, in addition to access to laptops, Lego MINDSTORM EV3 kits, augmented and virtual reality equipment and a 3D printer, kids in the classroom can track how much Rocket Fuel they have earned via a large digital leadership board.

“If you ever have played in a sports league where you were always looking up your stats, you know that this experience is similar to that,” Hodara said.

“We wanted to capture that same sort of microcompetitive environment to help breed innovation and push each other within the classroom to develop new ideas and innovate in new ways,” Nunes said.

Then, at the end of each level, there is a robotics-based, “Shark Tank”-style business competition, Hodara said.

“Each kid will come up with their own robotic design, creating anything from an autonomous vacuum to a remote-controlled racing car,” he said. “We then help them put together a business plan with a simple financial model, branding, comparative pricing, product positioning and more before they pitch their idea to three fellow Forbes ’30 Under 30’ entrepreneurs.”

The first month of Rocket Club is free for all current members, Hodara said, with the cost hovering around $395 per month afterwards, in line with other after-school programs in the area.

“We wanted to make sure both the kids and their parents were loving the club,” he said.

Hodara said it is his hope that kids will grow up from the club into college thinking about graduating into a STEM-related field instead of one that may not yield the same results.

“We give out jackets to our kids, hoping they will wear them proudly, like varsity jackets,” he said. “Our goal is for Rocket Club to become the cool thing to do.”

After promoting Rocket Club for only three weeks, Hodara and Nunes were able to max out their first class with 30 students.

“So, I think that we’re definitely getting there,” Hodara added.

While Hodara said membership will remain small, in order to give the kids in the club the best experiences possible, Rocket Club does intend to open up 10 to 20 additional memberships in September and maintain a wait list.

Nunes said the results of their opening could not be any better nor clearer.

“All you really need is the know-how and imagination to change the world,” he said.

Alex Hodara, founder and owner of Rocket Club in Hoboken, said the surrounding neighborhoods have been incredibly supportive.

“We therefore want to offer free classes to the community to be able to give back,” he said.

Paulo Nunes, president and director, agreed that Hoboken is an amazingly helpful place.

“We’ve even had a few local business owners reach out about potentially sponsoring underprivileged kids,” he said. “These are people who honestly appreciate what we are doing and want to get behind it and that is one of the most humbling things.”

Visit officialrocketclub.com to learn more about Rocket Club in Hoboken.