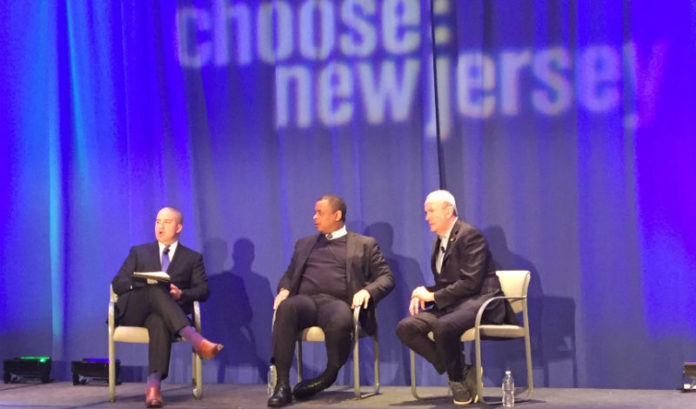 Gov. Phil Murphy announced the state will award five $100,000 grants to the communities around the state that come up with the best game plan for how they plan to use Opportunity Zone investments to better themselves.

The plan, which will be formally announced Monday afternoon, was explained at the Choose New Jersey Opportunity Zone Summit in New Brunswick.

Murphy, in a lunchtime discussion with former U.S. Secretary of Transportation Anthony Foxx that was moderated by Choose New Jersey CEO Jose Lozano, said he hopes the state program will spur communities to quickly analyze their ability to create Opportunity Zone investment opportunities.

“I think it will have an added element and benefit of communities thinking earlier than they might otherwise would have,” he told a sellout crowd of approximately 500.

“Is it an affordable housing opportunity? Is it a commercial or retail business that we want to attract? Is it some sophisticated plan to stack incentives?”

The Opportunity Zone program, which was co-sponsored by U.S. Sen. Cory Booker (D-N.J.), enables those with capital gains to 1) reduce the taxes on realized gains if they invest in Opportunity Zone parcels; and 2) have the potential to eliminate all capital gains taxes on investments in those areas, depending on how long the investment is maintained.

Opportunity Zone tracts, determined by poverty statistics, were designated in 75 municipalities across the state.

The event, which brought together a cross-section of developers, municipal leaders and business heads, was an attempt to further explain what some are calling the best investment opportunity in underserved communities in a generation.

New Jersey Economic Development Authority CEO Tim Sullivan said the grant program is being introduced to help streamline the thinking around the program around the state.

“As you travel around the state and meet with mayors and folks who are excited about the opportunities on an Opportunity Zone, you hear a what I would characterize as general support, but a little bit of uncertainty about, ‘What does this even mean for my community?’” he said.

“I think what’s going to help differentiate New Jersey, and what Gov. Murphy wants us to do to help us lead the pack nationwide, is build and offer investors a roadmap. This is what community A, B or C would like to see happen at parcel X, Y or Z. Not just, ‘Help us make something better happen here.’

“An investor is not going to take the time to figure out, ‘Hey, this is a good site for affordable housing or mixed-use community or retailer or a bowling alley,’ or whatever the right use might be.”

Sullivan said the EDA will soon release a request for proposal and hopes to move quickly when awarding the grants.

He said the grants will help communities better prepare their proposals for potential investors. More so, it will put the power of the proposal in the hands of the right people.

“The folks who are on the ground and the folks that are elected to represent those folks, have the best likelihood of putting together a plan that is going to have community support and have something that’s ready to go for investors,” he said.

“The output or the work product from these grants will be the ability of a mayor to produce a plan or a prospectus that they can hand to an investor saying, ‘If you’re an investment opportunity fund that wants to make an investment, here’s what we’d like to see. Here’s a menu that you can order off.’”

Sullivan said the EDA will lead a large group of agencies overseeing the awards, including Lt. Gov. Sheila Oliver at the Department of Community Affairs, Leslie Anderson at New Jersey Redevelopment Authority and the Governor’s Office.

Murphy, however, cautioned that the state wants to get this once-in-a-generation opportunity right.

“There’s an unmistakable amount of capital that wants to play here, but it has to be in balance,” he said. “I would just beg that we all have a smart process together, not just in this competitive grant.

“(We need) to make sure we’re all creating communities in these census tracts, which are by definition high poverty, that are the communities and the neighborhoods and the realities that we want to create, not just what might be on demand.

“That’s the great thing, when there’s a good balance between supply and demand, which there is in this case. There are lots of communities that want to develop these tracts and there is a lot of capital. But getting that right, is really important.”

Finance
Linda Lindner -
October 27, 2021
Cross River Bank on Tuesday announced it expanded partnerships with both Operation HOPE and the Memorial Foundation in order to bring access to financial...