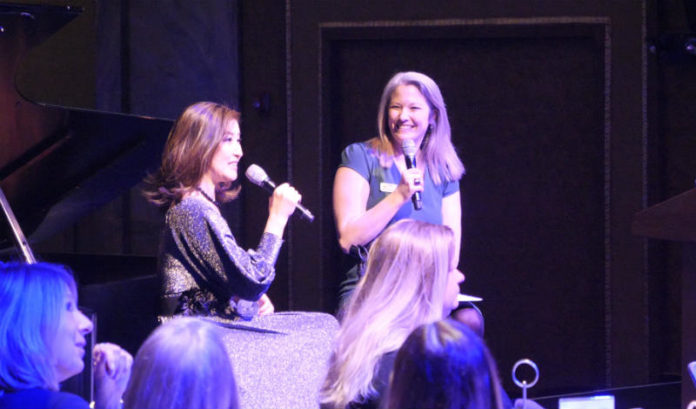 More than 100 businesswomen attended the third annual Women’s Tea on Tuesday, held on the stage at the nearly century-old State Theatre New Jersey in New Brunswick.

“I’m thrilled to welcome you here today to celebrate Women’s History Month and the importance of the performing arts in our lives,” Sarah Chaplin, the first female CEO and president of State Theatre New Jersey, said. “Access, diversity and inclusion are key to State Theatre New Jersey’s mission, as we believe the arts can bring us together as a community to celebrate, explore, break down and break through barriers.”

Min Kwon, a professional soloist and chamber musician who has performed in 62 countries and all 50 states of the U.S. — including at venues such as Carnegie Hall, the United Nations in New York and Alice Tully Hall at Lincoln Center — played piano compositions from around the globe for attendees.

“When I was training, the goal was to win international competitions, play at Carnegie Hall and tour with the New York Philharmonic,” Kwon said. “But those were very narrow goals that ended up making me very unhappy.”

Kwon said when she opened her mind to the more expressive and community-based aspects of classical music, she grew happier. Now, as a professor of piano at Rutgers University’s Mason Gross School of the Arts, Kwon said she instills this idea in her students.

“We do not train to perform for only those few lucky people who can purchase tickets,” Kwon said. “Our job is to go out and reach everyone with our music, and the closer we get to our audiences, the stronger the impact will be.”

Kwon said she therefore established the Center for Musical Excellence, a nonprofit in New Vernon, to help support young artists such as Enriqueta Somarriba, a young pianist and doctoral student of Kwon’s who performed with her at the Women’s Tea.

“I, too, was once a student and struggling young musician and I wanted to do something to help not only the young artists who come to study with me in my studio, but all of the young artists I’ve seen coming and going, auditioning for different schools and performances, filled with such dedication and passion,” Kwon said. “I wanted to help them fulfill their dreams.”

In addition to providing financial support for performances or musical projects proposed by young artists, the Center for Musical Excellence also provides mentorship and career guidance for young students.

“When you graduate as an artist, you go, ‘What now?’” Kwon said. “I’ve had great lessons on how to play Beethoven’s sonatas better, but that didn’t help me to know what to do when I graduated.

“There was an immediate need to help train these young people in that.”

Chaplin also announced the creation of a new Business Council at State Theatre New Jersey this year to provide opportunities for business-minded partners to connect with one another and work together to help continue presenting world-renowned artists and inspiring educational programs.

State Theatre New Jersey provides more than $700,000 worth of free and subsidized tickets to the community annually through its Arts Access Initiative, allowing more than 40,000 underserved children, families, veterans and community groups to enjoy artistic performances throughout the year.