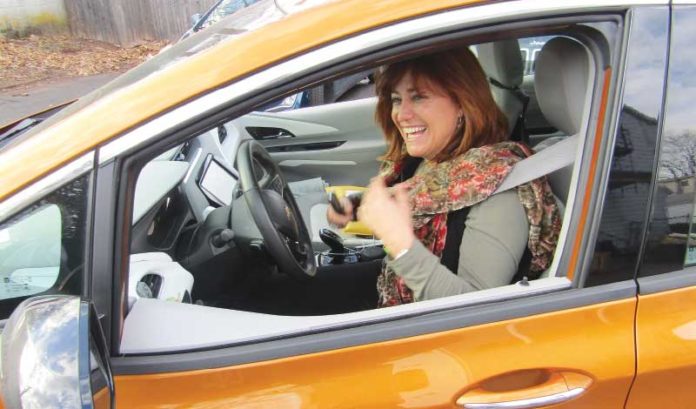 Pamela Frank said the plan is in a proverbial box, wrapped up and with a nice red bow, too.

“Here it is,” she said of the legislation she is championing.

She just hasn’t had any takers. And she’s not sure why.

Frank is CEO of ChargEVC, a nonprofit trade association and coalition of diverse stakeholders with the shared interest of accelerating and expanding the use of zero-emission vehicles (better known as electric vehicles) in the state. She said she is becoming frustrated by the slow road her group is facing.

New Jersey is one of nine states that have pledged to dramatically increase the number of ZEVs in use. The goal is to have 330,000 cars by 2025, Frank said. (The state has fewer than 10 percent of that number now.)

The ChargEVC plan — which comes in the form of Senate bill S2252 and Assembly bill A4819 — is one that could bring widespread electric vehicle adoption to the state, she said.

Key elements of the bill are an EV rebate program; major investments through a public-private development ecosystem in accessible, affordable and convenient public-charging infrastructure; and bold statewide goals for EV adoption, including a goal of 90 percent EV sales by 2040.

So far, she said, there hasn’t been a sense of urgency to act on it. She’s trying to create one.

Frank, who also serves as a vice president at Gabel Associates, an energy, environment and public utility consulting company, sat down with ROI-NJ to discuss the current progress — or lack thereof — on widespread EV adoption in the state.

ROI-NJ: How did you get into the electric vehicle space?

Pamela Frank: In 2009 and 2010, (we) started to look at where emissions were coming from and where the opportunities existed to lower (them). We understood that it was in the transportation sector. We started to think about what would happen if we could foresee mass market adoption of electric vehicles, because we knew the battery technology was going to progress and the costs were going to come down.

Around 2015, we had a line of sight to three vehicles, the Tesla Model 3, the Chevy Bolt and the Nissan Leaf. Those cars have two really important features in common: They get over 200 miles to the charge and the price points were supposed to come in at around $35,000. The average price of a car in the United States is $35,000.

With those three cars, we asked ourselves: What might this mean (for society)?

ROI: OK, we’ll bite. Explain what it would mean.

PF: Look at it as it intersects with our energy systems. If all the electricity load that would be required to fuel these vehicles presented itself to the grid in a thoughtful and planned manner, we could see some pretty significant benefits — benefits that move markets, that allow you to be able to get public investment in an area.

(There would be) ratepayer benefits and other benefits, like lowered emissions. But we were looking at the smallest group of benefactors as ratepayers, and we could expand from there.

That was our intuition, that we could make a pretty good case that, if people start plugging in their cars, it would drive down the cost of electricity for all customers in New Jersey. I could say that 12 times, because it’s not intuitive for folks, (but) more electricity demand because of these cars is going to result in lower electricity costs for everybody.

ROI: What is the game plan to achieve this?

PF: We knew we had a good message, but knew there’s going to have to be some change of law and change in regulation. We realized we had so many different and powerful interests that are going to benefit from this transition: utilities, people that sell the cars, people that make the cars, environmental advocates, consumer advocates, tech companies, software companies, etc.

We have a diverse group of interests, and that’s really good for politics and changing law. Any politician likes to see a group of very diverse interests get together and say, ‘Yes, we support something,’ because it’s a lot easier to get it passed. That was the genesis of forming ChargEVC. We were born in the fall of 2016.

ROI: What kind of support are you seeing in Trenton?

PF: I can’t find one person in legislative leadership yet that says electric vehicles are a bad idea. Everybody likes it. Everybody supports it.

ROI: Then what’s the holdup?

PF: The structure of state government, and not just here in New Jersey but everywhere, is not really well organized to be able to handle opportunities and challenges that cross different sectors. This touches codes and standards. It touches energy regulation, environmental and air quality, transportation policy, etc.

I’m not casting blame on any one individual here, but this is systemic in terms of how our state government operates and how it’s organized. Government moves slow, we all know this. They have very limited resources.

To really make this happen, we need the public and we need our state government to do some things. There are a few things they could be doing that would be hugely impactful, and I’m very frustrated with the pace of that. So, I haven’t seen much on electric vehicle opportunity from the administration and it’s extremely frustrating given all the work, time and resources that have gone into detailing with how this could be done in a thoughtful manner.

ROI: ‘Thoughtful manner.’ Most business executives feel most legislation is not thoughtful when it comes to them. Let’s talk about the impact on the business community, starting with car dealers. What are the obstacles preventing them from selling more electric vehicles, and how are you trying to overcome them?

PF: ChargEVC is partnering with NJ Car and Plug In America. We are going to be rolling out, hopefully by the end of the year, a dealer education program. This is to provide certification to automotive dealers so that they can be better equipped to sell electric vehicles.

People will say that the dealers are the problems (because they) walk into dealerships that don’t have EVs. This is not fair. It takes much longer to sell an electric vehicle than it does a regular car or truck. The dealers aren’t going to make as much money, the margins aren’t as big.

ROI: ‘Internal-combustion cars’: They don’t require constant charging. If you had 300,000 more electric vehicles on the road, where would people charge them — especially in a state where more and more people live in multifamily units and may not have garages?

PF: We have to provide lots of different options for those folks to be able to get access to routine charging. It’s going to create jobs and economic activity in the state. We’re asking for what I would call a seeding. This is the appropriate use for public funding, is really to seed the market. We want to be able to leverage, for every dollar that gets invested by the public sector, we want to see $9 of private-sector investment. There are a lot of companies that want to spend money and they’re raising a ton through private equity. They want to put that money to work.

ROI: How would, or could, that work?

PF: There’s the interconnection with the utility, and that may require upgrades to the infrastructure. So, the utility has to be a partner in that. In terms of the real estate, a land owner can build and own it themselves or they can lease that space to a third-party operator. So, there is some cost for the third-party operator to pay the land owner. But we’ve got a couple of companies that talked to site hosts, like a Starbucks, that may want to entice people to spend time in their establishment by offering charging as an amenity. A supermarket may do that, too.

We have to be careful in terms of the rules and the policies. We do want to be working with the League of Municipalities to educate code officials to get them comfortable and understand what the technology is and what it isn’t, so that they can have a fast-track permitting process.

Murphy tabs The Hub @ New Brunswick to be centerpiece of...